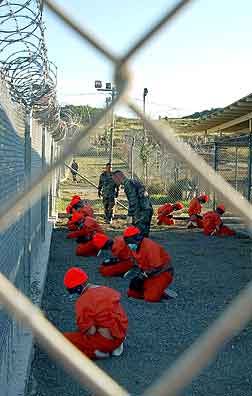 “In my recent posts about the effects of torture on US military personnel at the US facilities where it occurs, I have emphasized that the torture question is more than a question of individual techniques during an interrogation. The interrogation room is only a small part of the regimen imposed on detainees in US custody in Iraq, Afghanistan, Guantanamo Bay, Cuba and Charleston, SC. If interrogators and medics are traumatized not just by isolated atrocities but by the overall environment they must function in, then how much the more so for detainees?

Most people are probably familiar with this image to the right. It is a photograph taken at Camp X-Ray in Guantanamo Bay, Cuba, January, 2002. You might even be familiar with the caption that often accompanies this photo.

Detainees in orange jumpsuits sit in a holding area under the watchful eyes of Military Police at Camp X-Ray Januaryt 11, 2001 [sic] at Naval Base Guantanamo Bay, Cuba, during in-processing to the temporary detention. The detainees will be given a basic physical exam by a doctor, to include a chest x-ray and blood samples drawn to assess their health, the military said. The U.S. Department of Defense released the photo January 18, 2002.

Like many, I’m sure, I had learned to see this photo without seeing this photo. A combination of ignorance and denial led me to assume that the detainees were performing the salat, Islamic prayer. My misconception was helped, too, by the caption, which suggests the guys in orange are all just getting some fresh air while they wait their turns for routine medical examinations. Never mind that the men would probably all face one direction for salat and that they are not kneeling in positions I’ve seen in genuine images of Islamic prayer. 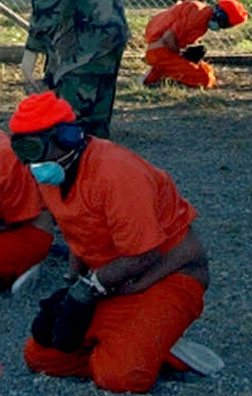 Let’s come in a little closer to get a better idea of what we’re looking at. Perhaps the first thing to note is that this detainee in the foreground, like all the others around him, is goggled and is wearing noise-blocking earmuffs. And yes, his hands are bound, but even more to the point, he is wearing thick mittens, limiting his sense of touch. The surgical masks make breathing more difficult and limit the sense of smell.

Alfred McCoy has explained that sensory deprivation is a cornerstone of US interrogation techniques.

From 1950 to 1962, the CIA led a secret research effort to crack the code of human consciousness, a veritable Manhattan project of the mind with costs that reached a billion dollars a year. . . .

But obscure CIA-funded behavioral experiments, outsourced to the country’s leading universities, produced two key findings, both duly and dully [sic ] reported in scientific journals, that contributed to the discovery of a distinctly American form of torture: psychological torture. With funding from Canada’s Defense Research Board, famed Canadian psychologist Dr. Donald O. Hebb found that he could induce a state akin to psychosis in just 48 hours. What had the doctor done—drugs, hypnosis, electroshock? No, none of the above.

For two days, student volunteers at McGill University, where Dr. Hebb was chair of Psychology, simply sat in comfortable cubicles deprived of sensory stimulation by goggles, gloves, and ear muffs. . . .

Dr. Hebb himself reported that after just two to three days of such isolation “the subject’s very identity had begun to disintegrate.” If you compare a drawing of Dr. Hebb’s student volunteers published in “Scientific American” with later photos of Guantanamo detainees, the similarity is, for good reason, striking. 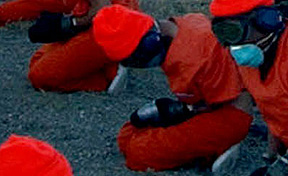 The next thing to note in this photograph is that the detainees are not in simple kneeling positions. If you look closely, you can see that many of the detainees have their ankles crossed behind them, making it impossible to kneel comfortably. McCoy:

During the 1950s as well, two eminent neurologists at Cornell Medical Center working for the CIA found that the KGB’s most devastating torture technique involved, not crude physical beatings, but simply forcing the victim to stand for days at time—while the legs swelled, the skin erupted in suppurating lesions, the kidneys shut down, hallucinations began. Again, it you look at those hundreds of photos from Abu Ghraib you will see repeated use of this method, now called “stress positions.”

By now, you may also be wondering why all of the men have their shirts lifted and their lower backs exposed. Most likely this is for the purposes of sleep deprivation, possibly in combination with sexual humiliation. Break Them Down, PHR’s report on the use of psychological torture by US forces, describes this method of sleep deprivation.

One FBI report recounts an incident at Abu Ghraib in 2003 in which an agent witnessed a hooded detainee draped in a shower curtain and handcuffed to a waist high rail. A military policeman was lightly slapping the detainee on his back, which the agent was told was done because the “detainee was being subjected to sleep deprivation.”

As McCoy explains at length in the article I have been quoting, sensory deprivation and stress positions, which make the victims feel as if they are inflicting their pain on themselves, have been for fifty years the preferred methods of torture by the CIA. These approaches, along with other techniques, like sleep deprivation, meal manipulation, extremes of heat and cold, solitary confinement and sensory overload, are used in concert take total control of the the detainee’s environment and assault his psyche continuously in order to destroy it. The health consequences [PDF] of such treatment are far reaching and profound.

In 2004, the International Committee of the Red Cross was critical not just of specific techniques but of the entire system that the US had put in place at Guantanamo:

The construction of such a system, whose stated purpose is the production of intelligence, cannot be considered other than an intentional system of cruel, unusual and degrading treatment and a form of torture.

I write this for all victims of US torture, but today, in particular, I write this for Jose Padilla. I hope that what I have put forth here makes clear the relationship between this image of Padilla, released in yesterday’s New York Times:

And these descriptions of Padilla:

“It is my opinion that as the result of his experiences during his detention and interrogation, Mr. Padilla does not appreciate the nature and consequences of the proceedings against him, is unable to render assistance to counsel, and has impairments in reasoning as the result of a mental illness, i.e., post-traumatic stress disorder, complicated by the neuropsychiatric effects of prolonged isolation,” Dr. Hegarty said in an affidavit for the defense. . . .

Padilla’s condition is most certainly the consequence of prolonged solitary confinement and other abuses more grave than the goggles and earmuffs, above. Yet, this image shows that the system of torture was constant. In fact, according to the CIA’s infamous 1963 KUBARK Counterintelligence Interrogation manual, that is exactly the point:

The interrogator can benefit from the subject’s anxiety. As the interrogator becomes linked in the subject’s mind with the reward of lessened anxiety, human contact, and meaningful activity, and thus with providing relief for growing discomfort, the questioner assumes a benevolent role.

Psychological torture is constant so that the subject experiences the coercive interrogation as a relief from the status quo—though that “relief” is likely to include further psychological and physical abuse.”

[Cross-posted at Never In Our Names]

UPDATE (12/7): “I’ve written a little more about the image from Camp X-Ray here, at Never In Our Names.”

FURTHER READING
“The Southern District of Florida Blog posts excerpts from Padilla’s December 1 “Reply to the Government’s Response to the Motion to Dismiss for Outrageous Government Conduct.”

The SDFB also posts a link to Cryptome.org, which is hosting all of the documents in Padillia’s filing, including the supporting exhibits (i.e., the rest of the still photos from the video of his trip to the dentist).”

Torture is a crime under US Law. 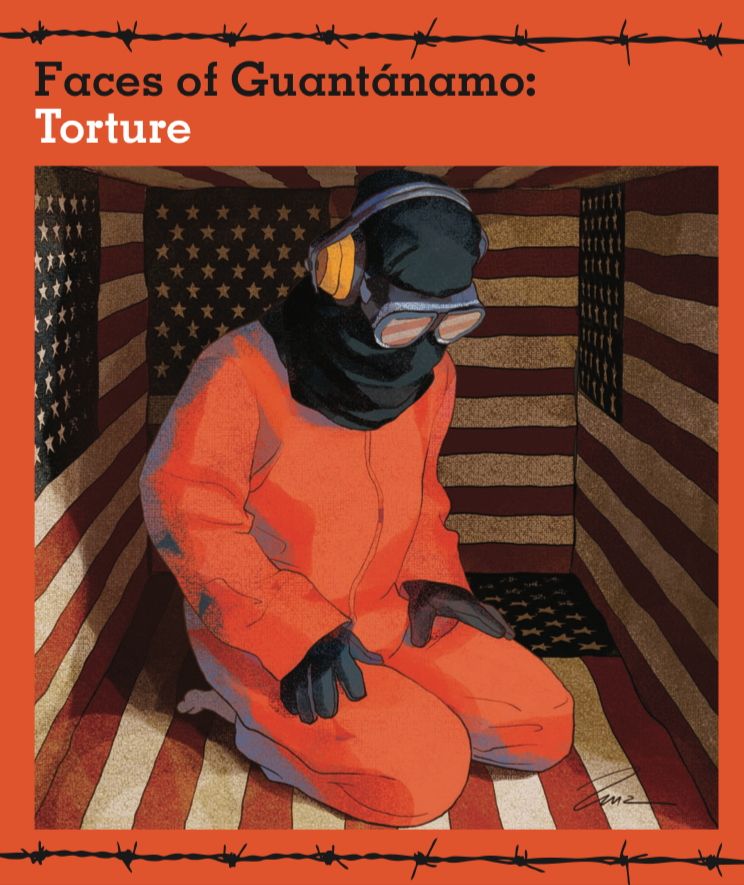 “In this video I start off slow but pick up steam as I submit the evidence and examples. By comparing our situation to the study of torture & coercion on Prisoners of War, I believe it becomes clear that what we are being put through with the virus response is a near perfect parallel to the Amnesty International definition of torture & Bidermans ‘Chart of Coercion.’” Link To Video

Legal definition of the term, “suffocating”

What is the Unauthorized Practice of Medicine? & Law Definition of the Term, “Suffocating”

Is Mr. Biden, your state governor/legislature, employer, church, local business, or school forcing a medical (mask) intervention without credentials or professional license? Even IF they did have a license to practice medicine, INFORMED CONSENT is required for any medical intervention.

*According to the FDA, a mask is a medical device. 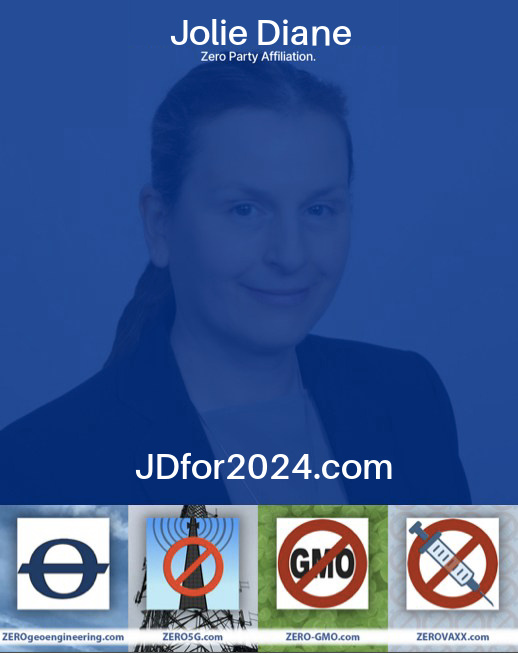 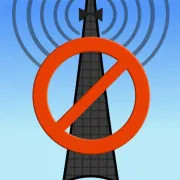 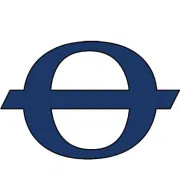 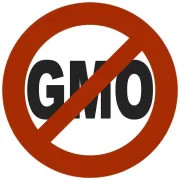 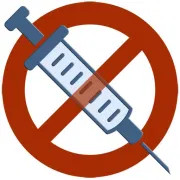