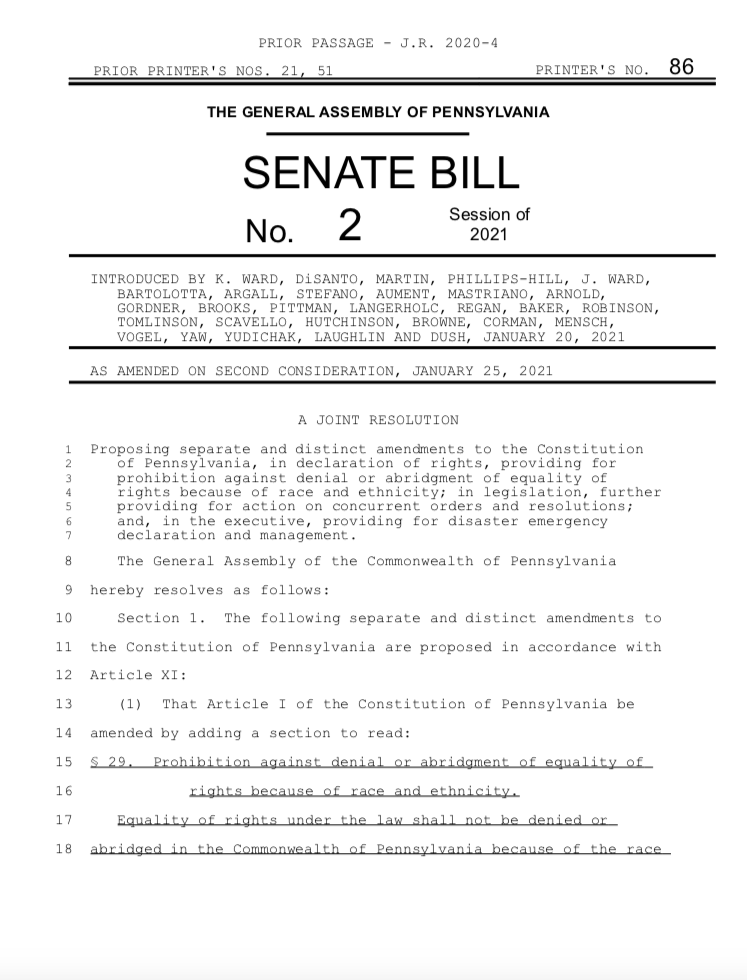 “HARRISBURG – The state Senate today approved a proposed constitutional amendment that would limit the length of future emergency disaster declarations unless an extension is approved by the General Assembly, according to State Senator Doug Mastriano (R-33).

As a result of the vote, the legislative measure moved one step closer to a voter referendum.

“Time and time again over the past year, the General Assembly has offered to work with the Governor in an effort to address the administration’s flawed, inconsistent and – in some cases – unconstitutional edicts,” said Mastriano. “There has been zero legislative input into these policy decisions, because the Governor has shown no regard for checks and balances. The legislation simply re-establishes co-equal branches of government.”

Also, the measure clarifies that the legislature is not required to present the resolution ending the declaration to the governor for consideration.

“Our constituents are demanding transparency and accountability,” said Mastriano. “State code was never intended to provide unilateral power to one branch of government for an indefinite period of time.”

Many of the problems that occurred during the response to COVID-19 were due to the governor’s exercise of unilateral authority. Ongoing problems included issues with long-term care facilities, delayed Unemployment Compensation payments to displaced workers, and a flawed business mitigation program.

Senate Bill 2 provides for a constitutional amendment prohibiting the denial of equal rights based on race or ethnicity, bringing the Pennsylvania Constitution in line with the U.S. Constitution. Now, Senate Bill 2 goes to the House of Representatives for consideration. As a constitutional amendment, the legislation must be approved by the General Assembly in two consecutive legislative sessions before being put on the ballot for voters to decide. The measure was approved by the General Assembly in the previous legislative session.”