Based upon Religious or Conscientiously Held Beliefs

Congratulations to Kentucky Medical Freedom Coalition for their win on securing into law the religious and conscientiously held belief exemption for any vaccine that might be mandated by the state due to an epidemic!  The Governor did not sign the bill, but also did not veto it so it became law on Saturday, March 22nd 2021.  Great work and thank you to everyone who worked to support this legislation!

Here is the bill language that now protects the health freedom right to make your own health care decisions regarding vaccines during an epidemic:
(2)     In the event of an epidemic in a given area, the Cabinet for Health and Family Services may require the immunization of all persons within the area of epidemic, against the disease responsible for such epidemic, except that any administrative regulation promulgated pursuant to KRS Chapter 13A, administrative order issued by the cabinet, or executive order issued pursuant to KRS Chapter 39A requiring such immunization shall not include:

(a) The immunization of any child or adult for whom, in the written opinion of his or her attending health care provider, such testing or immunization would be injurious to his or her health;

(b) The immunization of any child whose parents or guardians are opposed to medical immunization against disease and who object by a written sworn statement to the immunization based on religious grounds or conscientiously held beliefs; or

(c) The immunization of any emancipated minor or adult who is opposed to medical immunization against disease, and who objects by a written sworn statement to the immunization based on religious grounds or conscientiously held beliefs.

(a) Develop and make available on its Web site a standardized form relating to exemptions in this section from the immunization requirements; and

(b) Accept a completed standardized form when submitted.

We are hopeful that other states will follow KY by passing legislation that protects the right of all people to make their own health and medical decisions.” 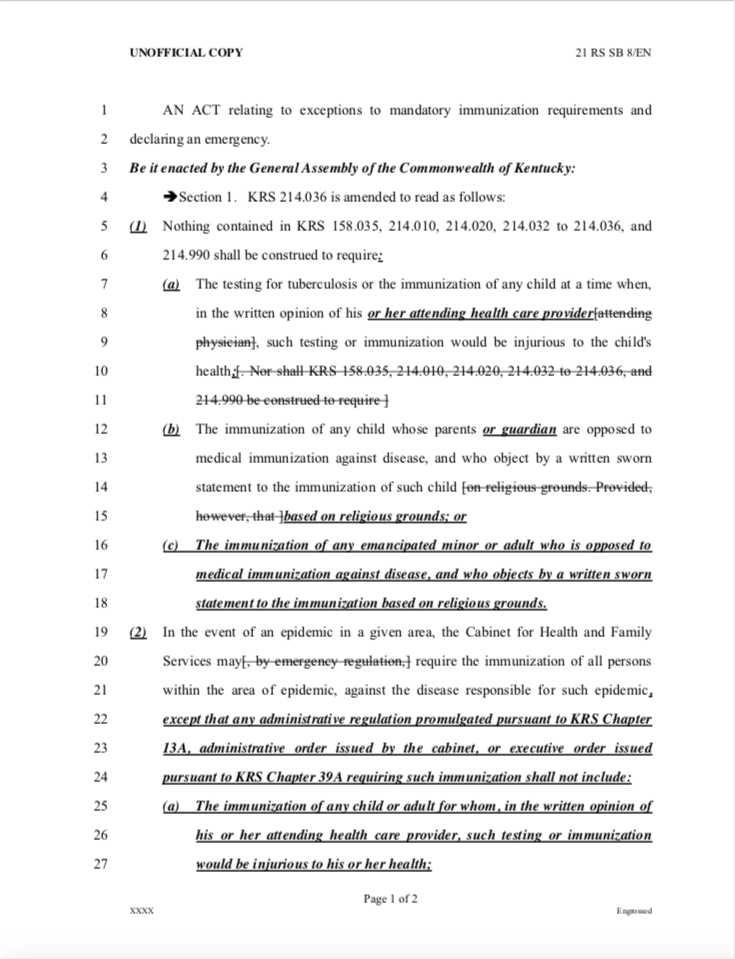