“The U.S. cannot afford this $100 Trillion plan to take over the economy with industry-crushing regulations.

It is urgent you sign your petition demanding your U.S. Senators and Representative oppose this at once! 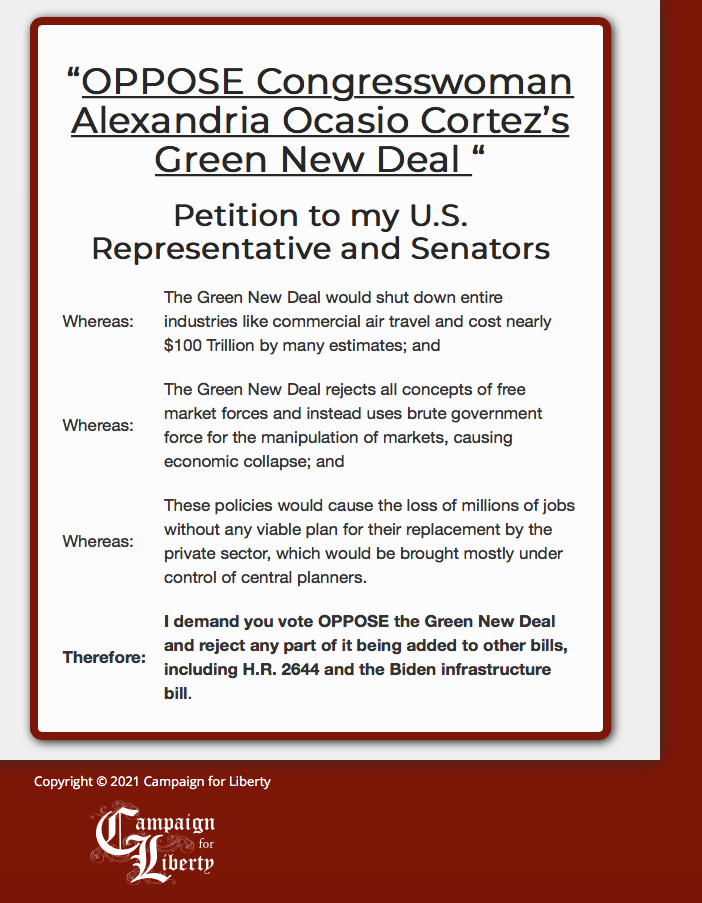 We must oppose this now before a single one of the horrible ideas in this plan finds its way into another bill, including the massive multi-trillion dollar infrastructure bill being pushed by the Biden White House.

Supporters of the Green New Deal claim the science regarding the risk of climate change is “settled.”

However, the science is far from settled. Many of the claims have been debunked.

Some supporters of policies like the Green New Deal have actually supported criminalizing dissent from the so-called “settled” science of climate change.

This reveals the authoritarianism of some people demanding Americans give up real liberty and prosperity because of phantom fears of impending environmental disaster.

Like all forms of socialism, the Green New Deal suffers from what Ludwig von Mises identified as the “calculation problem.” In other words, none of the numbers add up.

The Green New Deal rejects all concepts of free market forces, which are based on efficient use of resources and replaces it with brute government force and manipulation of markets.

When government uses force to remove resources from the marketplace, it makes it impossible for the price system to function, leaving government officials and private citizens unable to determine the most efficient use of resources.

Not only is the Green New Deal a shutdown of entire industries in this country, but it also opens the door for the Federal Reserve to inflate the currency by 100 Trillion dollars! ”

Why the “Green New Deal” Is NOT A Good Deal At All; Biden: “How I learned to love the New World Order”; 2020 U.S. Senate Committee on Appropriations recommends $15,000,000 for cloud-aerosol research