“In 2015, we estimated that over $400 billion dollars had been collected for fiber optic networks that were never deployed. We now know this failure to bring high speed broadband to America was one of the major culprits that caused the Digital Divide.”

“Over the last few years there has been a call to go after “Big Tech” companies, including Google, Amazon, Facebook and Twitter. The “FTC” (“Federal Trade Commission”, as opposed to the “FCC”, the “Federal Communications Commission”) and Attorney General offices around the US are actively going after Facebook, and there are other cases against Amazon and Google, claiming ‘Big Tech’ is harming America due to monopolistic practices. (And this is on top of cases overseas against Amazon, Google and the other online companies.)

While there appear to be legitimate issues about market power in the ‘search’ and ‘online advertising’ markets, all of these services not only require that the user choose to visit these companies’ web presence, but a user must first have an Internet Service Provider (ISP) that connects them to the broadband infrastructure, hopefully using a high-speed broadband connection. And these services are either using a wired connection or going over airwaves with wireless, which almost always ends up on the wired networks.

In the end, the overwhelming majority of connections are now controlled by a cartel, just a few companies dubbed: “Big Telecom” — AT&T, Verizon & CenturyLink, and “Big Cable”, Comcast & Charter. They control most of wires, most of the wireless business, and with the cable companies, they control the high-speed broadband access connectivity service, including the Internet to access websites and the new video streaming services, not to mention phone and bundled Cable TV services in America.

We will address ‘Big Cable’ in an upcoming report.

By the 1970’s, it was clear that the original AT&T had become a very powerful monopoly. It not only controlled the primary state telecommunications public utilities in most states, but it also controlled the long-distance service (calls between states) and it blocked competitors from using these networks. In 1984, 7 “Regional Bell Operating Companies”, “RBOCs”, were formed and each became the caretaker of a collection of these utilities. There were also independents like GTE or SNET (CT), and long-distance companies, including MCI.

The map shows how these Bell companies never left and divided up the country into land-based fiefdoms that do not seriously compete for wired phone and broadband services, even though that was a requirement of most of the mergers that made these three dominant holding companies.

In fact, there were attempts to change this outcome. The Telecom Act of 1996 opened these wires to competition, but with the help of the FCC, the cabal killed off most competition, including 7,000 independent ISPs;

By 2007, Humpty Dumpty had been put back together, as three, very large holding companies with specific geographic coverage. Moreover, they took over the independents; Verizon was the creation of Bell Atlantic adding the independent, GTE; AT&T purchased the independent SNET, claiming they would compete on the East Coast — which did not ever happen. Moreover, they gobbled up the long-distance business. SBC bought AT&T, which had been the largest long-distance company, and took the name AT&T around 2005, and Verizon bought MCI. These mergers effectively killed off the 2 largest competitors. (Ironically, Verizon later sold off a chunk of the GTE holdings to Frontier and its holdings in Maine, New Hampshire and Vermont, while AT&T sold them SNET.)

The Pandemic Woke Up America

Ironically, it took a Pandemic of major proportions, that forced a ‘stay-at-home’ mandate in America, to make the public notice that there were problems with America’s high-speed broadband service geographic coverage, the affordability of this connectivity access and thus their connection to the internet services.

Almost overnight, the terms “Digital Divide”, “Digital Inclusion” and “Digital Inequity” as well as “infrastructure” have filled the media. Congress, the FCC and almost every city, county and state in America is attempting to come to grips with the fact that large areas of rural America, as well as more localized problems in the inner cities, either any connectivity, low connectivity or don’t have high speed broadband available or worse, the services are just not affordable.

Unknown to most, starting in 1991, the “National Infrastructure Initiative”, (also known as the “Information Superhighway”), was announced as part of the Clinton-Gore campaign. The goal was to have America replace the aging copper wires with a fiber optic wire, and the companies went state-to-state to have laws changed, claiming they would build this fabulous fiber optic future if they were granted rate increases and given tax perks.

New Networks Institute, the IRREGULATORS (and before that Teletruth), have been calling for investigations of what is now AT&T, Verizon and CenturyLink (now Lumen) for decades. In fact, we were featured on Bill Moyers on America, Emmy-nominated “The Net at Risk”, on PBS, in 2006, in a segment ironically called “The New Digital Divide” where we warned of this unholy outcome — slow, inferior, high-priced services that are deployed in the wealthier areas, with only 1 or 2 providers (a monopoly or duopoly), if at all.

In 2015, we estimated that over $400 billion dollars had been collected for fiber optic networks that were never deployed. We now know this failure to bring high speed broadband to America was one of the major culprits that caused the Digital Divide.

And in 2021, the issues we laid out have gotten worse. We are at the tipping point of the end game. Politicians and advocates call for throwing hundreds of billions of dollars in government subsidies at the problem. This is a bad idea.

There is no institutional memory and the companies have been able to even rewrite history. Today, almost everyone thinks there are no state telecommunications public utilities in place, that the wires are all unprofitable and that 5G wireless will fix it all. And there is no understanding that America has been giving these companies hundreds of billions of dollars in deregulatory favors, such as increased profits or major tax perks, not to mention the ability for the companies to continuously raise rates for decades with no investigation.

But there is a subplot: Dismantle the state utilities for wireless because it makes more money. The companies have been able to manipulate the FCC’s financial accounting rules that have been used to allocate expenses to the different lines of business so that local service and the utility pay the majority of costs. This has had multiple harms. First, it made the entire US wired infrastructure appear unprofitable. Worse, it is being done to ‘shut off the copper’ and dismantle the state utilities, diverting the construction budgets to fund the wireless deployments and leaving parts of cities and many rural areas as digital deserts, and it allowed for ‘harvesting’ of the local phone customers — raising rates continuously for 15 years. And depending on the state, this could be billions of dollars that should have been used to maintain and upgrade the state utilities to fiber optics.

The true irony is that while many of the advocates and politicians are calling to make the internet and broadband a utility — it already is and they just didn’t notice.” 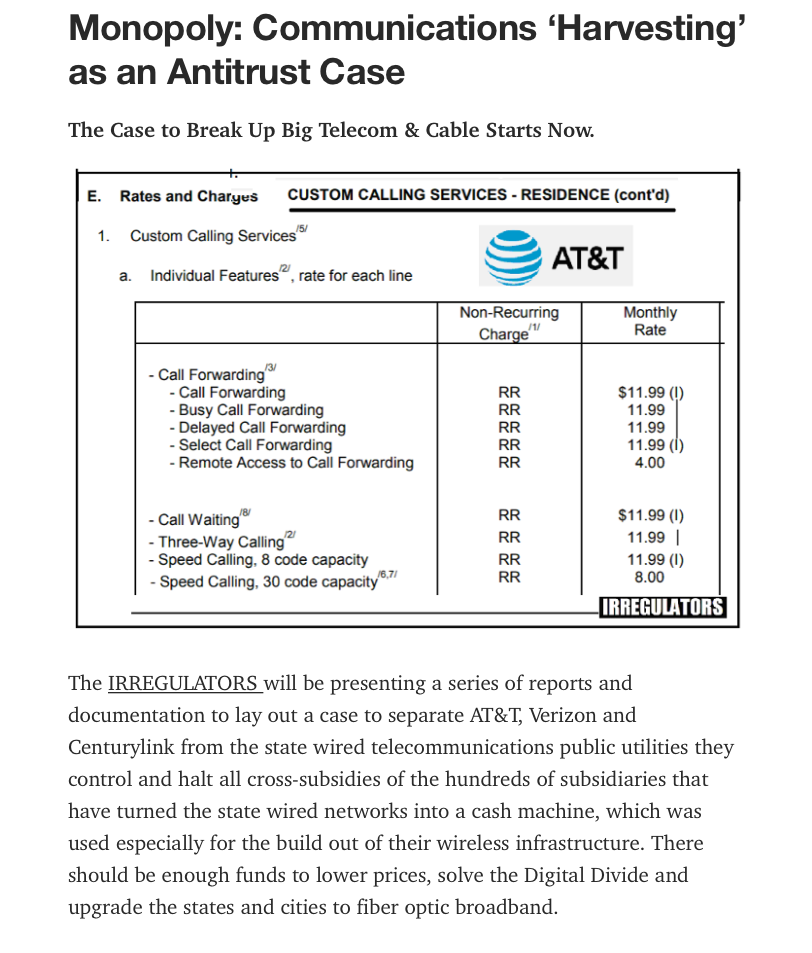 “The IRREGULATORS will be presenting a series of reports and documentation to lay out a case to separate AT&T, Verizon and Centurylink from the state wired telecommunications public utilities they control and halt all cross-subsidies of the hundreds of subsidiaries that have turned the state wired networks into a cash machine, which was used especially for the build out of their wireless infrastructure. There should be enough funds to lower prices, solve the Digital Divide and upgrade the states and cities to fiber optic broadband.”