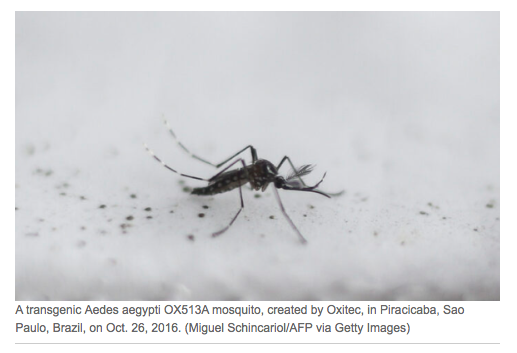 “Genetically modified mosquitoes have been released for the first time in the United States as part of an experiment to combat insect-borne diseases such as Dengue fever, yellow fever, and the Zika virus.

UK-based biotechnology firm Oxitec, which is funded by the Bill and Melinda Gates Foundation, said it released the mosquitoes in six locations in Monroe County’s Florida Keys: two on Cudjoe Key, one on Ramrod Key, and three on Vaca Key.”

Flashback_2010: “The new study relies on a very different mechanism: Use mosquitoes to become what the scientists call “flying vaccinators.” Normally, when mosquitoes bite, they inject a tiny drop of saliva that prevents the host’s blood from clotting. The Japanese group decided to add an antigen-a compound that triggers an immune response-to the mix of proteins in the insect’s saliva.”  LINK