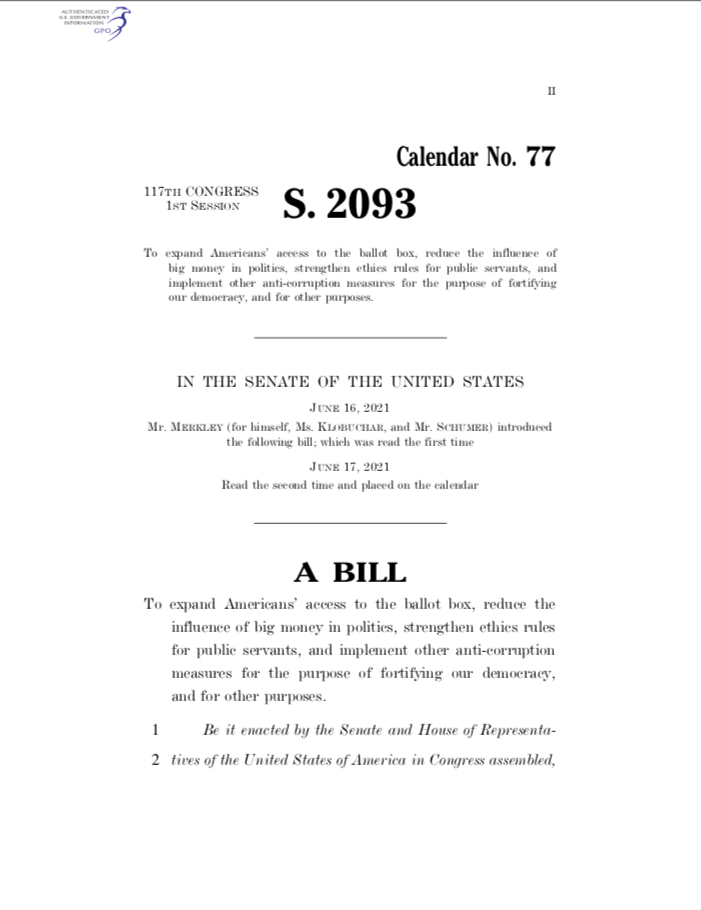 “The Legalized Election Theft bill, S. 1, is now being disguised as a different bill just ahead of a key vote tomorrow, June 22!

Senate Minority Leader Mitch McConnell (R-KY) is saying there’s a paltry 30-35 word difference between S. 1 and the renumbered bill, S. 2093, meaning it’s just as dangerous and must be stopped.

If there is one bill in 2021 that could permanently scar the fabric of the Constitution, it’s this bill (S. 2093), which already passed the House as H.R. 1.

This bill not only institutionalizes many questionable election processes that were fraught with the most controversy in 2020, but it’s also a direct attack on the First Amendment and the right to dissenting political speech.

That’s why I am asking for your urgent action NOW before Majority Leader Chuck Schumer (D-NY) attempts to ram this bill through the Senate, starting with a cloture vote tomorrow!

It’s CRITICAL you call both your U.S. Senators RIGHT NOW and DEMAND they stand against the disguised Legalized Election Theft bill, S. 2093.

S. 2093 gives the political class a permanent and seemingly insurmountable advantage to keep and maintain power by tilting elections in their favor, by:

>>Making it illegal to clean out voter rolls of deceased or non-residents;

>>Forcing states to allow vote-by-mail, which is fraught with opportunities to commit fraud;

>>Forcing taxpayers to subsidize candidates they don’t align with politically; and

As unimaginable as this all sounds, we are getting much closer to this becoming a reality!

As Chairman of Campaign for Liberty, I wrote a letter to the members of the Senate Rules Committee describing specific examples of how this bill would silence political speech with fear and intimidation of activist groups just like ours.

In short, S. 2093 would allow for the permanent manipulation of elections by nationalizing them, and I’m not sure we’ll ever be able to undo the damages if the worst-case scenario happens.

The so-called “For the People Act,” now renumbered as S. 2093, empowers federal regulators to categorize and regulate speech, including online.

That means Campaign for Liberty could be in legal jeopardy for running our critical candidate survey program so you will know where candidates stand on issues important to you. . .

Not only that, but merely telling you how your legislators voted on legislation could become a CRIME!

Both sides of the aisle should be against this bill, simply based on its flagrant disregard of the First Amendment.

That’s why it’s CRITICAL you call your U.S. Senators RIGHT NOW and DEMAND they stand against the Legalized Election Theft bill, S. 2093.

Our elections were never meant to be “nationalized” in this way. The U.S. Constitution clearly states that elections are to be held and electors for the presidential election chosen by the manner in which the state legislature prescribes.

S. 2093 would completely turn this on its head and force states to adopt rules for their elections that many of them do not want or are in the process of remedying because of flaws they have discovered.

S. 2093 would thwart those efforts by the states and even counties to rectify issues they may have discovered or will discover as the full forensic audit of the election in Arizona’s largest county wraps up and other states begin to do the same thing.

Considering the sidestepping of the Constitution on locally controlled elections and the attack on political speech, this bill should be opposed by all sides.

The radical left, led by Chuck Schumer, have even attempted to eliminate the Senate Filibuster rule, just to get The Legalized Election Theft Bill passed.

They will pull out all the stops, so you and I must hold the line!

Majority Leader Schumer is showing he is desperate to get this bill passed and put on President Biden’s desk, where he will certainly sign it.

He couldn’t get it through as S. 1, so it’s been renumbered and remains virtually unchanged, hoping that you won’t notice as it’s rammed through.

I am urging all members of the Senate to oppose this reckless bill, and I appreciate your immediate action to fight it off again.