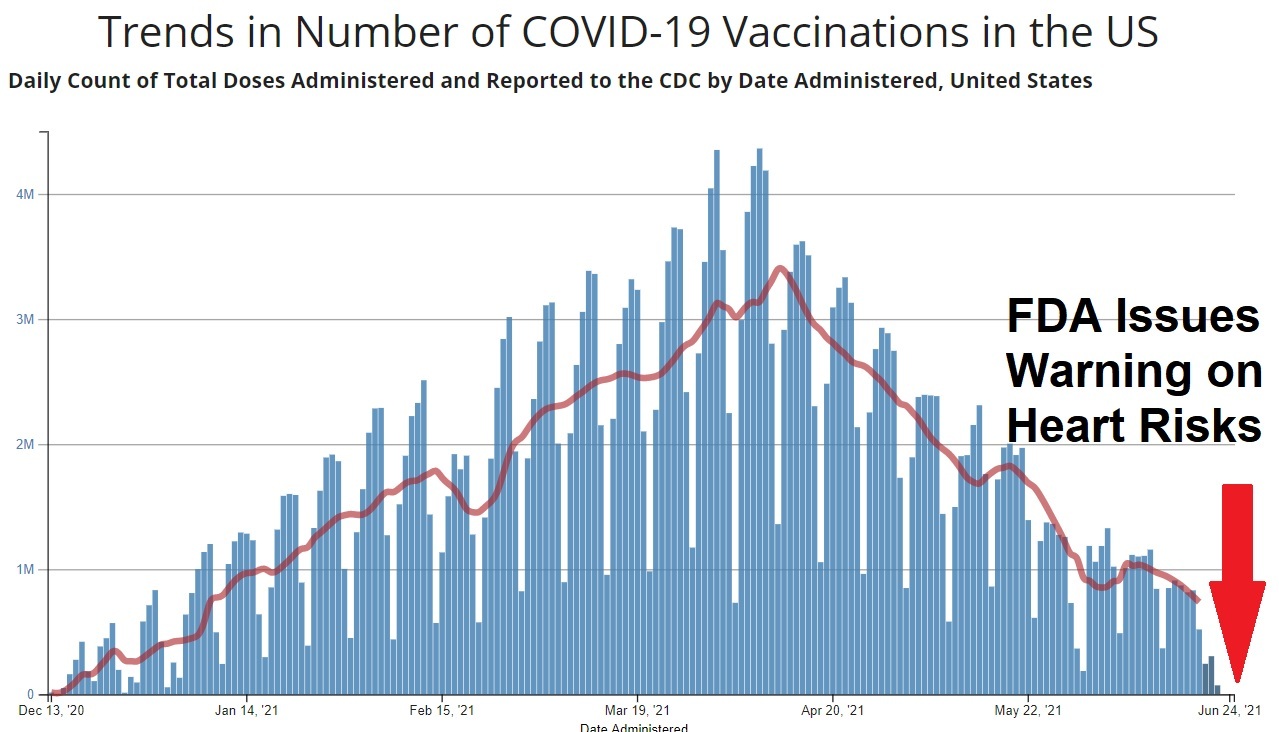 “After injecting Americans with over 300 million doses of one of the mRNA COVID-19 bioweapon shots since December 13, 2020, the FDA has finally agreed to force Moderna and Pfizer to put warning labels on their shots over a “likely association” between the injections and heart problems, which they claim is “rare.”

The warning comes as the vast majority of Americans who wanted one of the mRNA injections have already been injected, as demand for the shots has decreased to levels seen back in December, just after the shots were given emergency use authorization and were beginning to be rolled out.

As we have been reporting throughout the rollout of these non-FDA approved injections, hundreds of cases of people suffering heart problems, including DEATH, have been reported to VAERS, the Government database that tracts adverse reactions to “vaccines.”

Numerous COVID-19 vaccines have faced development delays and safety and supply issues, but the mRNA vaccines from Pfizer-BioNTech and Moderna have enjoyed a relatively unfettered ride to the top of the class.

Now, Wednesday’s news that U.S. experts concluded there is a “likely association” between rare cases of heart inflammation and mRNA vaccines has finally presented the Pfizer-BioNTech and Moderna shots with a dose of adversity. The FDA said it will move quickly to require the companies to add a label warning that young adults and adolescents are susceptible to the side effect.

While the Centers for Disease Control and Prevention (CDC) concluded that the benefits of the vaccine clearly outweigh risks, the verdict could compel those with apprehension to favor adenovirus-type vaccines offered by Johnson & Johnson and AstraZeneca.

Those shots faced safety concerns of their own earlier this year over rare but severe cases of blood clots, which led to fatalities. After an investigation, J&J’s vaccine now carries a warning in the U.S.

As usual, the CDC cherry-picked their data to only include a specific age group that eliminated cases in those over 39, and only for “myocarditis,” so that they could control the numbers to make it look “rare.”

Using the CDC’s own statistics in the VAERS database, which now lists nearly 6000 deaths following COVID shots, we searched for adverse events where the symptoms were related to heart problems, and found 172 cases, with over 37% of those under the age of 44. (Source.) (UPDATE 6/25/21: The VAERS database was updated today, so these numbers are slightly higher now.)

Using the same search parameters for deaths, we found 39 deaths, including one under the age of 44. (Source.)

If we expand the search to include anytime the write-up on an adverse reaction included the word “heart,” we net a result of 1,608 cases (source), and using the same search parameters we net 50 cases where the patient died following a COVID-19 injection. (Source.)

I hesitate to even use the CDC’s numbers for COVID-19 adverse reactions these days, as it has been shown that they are holding back much of the data and even changing and replacing records. CDC whistleblowers are allegedly claiming that the total deaths reported to the CDC following COVID-19 injections are closer to 50,000 now. (Source.)

This would certainly not be the first time the FDA acted in the interest of Big Pharma, and specifically Pfizer, disregarding patient safety until after the company could reap its full profits before issuing warnings about the side effects of their products.

Prior to the blockbuster COVID-19 injection products, Pfizer’s cholesterol-lowering drug Lipitor had been the best-selling drug of all time.

Lipitor benefited from the change in marketing laws in 1997 that allowed pharmaceutical companies in the U.S. to advertise their products directly to consumers. Pfizer convinced an entire generation of Americans that they needed a pill to lower their cholesterol in order to prevent heart disease, in what will go down as one of the most brilliant and unethical marketing schemes of all time (at least until the Great Plandemic of 2020).

While the side effects were a serious concern, there are also concerns that statin drugs have no therapeutic value either. Studies have never conclusively proven that lowering one’s cholesterol levels by medication increases one’s life span.

In fact, there is evidence to the contrary, that higher cholesterol levels are associated with longer life spans. (See: Statin Scam: People with Higher Cholesterol Live Longer than People with Low Cholesterol.)

Another study published in 2015 actually showed that statin drugs caused an increase of coronary calcium levels, which can lead to an increase in heart disease, the very thing statin drugs are supposed to be preventing! (See: Study: Cholesterol-lowering Statin Drugs Worsen Coronary Calcium Tests.)

After Pfizer’s patent on Lipitor expired at the end of 2011, after racking up sales of over $140 billion, the FDA issued its first warnings against statin drugs, which included: liver injury, memory loss, diabetes, and muscle damage. Soon after issuing these warnings, the lawsuits started pouring in.

But there will be no lawsuits for injuries and deaths related to heart problems from Pfizer’s mRNA shots, because it is not even approved by the FDA yet, and under the provisions of a “pandemic” health crisis and its emergency use authorization, one cannot sue Pfizer or Moderna or J&J over deaths and injuries caused by these bioweapon shots.”