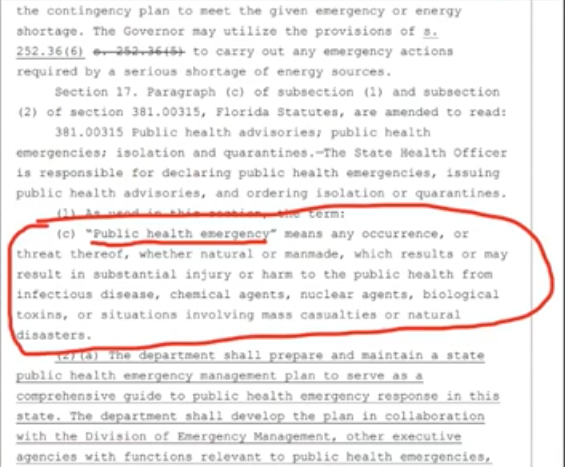 “Governors of the two largest Republican states in the U.S. have recently taken political action to restrict or prohibit “vaccine passports” as a means of discriminating against private citizens who choose not get one of the COVID-19 bioweapon shots.

Does this mean that Greg Abbott and Ron DeSantis are against the bioweapon shots that have killed tens of thousands of people, and are now being injected into children?

Hardly. In fact, both these two governors, and ALL governors in the United States right now, regardless of political affiliation, are accomplices to mass murder!

Unless I missed some news somewhere, once the FDA and CDC allowed emergency use authorization to start injecting these bioweapon COVID-19 shots into children, NONE of the U.S. Governors took action in their state to stop the mass injections of children with these bioweapon shots, even though they have the authority to do so.

There are reports now circulating in the alternative media from those who have actually read the bill, and what they have discovered is that while the bill prohibits discrimination based on COVID-19 “vaccination” status, it allows law enforcement to forcibly vaccinate its citizens, as well as lock them away in quarantine at the direction of “State Health Officers.”

An overlooked section of Florida Senate Bill 2006, put into law by the state legislature and Governor Ron DeSantis on May 3, 2021, allows government officials to forcibly vaccinate citizens.

Ironically, the bill was widely supported as it was allegedly intended to ban vaccine passports in Florida.

“In Florida, your personal choice regarding vaccinations will be protected and no business or government entity will be able to deny you services based on your decision,” DeSantis told Floridians.

While the legislature does prohibit private businesses and government entities from asking for proof of a COVID vaccination, it also allows the state to vaccinate citizens “by any means necessary”.

Under Section 315 of Chapter 381 of Florida’s ‘Public Health’ statute, Title XXIX, individuals can be subjected to quarantine or isolation if they refuse to be examined, tested, vaccinated or treated during a public health emergency such as COVID-19.

“Examination, testing, vaccination, or treatment may be performed by any qualified person authorized by the State Health Officer,” the bill explains.

The legislature says any order given to police by the State Health Officer that helps force-vaccinate a person is immediately enforceable.

In addition, volunteers who help the state vaccinate or quarantine people will be provided with lodging, transportation, state liability protection and workers’ compensation. (Full article.)

A Bitchute channel called HighImpactFlix has also reported on this:

However, one key provision of the bill was removed and did not make it to the House Floor for a vote: a prohibition on COVID-19 vaccine employer mandates.”

Majority of Physicians Decline COVID Shots, according to Survey_ Association of American Physicians and Surgeons_Link

“Of the 700 physicians responding to an internet survey by the Association of American Physicians and Surgeons (AAPS), nearly 60 percent said they were not “fully vaccinated” against COVID.

This contrasts with the claim by the American Medical Association that 96 percent of practicing physicians are fully vaccinated. This was based on 300 respondents.

Neither survey represents a random sample of all American physicians, but the AAPS survey shows that physician support for the mass injection campaign is far from unanimous.”

Link To Article _Majority of Physicians Decline COVID Shots, according to Survey_ Association of American Physicians and Surgeons