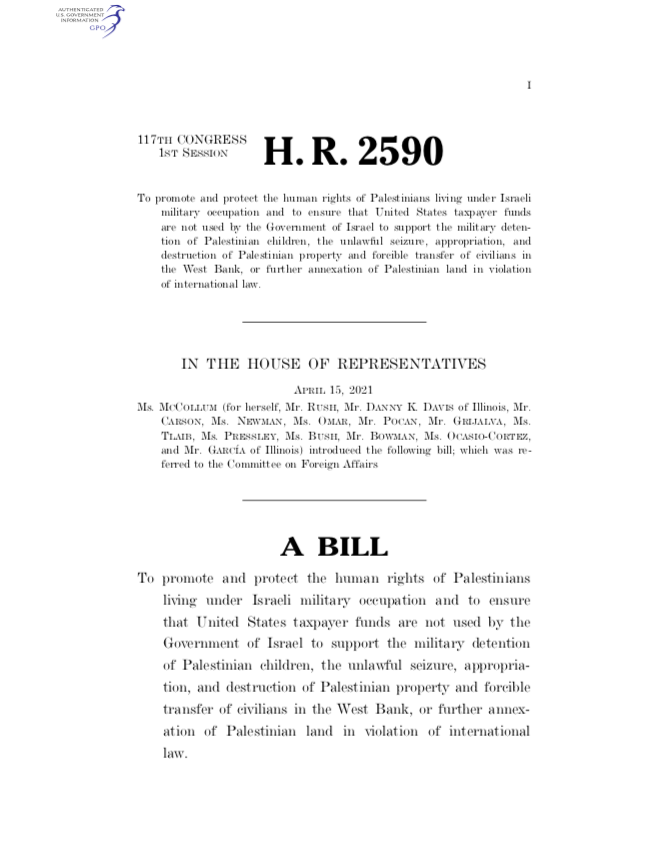 “A BILL To promote and protect the human rights of Palestinians living under Israeli military occupation and to ensure that United States taxpayer funds are not used by the Government of Israel to support the military detention of Palestinian children, the unlawful seizure, appropriation, and destruction of Palestinian property and forcible transfer of civilians in the West Bank, or further annexation of Palestinian land in violation of international law.”

“(30)Israel is the largest cumulative recipient of United States foreign assistance since World War II, receiving from the United States $146,000,000,000 (current, or noninflation-adjusted, dollars) in bilateral assistance and military funding.

(34) The sale and export of United States-origin defense articles and defense services to foreign countries are governed by an extensive set of laws, regulations, policies, and procedures, including authorizations and reporting requirements in both the National Defense Authorization Acts and in the State Department, Foreign Operations, and Related Programs Appropriations Acts.

(36) The Arms Export Control Act of 1976 (22 U.S.C. 271, et seq.) generally prohibits foreign countries from using funds made available under the Act for procurement outside the United States. However,

each year since 1991, varying amounts of FMF grants have been designated for offshore procurements in Israel.”  P. 11-13

“More than 400 Jewish and Israel studies academics have signed a statement denouncing potential Israeli annexation of parts of the West Bank as “apartheid” and say it would be a “crime against humanity” according to international statutes.

“Representing a spectrum of viewpoints, we write in opposition to the continuation of the occupation and the stated intention of the current elected government in Israel to annex parts of the West Bank, thereby formally (de jure) creating apartheid conditions in Israel and Palestine,” the statement reads.

It continues, “Under these conditions, annexation of Palestinian territories will cement into place an anti-democratic system of separate and unequal law and systemic discrimination against the Palestinian population.”    Link To Full Article_The Jerusalem Post

“This collaboration shows you Gaza’s protest movement like you’ve never seen before. Filmed during the height of the Great March Of Return protests, it features exclusive footage of demonstrations where 200 unarmed civilians have been killed by Israeli snipers since March 30, 2018.”

Link To _Gaza Fights For Freedom.com