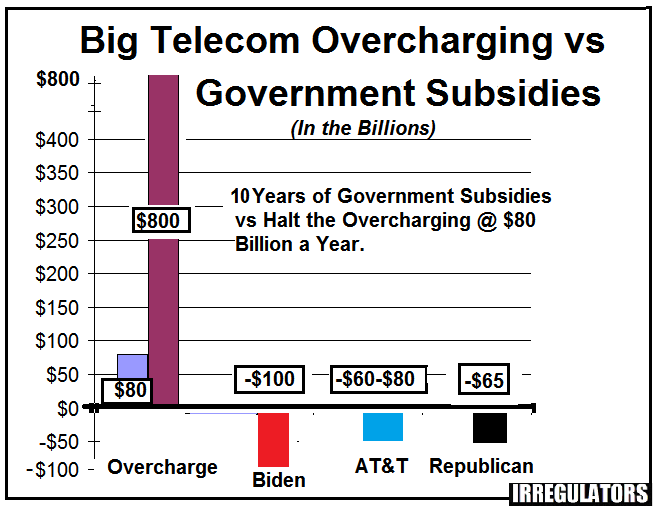 AT&T CEO: Government Should Pay $60–80 Billion for Broadband;IRREGULATORS: Government Must Halt the $80 Billion a Year in Overcharging by AT&T-Big Telecom.

Audit the books, stop the overcharging and fix the Digital Divide without government subsidies.

“According to Broadband Breakfast, June 10, 2021, AT&T wants government handouts for broadband in territories it failed to upgrade.

Over the last year, with everyone forced to stay at home, the pandemic has brought into harsh focus that America was never properly upgraded with high-speed broadband, especially in rural and low income areas, and that prices are out of control, making it hard, if not impossible for low income families to get broadband at ‘reasonable rates’.

And the government has already started to throw money at this. We’ve written a series of articles about the Emergency Broadband Benefit,(“EBB”), a $3.2 billion dollar fund where low income families can get up to $50 a month discount on the broadband internet service, (tribal households can get more money).

While helpful, AT&T et al. are getting reimbursed for this $50 and worse, the companies can charge made-up fees, as well as for an internet modem, inflating the costs to customers as none of these added charges are part of the advertised price or even mandated by the government.

But in AT&T’s case — and hidden in plain sight, the entities offering these services are the state-based public telecommunications utilities; AT&T controls 21 states’ primary infrastructure, such as AT&T California or AT&T Michigan, but AT&T never mentions that there are state-based public telecom utilities in America or that AT&T controls the majority of the US (by population) or that AT&T let most of the rural areas deteriorate over the last 30 years.

IMPORTANT: These are NOT just the copper based phone lines, but also DSL and U-Verse and even the fiber optic connections to the node, including the fiber optic wires to the wireless cell sites.

This, then, is the partial 4th article in the EBB, Emergency Broadband Bamboozle series.

But, $3.2 billion is just chump change compared to the national planned give-aways being discussed. As the opening chart shows:

§ President Biden announced a Democrat offering; a $100 billion dollar government subsidized plan which is supposed to be spent to have 100% of America with broadband by 2030. This plan has been focused more on giving the money to the municipalities and not AT&T and the incumbent phone and cable companies.

§ NOTE: Since the announcement the total has been reduced to $65 billion.

§ The Republicans want $65 billion but they want these taxpayer dollars to be given to AT&T, the other Big Telecom companies and Big Cable.

Moreover, the Democratic plan is being trashed by Big Telecom and Cable.

USA Today (via Reuters) quotes the cable association, NCTA and the USTelecom, the association for the wired companies like AT&T, both slamming the plans for municipality build outs.

“The cable lobbying group NCTA said the White House ‘risks taking a serious wrong turn … by suggesting that the government is better suited than private-sector technologists to build and operate the internet.’ The NCTA also said it was worried about price regulation. The Biden document does not mention price controls.”

“Jonathan Spalter, CEO of the lobbying group USTelecom, said that prioritizing investments in government-owned broadband is ‘exactly the wrong approach’ since taxpayers will get the bill if such networks fail. He also claimed that broadband prices are already falling”.

The IRREGULATORS Position: Halt the Subsidies; Get the Money Back to Fix the Digital Divide.

How much money have you, your family, friends, business, the city you live in, your neighbors, the State and even America been overcharged by Big Telecom & Big Cable over the last 3 decades?

The answer begs the question: Why is America giving AT&T et al. government subsidies to ‘fix’ the Digital Divide when these companies were responsible for creating it? As the data indicates, these few companies took actions over the last 3 decades to create the Digital Divide, not to mention leading the fight to disregard Net Neutrality, and a host of other issues that harmed our Digital Future.

The overcharging continues and has increased over the last few decades, with an estimated overcharging now at $60-$80+ billion annually. And depending on which services are being used, who is the telco or cable company, the state, and the state and federal laws that helped to overcharge you, overall, each household is paying about $450-$625 a year, extra. But, since 1991, over time, the average household was overcharged $8,000 to $10,000, though there are many caveats and details (and these are the low numbers).”

Link To_“The Book of Broken Promises” — The history of broadband: fiber optic deployments in America that customers paid for, but that weren’t delivered.