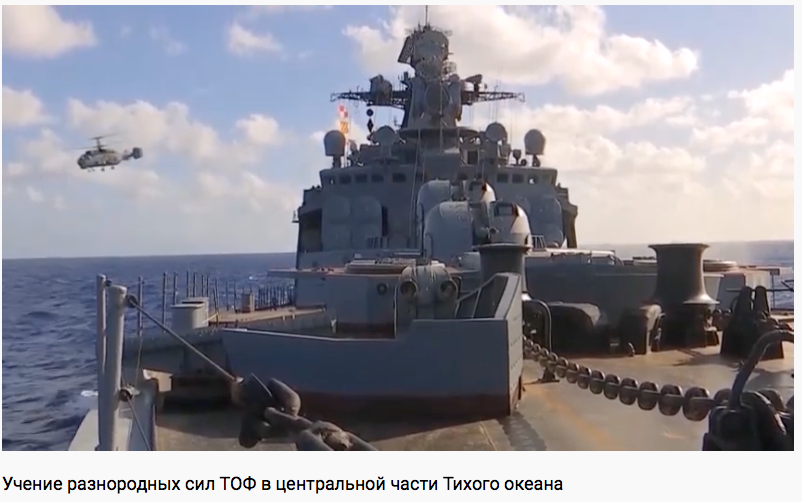 “For weeks Russia has mustered a large fleet and aerial assets in the Pacific Ocean near Hawaii in what’s been widely recognized as Russia’s largest Pacific military drills since the end of the Cold War. The Pentagon has closely monitored the somewhat unprecedented exercises which have seen at least 20 warships, submarines, fighter jets, and long-range bombers operating a mere 300 miles off Hawaii’s coast.

But in a new alarming statement the US Navy is confirming that at one point Russian vessels and aircraft came a mere 35 miles off Hawaii’s coast as the massive war games were underway. While stressing that the foreign military assets stayed within international waters, spokesman for US Indo-Pacific Command Navy Capt. Mike Kafka, said, “At the closest point, some ships operated approximately 20 to 30 nautical miles (23 to 34 statute miles) off the coast of Hawaii,” he said. “We closely tracked all vessels.”

New details of Russian maneuvers during the course of the exercises suggest there were multiple “close calls” – also as days ago the Pentagon scrambled F-22 stealth fighters, which remain on standby.

The Russian side is now divulging that its military undertook mock attacks on a simulated aircraft carrier strike group.

First, as the Honolulu Star Advertiser has detailed, armed US fighters twice responded to the area amid a heightened state of alert over the Russian war games:

The deployment of Russian “Bear” bombers as part of the exercise twice resulted in missile-armed Hawaii Air National Guard F-22 fighters scrambling to possibly intercept the turboprop planes — which headed in the direction of Hawaii but never came close, officials said.

The report continues: “The Hawaii Air Guard stealth jets launched June 13 and again on Friday, but no intercepts were conducted with the Russian planes likely turning away from the path toward the state, according to an account of the launch.”

The Russian Ministry of Defense today published an account about the Pacific Fleet maneuvers, which are described as having practiced “the tasks of destroying an aircraft carrier strike group of a mock enemy.”

A simulated cruise missile strike was carried out by the Pacific Fleet flagship, the Slava class cruiser Varyag (pictured above), as well as the Udaloy class destroyer Marshal Shaposhnikov, and the Steregushchiy class corvettes Hero of the Russian Federation Aldar Tsydenzhapov, Gromky, and Sovershenniy.

Again, since the formal end of the exercises it’s emerging based on independent satellite image analysis that some of the Russian military assets were engaged in operations much closer to the United States’ sovereign territory than previously thought.

“Russia says that they are 300 miles off the coast of Hawaii, yet unconfirmed satellite images from June 19 appear to show them much closer – within 35 miles of the U.S. state,” The Daily Mailobserves. The newest US Pacific-Command statement has since confirmed this proximity of at least some of the Russian assets.

A number of Western pundits underscored that the large-scale Russian games were meant as a serious muscle-flexing “message” to President Biden just as he met with Vladimir Putin in Geneva last Wednesday.

Despite the US fighters being scrambled off Hawaii’s coast and remaining on stanby, Biden never publicly addressed the threat, though it’s unknown if he broached the issue with Putin directly in the closed-door talks.”

The annual U.S.-led multinational naval exercise in the Black Sea, Sea Breeze, will begin on June 28 and continue until July 10. As with previous iterations this year’s exercise will be co-hosted by the U.S. and Ukraine.

Though as the name indicates primarily a series of maritime drills, Sea Breeze also includes air and land components.

Currently there are three warships from NATO nations in the Black Sea: the U.S. interceptor missile/guided-missile destroyer USS Laboon, the British destroyer HMS Defender and Dutch frigate HNLMS Evertsen. The first is part of the carrier strike group attached to the USS Dwight D. Eisenhower aircraft carrier and the latter two to the new HMS Queen Elizabeth carrier.

As the massive Defender Europe 21 war games wrapped up this week, several components of which were held in the Black Sea, the public relations bureau of U.S. Naval Forces Europe-Africa and U.S. Sixth Fleet announced that this year’s Sea Breeze will include military personnel, ships, planes and equipment from the most nations ever: 32. From six continents. Participating countries are: Albania, Australia, Brazil, Britain, Bulgaria, Canada, Denmark, Egypt, Estonia, France, Georgia, Greece, Israel, Italy, Japan, Latvia, Lithuania, Moldova, Morocco, Norway, Pakistan, Poland, Romania, Senegal, Spain, South Korea, Sweden, Tunisia, Turkey, Ukraine, the United Arab Emirates and the U.S. All are NATO members or partners except for Brazil and Senegal, but Brazil has been contributing to war games held by the U.S. in Africa and Europe lately and may well soon join its neighbor Colombia as a NATO partner; and Senegal, which is also now participating in the U.S./NATO African Lion military exercise, may join fellow African NATO partners Algeria, Egypt, Mauritania, Morocco and Tunisia.

“U.S. leaders continually assess the progress of the retrograde from Afghanistan and the state of operations in the country and adjust accordingly, Pentagon Press Secretary John F. Kirby said Monday.”