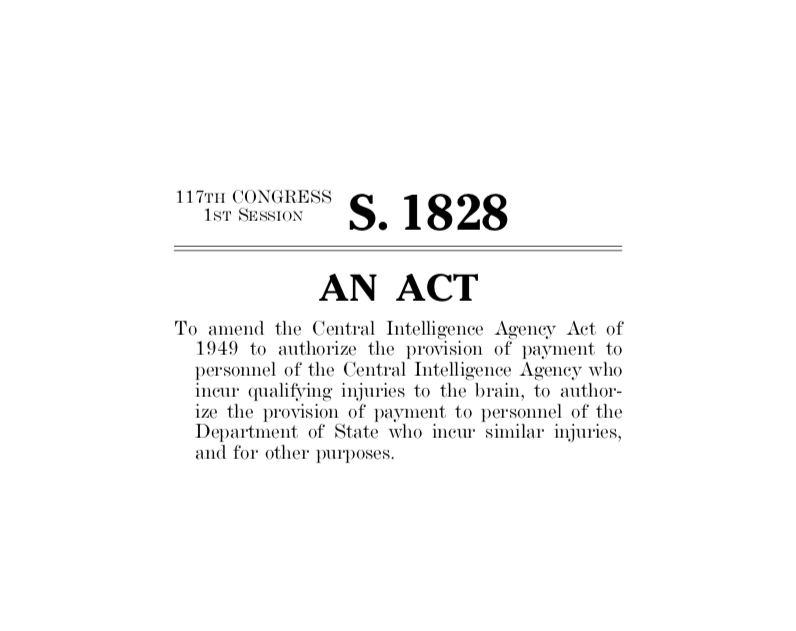 ALL The People Need Protection from Microwave Radiation Exposure!

“In a reversal of the established commentary that those claiming victimization by electronic weaponry are crazy and delusional, the US Senate has passed a Bill authorizing payment to CIA and State Department officials who have been attacked by this weaponry. Recent news reports have detailed these attacks on US diplomats in Cuba and China.

Dubbed “The Havana Syndrome,” it was recently reported that CIA personnel have also suffered such attacks in Europe and Asia.

Senate Bill 1828, the “Helping American Victims Afflicted by Neurological Attacks Act of 2021, or the HAVANA Act of 2021,” authorizes payment to qualified employees for brain injuries inflicted by neuroweaponry.

In a letter to the Bill’s sponsors, Senators Susan Collins and Jeanne Shaheen, former NSA analyst Karen Melton-Stewart asked the following question: “Did you know that you are actually accidentally excluding a large and significant body of victims… who need help NOW?”

In the letter, dated June 2 and also sent to Marco Rubio, Mark Warner and others, Stewart asks the Senators to “Please write an all-encompassing piece of legislation to stop this horror of the exploitation of innocent people with Microwave Weapons (and other DEW Directed Energy) attacks…” Referring to the placement of many such individuals on the Terrorist Watchlist, Stewart goes on to state that “Innocent people are thrown onto the watchlist, based on little to nothing, with no notification or warning…using this new secret underclass of “untouchables” as nonconsenting test subjects for Military Industrial Complex weaponry such as Directed Energy Weapons like microwave, millimeter waves, lily waves,weaponized WiFi…as well as war-grade gases, poisons…”

According to Stewart, she received a response from her Maryland Senator’s office, which stated that questions were being tendered to President Biden about this issue, and urged her to keep sending information. Stewart stated that no response was received from Senators Collins, Shaheen, Rubio or Warner.”

Link To Article_The CIA Has Never Worked For The American People

All the People Need Protection from Microwave Radiation Exposure!

Wireless infrastructures are subjecting all living beings to involuntary exposure to microwave radiation and unwarranted surveillance 24/7/365.

Link To My Street My Choice