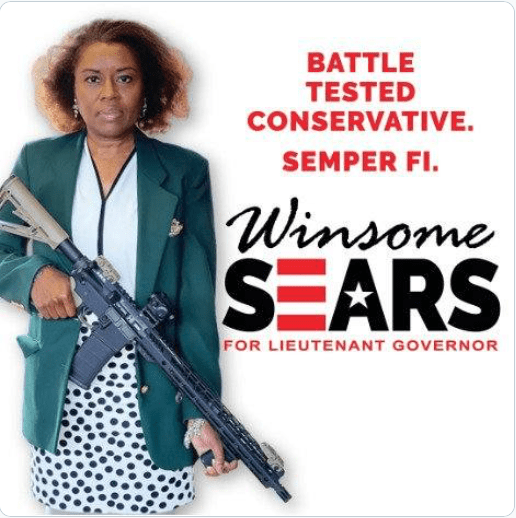 “Winsome Sears isn’t who Democrats wanted to face in the race for Virginia lieutenant governor.

For one, it’s a nationally important race.  Virginia is one of only two states to hold its statewide elections in off-years, making it a bellwether for the 2022 midterms. And with Virginia’s unique rule prohibiting the governor from running for consecutive terms, whoever becomes lieutenant governor is often promoted to governor in four years.

Then there’s just who Winsome Sears is.

In her official campaign photo, she’s holding an AR-15.

And she’s the first black Republican woman ever elected to the Virginia House of Delegates, the oldest legislative body in the Western Hemisphere.

Sears, a Marine veteran, pushed back against teaching children to see White people and their families as “racist.”

“It’s going to be detrimental to our schools and not what we want. It supposedly is to help someone who looks like me and I’m sick of it, I’m sick of being used by the Democrats and so are many people who look like me,” she added.

Former state delegate and Jamaica native Sears, 57, is the first Black Republican woman from her district to run for lieutenant governor. Her district is 60 percent Black.”