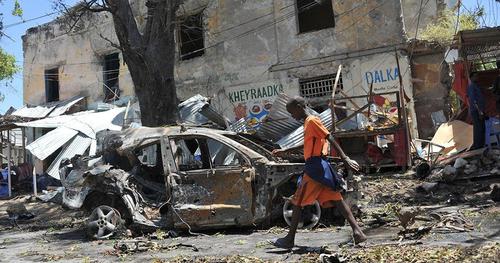 “Every gun that is made, every warship launched, every rocket fired signifies, in the final sense, a theft from those who hunger and are not fed, those who are cold and are not clothed. This world in arms is not spending money alone.”

“The Pentagon has confirmed that President Joe Biden has carried out his first military strikes on the African continent, on Tuesday launching strikes on Somalia targeting al-Qaeda linked al Shabaab militants. “The Department of Defense can confirm that in coordination with the Federal Government of Somalia, US Africa Command forces conducted one airstrike against al-Shabaab in the vicinity of Galkayo, Somalia, today,” the Pentagon said.

Pentagon spokeswoman Cindi King indicated the operation took place “in the vicinity of Galkayo, Somalia,” which is a city in the country’s center, according to The Hill. “A battle-damage assessment is still pending due to the ongoing engagement between al-Shabaab and Somali forces,” she said Tuesday.

The Somali government has long been battling the Islamist insurgent group, which has in the past been responsible for hundreds of kidnappings as well as sporadic terror attacks on civilian areas of the war-torn country. The US military said it worked in coordination with the Somali government for Tuesday’s operation.

It marks the third publicly confirmed Biden-ordered air strikes of his presidency, with the prior two launched in Eastern Syria along the Iraq border ostensibly against “Iran-backed militia” engaged in tit-for-tat attacks on American bases.

According to The Hill, the last time US forces hit Somalia was on Jan. 19 – just before Biden was sworn into office – and after Trump had loosened the rules of engagement for drone strikes.

Current US rules of engagement based on the stated policies of the Biden administration say that any planned airstrikes conducted outside Afghanistan, Syria, and Iraq have to be formally submitted to the White House to “ensure that the president has full visibility on proposed significant actions.” This means it’s most likely Biden personally signed off of the strikes.”

Americans Do Not Support Biden’s Wars!