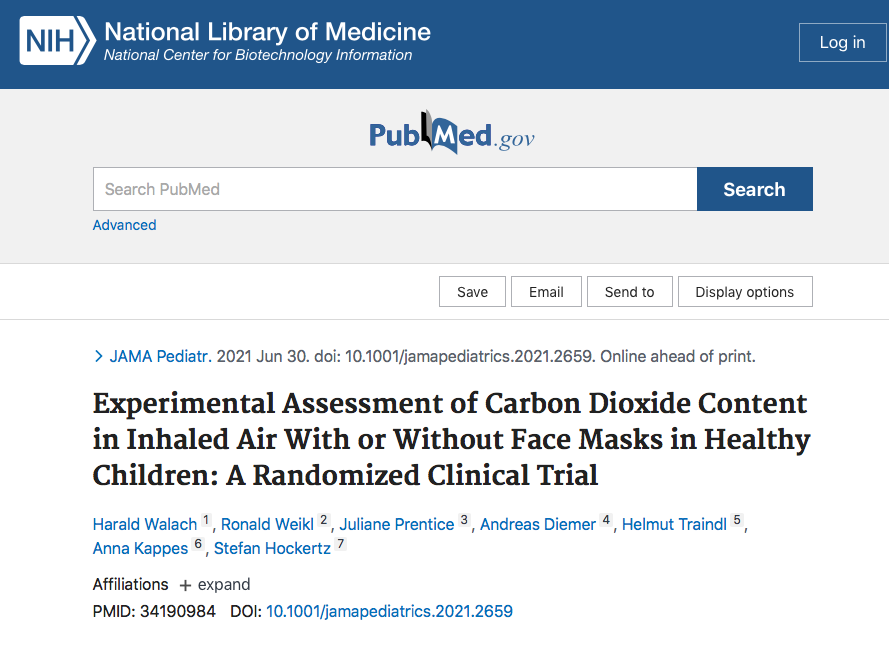 Experimental Assessment of Carbon Dioxide Content in Inhaled Air With or Without Face Masks in Healthy Children A Randomized Clinical Trial  Source_jamanetwork.com

The normal content of carbon dioxide in the open is about 0.04% by volume (ie, 400 ppm). A level of 0.2% by volume or 2000 ppm is the limit for closed rooms according to the German Federal Environmental Office, and everything beyond this level is unacceptable.4

The mean (SD) age of the children was 10.7 (2.6) years (range, 6-17 years), and there were 20 girls and 25 boys. Measurement results are presented in the Table. We checked potential associations with outcome. Only age was associated with carbon dioxide content in inhaled air (y = 1.9867 – 0.0555 × x; r = –0.39; P = .008; Figure). Hence, we added age as a continuous covariate to the model. This revealed an association (partial η2 = 0.43; P < .001). Contrasts showed that this was attributable to the difference between the baseline value and the values of both masks jointly. Contrasts between the 2 types of masks were not significant. We measured means (SDs) between 13 120 (384) and 13 910 (374) ppm of carbon dioxide in inhaled air under surgical and filtering facepiece 2 (FFP2) masks, which is higher than what is already deemed unacceptable by the German Federal Environmental Office by a factor of 6. This was a value reached after 3 minutes of measurement. Children under normal conditions in schools wear such masks for a mean of 270 (interquartile range, 120-390) minutes.3 The Figure shows that the value of the child with the lowest carbon dioxide level was 3-fold greater than the limit of 0.2 % by volume.4 The youngest children had the highest values, with one 7-year-old child’s carbon dioxide level measured at 25 000 ppm.

The limitations of the study were its short-term nature in a laboratory-like setting and the fact that children were not occupied during measurements and might have been apprehensive. Most of the complaints reported by children3 can be understood as consequences of elevated carbon dioxide levels in inhaled air. This is because of the dead-space volume of the masks, which collects exhaled carbon dioxide quickly after a short time. This carbon dioxide mixes with fresh air and elevates the carbon dioxide content of inhaled air under the mask, and this was more pronounced in this study for younger children.

This leads in turn to impairments attributable to hypercapnia. A recent review6 concluded that there was ample evidence for adverse effects of wearing such masks. We suggest that decision-makers weigh the hard evidence produced by these experimental measurements accordingly, which suggest that children should not be forced to wear face masks.”