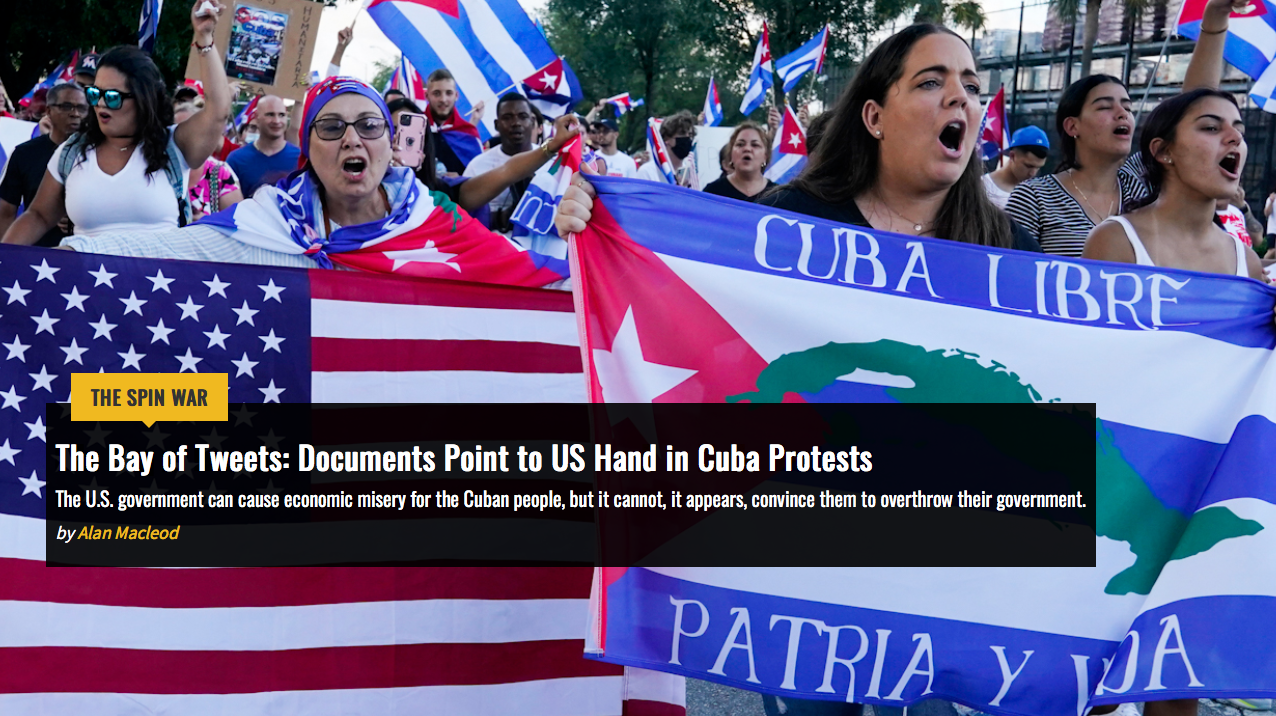 The Bay of Tweets: Documents Point to US Hand in Cuba Protests

“HAVANA — Cuba was rocked by a series of anti-government street protests earlier this week. The U.S. establishment immediately hailed the events, putting its full weight behind the protestors. Yet documents suggest that Washington might be more involved in the events than it cares to publicly divulge.

As many have reported, the protests, which started on Sunday in the town of San Antonio de los Baños in the west of the island, were led and vocally supported by artists and musicians, particularly from its vibrant hip-hop scene.

“For those new to the issue of Cuba, the protests we are witnessing were started by artists, not politicians. This song ‘Patria y Vida’ powerfully explains how young Cubans feel. And its release was so impactful, you will go to jail if caught playing it in Cuba,” said Florida Senator Marco Rubio, referencing a track by rapper Yotuel.

Both NPR and The New York Times published in-depth features about the song and how it was galvanizing the movement. “The Hip-Hop Song That’s Driving Cuba’s Unprecedented Protests,” ran NPR’s headline. Yotuel himself led a sympathy demonstration in Miami.

But what these accounts did not mention was the remarkable extent to which Cuban rappers like Yotuel have been recruited by the American government in order to sow discontent in the Caribbean nation. The latest grant publications of the National Endowment for Democracy (NED) — an organization established by the Reagan administration as a front group for the CIA — show that Washington is trying to infiltrate the Cuban arts scene in order to bring about regime change. “A lot of what we do today was done covertly 25 years ago by the CIA,” NED co-founder Allen Weinstein once told The Washington Post.

For instance, one project, entitled “Empowering Cuban Hip-Hop Artists as Leaders in Society,” states that its goal is to “promote citizen participation and social change,” and to “raise awareness about the role hip-hop artists have in strengthening democracy in the region.” Another, called “Promoting Freedom of Expression in Cuba through the Arts,” claims it is helping local artists on projects related to “democracy, human rights, and historical memory,” and to help “increase awareness about the Cuban reality.” This “reality,” as President Joe Biden himself stated this week, is that the Cuban government is an “authoritarian regime” that has meted out “decades of repression” while leaders only “enrich themselves.”

Other operations the NED is currently funding include enhancing Cuban civil society’s ability to “propose political alternatives” and to “transition to democracy.” The agency never divulges with whom it works inside Cuba, nor any more information beyond a couple of anodyne blurbs, leaving Cubans to wonder whether any group even vaguely challenging political or societal norms is secretly bankrolled by Washington.

“The State Department, the U.S. Agency for International Development, and the U.S. Agency for Global Media have all financed programs to support Cuban artists, journalists, bloggers and musicians,” Tracey Eaton, a journalist who runs The Cuba Money Project, told MintPress. “It’s impossible to say how many U.S. tax dollars have gone toward these programs over the years because details of many projects are kept secret,” he added.

A currently active grant offer from the NED’s sister organization, USAID, is offering $2 million worth of funding to groups that use culture to bring about social change in Cuba. Applicants have until July 30 to ask for up to $1 million each. The announcement itself references Yotuel’s song, noting, “Artists and musicians have taken to the streets to protest government repression, producing anthems such as ‘Patria y Vida,’ which has not only brought greater global awareness to the plight of the Cuban people but also served as a rallying cry for change on the island.”

The hip-hop scene in particular has long been a target for American agencies like the NED and USAID. Gaining popularity in the late 1990s, local rappers had a considerable impact on society, helping bring to the fore many previously under-discussed topics. The U.S. saw their biting critiques of racism as a wedge they could exploit, and attempted to recruit them into their ranks, although it is far from clear how far they got in this endeavor, as few in the rap community wanted to be part of such an operation.”