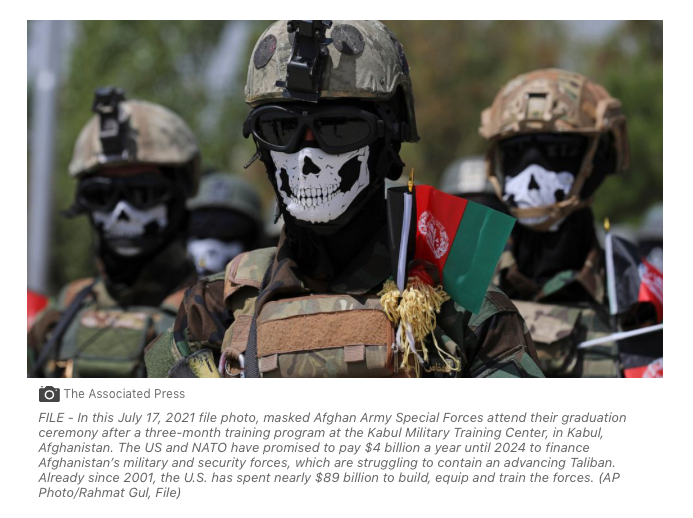 “The U.S. and NATO have promised to pay $4 billion a year until 2024 to finance Afghanistan’s military and security forces, which are struggling to contain an advancing Taliban”

“ISLAMABAD — The U.S. and NATO have promised to pay $4 billion a year until 2024 to finance Afghanistan’s military and security forces, which are struggling to contain an advancing Taliban. Already, the U.S. has spent nearly $89 billion over the past 20 years to build, equip and train Afghan forces.

Yet America’s own government watchdog says oversight of the money has been poor, hundreds of millions of dollars have been misspent and corruption is rife in the security apparatus.

Monitoring where the future funding goes will become virtually impossible after Aug. 31, when the last coalition troops leave. Here is a look at some of the issues:

Nearly $83 billion has been spent to build, equip, train and sustain Afghanistan’s National Defense and Security Forces, which include the military, national police and the elite special forces.

That figure covers a wide range of items. For example, the U.S. spent nearly $10 billion for vehicles and aircraft. It spent $3.75 billion on fuel for the Afghan military between 2010-2020.

Separately, another $5.8 billion went into economic and government development and infrastructure since 2001, with the expressed goal of winning public support and blunting the Taliban insurgency. The figures are from reports by John Sopko, the Special Inspector General on Afghanistan Reconstruction, or SIGAR, tasked with monitoring how U.S. taxpayer dollars are spent.

The U.S. allocation for 2022 is $3.3 billion. It will include $1 billion to support the Afghan Air Force and Special Mission Wing, $1 billion for fuel, ammunition and spare parts, and $700 million to pay salaries for Afghan soldiers.

It is difficult to see how the Afghan government will be able to pay to keep its military running after 2024.”

“China and Russia will be key to solving an ancient geopolitical riddle: how to pacify the ‘graveyard of empires’…

Congressman Jim McDermott on CNN Crossfire Sept. 10. 2002
Admit the US placed the Taliban in Afghanistan in 1996. LINK

CIA funded and installed the Taliban during the 1990s

Link To Article_The CIA’s “Army”: A Threat to Human Rights and an Obstacle to Peace in Afghanistan