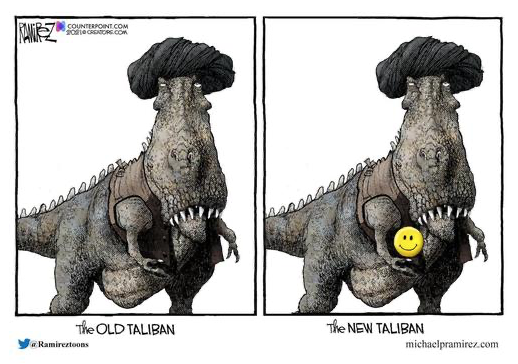 Afghanistan & The Sham Of Democracy Promotion

“Americans finally recognize the military lies that pervaded the success claims of the 20-year war in Afghanistan.  But democracy promotion was an even bigger sham. Afghanistan was Exhibit A for the triumphal crusade to spread freedom and democracy.

After the U.S. invasion in 2001, the U.S. government spent more than $600 million to support elections and democratic procedures in Afghanistan (part of the $143 billion the U.S. spent there for relief and reconstruction). Washington bragging points were always more important than Afghan preferences. “In 2002 and 2003, when Afghan tribal councils gathered to write a new constitution, the U.S. government gave [bribes] to delegates who supported Washington’s preferred stance on human rights and women’s rights,” the Washington Post reported in 2019. President George W. Bush boasted in 2004: “Afghanistan has now got a constitution which talks about freedom of religion and talks about women’s rights…Democracy is flourishing.” Though Bush’s reelection campaign speeches were larded with such lines, women in many parts of Afghanistan continued to be oppressed even worse than characters in American country music songs. One international aid worker commented that during the Taliban era “if a woman went to market and showed an inch of flesh she would have been flogged—now she’s raped.”

Hamid Karzai, the slick operator who the Bush administration installed to rule Afghanistan after 9/11, won a rigged 2004presidential election. Karzai approved a law that entitled a husband to starve his wife if she refused his sexual demands.

During his 2008 presidential campaign, Obama labeled the conflict in Afghanistan the “right war.” By the time Obama took office, the Taliban were vigorously reviving and Afghans were shunning the corrupt puppet regime the U.S. installed in 2002.

President Obama justified his 2009 troop surge in Afghanistan to bolster its democracy. When Obama spoke to the Veterans of Foreign Wars convention in August 2009, he boasted that “our troops are helping to secure polling places for this week’s election so that Afghans can choose the future that they want.” In reality, Obama effectively sent American soldiers to serve as bodyguards for Karzai’s minions to steal the election. At first glance, Karzai won a narrow victory. But two weeks after the election, the New York Times reported that Karzai’s operatives set up as many as 800 fictitious polling sites “where no one voted but where hundreds of thousands of ballots were still recorded toward the president’s re-election.” In some Afghan provinces, pro-Karzai ballots outnumbered actual voters by tenfold. Peter Galbraith, a senior United Nations official in Afghanistan, was fired after he estimated that a third of Karzai’s votes were bogus. Galbraith wrote, “No amount of spin can obscure the fact that we spent upwards of $200 million on an election that has been a total fiasco” which “handed the Taliban its greatest strategic victory.”

Despite the shenanigans, the Obama administration praised Karzai as if he had won fair and square. The Obama administration told Congress that the decision to send far more U.S. troops to Afghanistan depended on the Afghan government’s “ability to hold credible elections,” among other tests. After the 2009 Afghan election turned into a sham, Obama decided it was “close enough for government work” to democracy. Thanks to Obama’s surge, 1,400 American soldiers died in part to propagate the mirage of Afghan democracy.

Afghan officials conspired for more than 15 years to both multiply and ignore election fraud. As early as 2009, U.S. Admiral Mike Mullen, then Chairman of the Joint Chiefs of Staff, warned that the result was that the Afghan government’s legitimacy “is, at best, in question right now and, at worst, doesn’t exist.” An analysis by the U.S. Agency for International Development of the 2014 Afghan election noted that “several prominent election officials associated with fraud during past elections were promoted or given ministerial appointments.”

Behind closed door, D.C. poohbahs admitted their Afghan charade. At a confidential 2015 National Security Council meeting, President Obama admitted that the U.S. would never “transform Afghanistan into a semblance of a democracy able to defend itself,” the New York Times reported. But that didn’t deter Obama from publicly bragging the following year that U.S. troops and diplomats had helped Afghanistan “establish a democratic government.”

To buttress the new democracy, the U.S. government spent a billion dollars to promote the “rule of law” and justice reform in Afghanistan. But such programs were as wasteful as the rest of the U.S. dollar deluge on that nation. As the Christian Science Monitor noted in mid-2010, the Obama administration’s Agency for International Development “created an atmosphere of frantic urgency about the ‘burn rate’—a measure of how quickly money is spent. Emphasis gets put on spending fast to make room for the next batch from Congress.”

One American contractor received $35 million to promote the rule of law in Afghanistan in part by distributing kites and comic books to kids. The New York Times reported that the contractor “arranged an event to hand out kites and comic books to children. The kites were festooned with slogans about gender equality and rule of law that most of the attendees could not read. Police officers guarding the event stole many of the kites, beating some of the children, while fathers snatched kites from their girls to give to the boys.” A 2015 report by the Special Inspector General for Afghanistan Reconstruction (SIGAR) report found that the Afghan “rule of law” spending had been a dismal failure.

Afghan democracy was a bigger fraud than almost anyone wanted in D.C. would admit. One of the best demolitions can be found in a February 2021 report, “Elections: Lessons from the U.S. Experience in Afghanistan,” produced by the Special Inspector General for Afghanistan Reconstruction (SIGAR). After more than 15 years of pro-democracy “assistance,” Afghanistan’s 2019 presidential election was “the most corrupt the country had ever held,” according to expert consulted by SIGAR.

U.S. tax dollars poured into the coffers of Afghanistan’s Electoral Complaints Commission (ECC) to safeguard voting. Alas—that agency was a prime source of the most brazen vote stealing. ECC bosses were careful not to hire almost anyone with electoral experience since such folks might raise troubling questions. A former top ECC official told SIGAR that “one criterion for chief electoral officer applicants in 2018 was how well the candidates were dressed. He said this category was used as a pretext to reduce the scores of less pliable candidates.” It is unknown whether this villainy character test was inspired by Washington’s K Street lobbyists.

Afghan elections were institutionalized racketeering because the rules were always in flux. SIGAR noted, “Only one of the country’s election laws has ever been passed by parliament; the rest were presidential decrees that were never referred to the parliament for consideration.” The SIGAR report quoted election experts: “The likelihood of a credible election is inversely proportional to the degree to which the ruling regime directly controls the election management body.” Afghan voting records were a total mess, making it easy for politicians to fabricate claims about the “will of the people.” SIGAR concluded, “Afghanistan’s national voter registry and the voter registration process are exceptionally vulnerable to manipulation and mismanagement.”

It is tricky to build a viable democracy when elected officials receive a license to steal. After noting the hefty bribes that politicians pay to election officials, SIGAR explained: “One reason candidates may be willing to pay such high prices for seats in parliament is to protect ill-gotten fortunes…By becoming members of parliament, they can gain access to new sources of illicit revenue and immunity from prosecution.” That parliament was the last place on earth to seek support for honest elections.

Afghan experiences also offer lessons for Americans confounded by disputes regarding the 2020 U.S. election, including the controversies surrounding computer voting. As one election expert told SIGAR, “There is no difference between stuffing 100 ballots and pressing a button on an electronic voting machine 100 times.” Afghan President Ashraf Ghani decreed that the 2019 election must rely on electronic voting. But SIGAR noted that electronic voting “did not reduce fraud overall; it just displaced it to other parts of the electoral cycle.” Confidence in Afghan electronic voting was not assisted by the secrecy surrounding the software and equipment. After the 2019 presidential election, Afghanistan’s Independent Election Commission declared that it could not “share information” about how votes were being reconciled because “the contractor, Dermalog, controlled that process.” SIGAR quoted experts who warned that “because governments often control electoral commissions and the procurement of election technology, they are well placed to use it to commit fraud.” SIGAR ruefully noted, “The true purpose of adopting election technologies may not be to actually reduce fraud, but to create the illusion of doing so.”

Afghan debacles are a reminder that there is no “guardian angel of democracy.” Politicians permitting citizens to vote does not assure that election results will receive even a whiff of legitimacy. Once fraud or suspicions of fraud reach a certain level, any election winners will be suspected scoundrels. A U.S. Army colonel who deployed several times to Afghanistan told SIGAR that as early as 2006, the Afghan government had “self-organized into a kleptocracy.” Officials who were stealing everything else never hesitated to steal votes.

Biden, like Obama and George W. Bush, is seeking to make “democracy promotion” a redeeming theme for his presidency. But no Washington pundit, politician, or “expert” who vouched for Afghan democracy should ever be trusted again. The U.S. government will continue meddling in foreign elections as long as American politicians think they can gain influence—or perhaps contracts for their friends or family members. There is no reason to expect Biden’s “democracy promotion” to be any cleaner than his Ukraine policy during the Obama administration.

The collapse of the Afghan government settled any doubts about whether intellectuals are some of Washington’s biggest con artists. They profited mightily by pirouetting as experts with lavish government contracts that produced nothing except windfall profits for overpriced D.C. restaurants. Any think tank or research institute or Beltway Bandit that was honest about Afghanistan being a quagmire for democracy would have been banned from future contracting.

Americans also need to take lessons from the endless lies that Washington told about Afghan democracy. Are U.S. government officials more honest when they talk about American democracy than when they praise sham democracies abroad? Unfortunately, no one is talking of the peril of the “Afghanization” of American democracy.”

Link To_Congressman Jim McDermott on CNN Crossfire Sept. 10. 2002 Admit the US placed the Taliban in Afghanistan in 1996