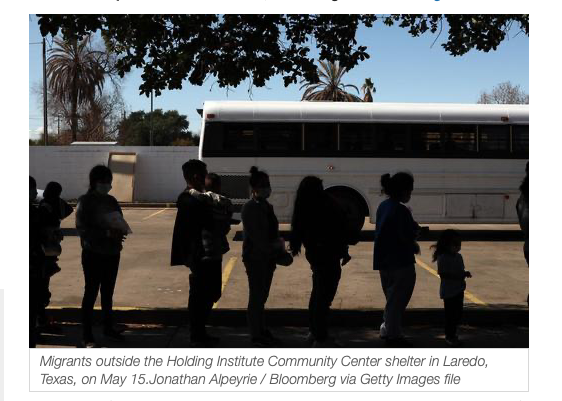 The city of Laredo, Texas has stopped accepting migrants who have been bused in from elsewhere after two local government officials confirmed that 40% of them have tested positive for Covid-19, according to the Washington Examiner.

Not a peep from the Biden administration about mandatory vaccinations for illegals, of course.

“That was very high,” said Laredo Mayor Pete Saenz in an interview with the Examiner, referring to the infection rate among migrants dropped off by the Border Patrol last week. The figures were confirmed by Laredo’s health authority, Dr. Victor Trevino.

Concerned that migrants arriving in Laredo would further strain hospital resources, Laredo officials contracted private bus companies to transport migrants arriving from the Rio Grande Valley to larger cities across the state. By not admitting migrants on the McAllen buses, the city is not required to test them for the coronavirus and could forward the families elsewhere. Those who test positive cannot travel and must be quarantined for 10 days, a situation Saenz wanted to evade to avoid migrant overflow. -Washington Examiner

Thousands of migrant families have been transported from the Rio Grande Valley region to Laredo because of overcrowded shelters. The migrants were immediately tested upon arrival – with positivity  rates jumping from 4% in April to 40% in August.

Meanwhile, Judicial Watch reports that the Department of Homeland Security has quietly been using a small regional airport in central Texas to disperse “large groups of illegal immigrants throughout the U.S. after releasing them from detention facilities in other parts of the state, city and federal sources confirm.”

Local authorities in the city where this is occurring, Abilene, are being kept in the dark and a federal lawmaker is demanding an end to the “reckless and irresponsible practice” as well as answers from DHS after a series of local news reports exposed the covert operation.

Abilene is located about 180 miles west of Dallas and has a population of around 120,000. The area’s airport is run by the city and its transportation director reveals in a news story that local officials are not aware of what exactly is going on with the illegal immigrant flights. The airport is only given 24 to 48 hours of notice before flights arrive, according to Abilene Director of Transportation Don Green, who verifies the planes are private charters from Immigration and Customs Enforcement (ICE), the DHS agency in charge. The Texas news conglomerate, which also publishes reports in Spanish, writes that it “shot video of strange activity at the airport” and includes the footage on its website. It shows immigrants exiting unmarked planes, getting frisked, then boarding buses. Some footage includes buses arriving at the airport where immigrants are seen getting off and boarding planes to different parts of the U.S. -Judicial Watch”

Read the rest of the report here.