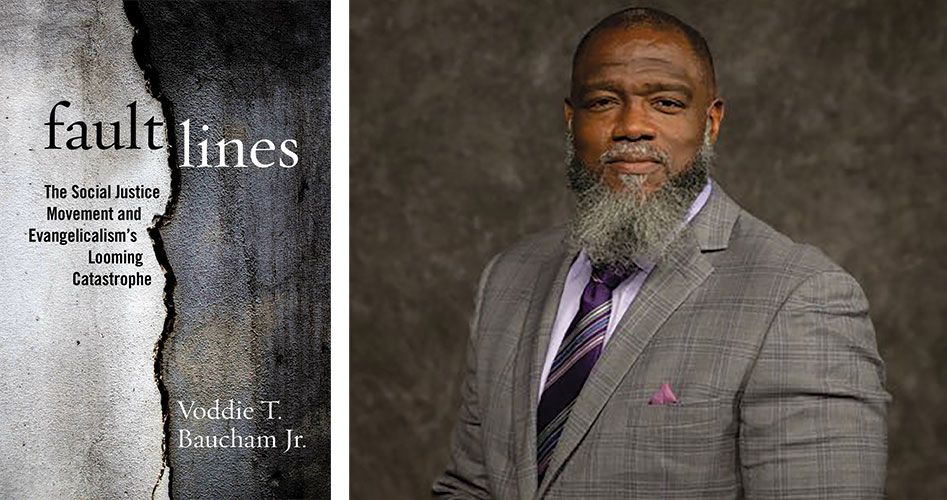 “Critical Race Theory and Social Justice are not just bad ideas, they constitute a dangerous “cult” with “demonic” ideology and theology that has infiltrated virtually every institution in America, including the church. That is the powerful message of Pastor Voddie Baucham — a former Malcolm X shirt-wearing radical raised by a single mother on the rough streets of Southern Los Angeles — in his new book Fault Lines: The Social Justice Movement and Evangelicalism’s Looming Catastrophe.

After a brief background on the geological fault line that runs through California, Baucham explains that there is a similar “fault line” running through the church that will rupture at some point in the not-too-distant future. He argues that this coming cataclysm is inevitable at this point, with countless church leaders having jumped on the anti-biblical bandwagon in pursuit of “social justice” rather than “biblical justice.”

“When the shift comes, the ground will open up, a divide that was once invisible will become visible, and the two will find themselves on opposite sides of it,” Baucham warns, adding that some churches and denominations are already in turmoil or even splitting over the battle. That chaos is only going to get worse before it gets better, and Baucham wants as many believers as possible to be on the right side of the divide.

While Fault Lines is primarily aimed at evangelical Christians, anyone would benefit from reading it. In fact, the book represents perhaps the single most devastating exposé of Critical Race Theory and the social-justice “cult” in existence today. And because these evils have spread like a cancer throughout government, K-12 education, entertainment, business, academia, and more, the book should be considered essential reading for everyone.

As Baucham himself points out, the United States is “on the verge of a race war, if not a complete cultural meltdown.” He is right, of course, as anyone paying attention knows. Leading forces in the effort to plunge America into this escalating conflict include Black Lives Matter, which Baucham exposes as a Marxist-Leninist, pagan movement that aims to demolish the family and Christian civilization.

To avoid any accusation that he is confronting straw men of his own making, Baucham starts off by carefully going over the definitions that leading Critical Race Theorists and social-justice warriors themselves offer. The book gives them plenty of space to explain their arguments, ideas, and ideologies — before proceeding to rip them to shreds. Baucham also traces the history of the ideas from Karl Marx, the Frankfurt School, communist revolutionary Antonio Gramsci of Cultural Marxism fame, all the way up to the present.

Critical to Baucham’s argument is that CRT and “anti-racism” are actually a false religion — a cult with its own perverted theology that is completely at odds with the Bible and traditional Christian doctrine. The cult has its own cosmology with its own version of “original sin” (racism), law (antiracism), gospel (racial reconciliation), martyrs, priests, liturgy, canon, and more. He proceeds to debunk them with masterful precision.

Consider the horror of this new false religion. As Baucham demonstrates, the new “original sin” is racism, because racism is said to be at the root of virtually every sin, injustice, and evil imaginable. Individuals of European heritage are alleged to be born with this sin. And yet, in CRT’s theological framework, it is also the new unpardonable sin. No amount of penance, confession, reparations, or repentance can ever cleanse a person of his collective “sin” involving melanin levels. He must perpetually engage in the “work” of “antiracism” with no hope of redemption.

Of course, Christianity teaches that each individual is guilty of sin, but that God offers forgiveness through Christ. The CRT cult, by contrast, like Marxist ideologies everywhere, divides society into two categories — oppressor and oppressed. And yet, despite the self-evident contradiction and incompatibility of Christianity and CRT, Baucham shows, even conservative churches and seminaries are being infiltrated by the dangerous and “demonic” doctrines of the “woke” CRT cult.

Baucham also shows where the conductors of this crazy train are leading America. Ibram X. Kendi, one of the foremost authorities within the new cult, makes his vision plain. “To fix the original sin of racism, Americans should pass an anti-racist amendment to the U.S. Constitution,” Kendi explains, adding that this would create a new “Department of Antiracism” at the Cabinet level. “This DOA would be responsible for preclearing all local, state and federal public policies.”

In other words, if the leaders of the “woke” CRT cult get their way, self-government in America is over. Instead, all Americans would submit to the unchecked tyranny of “experts on racism” who run the DOA, with “no political appointees” allowed, Kendi explains. A technocracy of anti-God, race-obsessed leftists, in short.

Another key service performed by Baucham in Fault Lines is to decipher the new language used by the CRT-antiracism cult. For instance, the words “racism” and “white supremacy,” when used by critical theorists, no longer mean what normal people understand them to mean. Baucham quotes books and writings of leading CRT theologians to prove his point. All “whites” are now racist, and every institution people of European descent ever created is stained by “white supremacy.”

One of the tasks Baucham does phenomenally well is debunk the lies and distortions that underpin the CRT narrative. Everything from crime and police data to economic statistics is analyzed to show that CRT is based on fraud from top to bottom. No, racist police are not hunting down black Americans. No, black Americans are not being “oppressed” by “systemic racism” or “institutional racism.” And no, the tragedies cited to justify these narratives — George Floyd, for instance — are not what they are portrayed as by critical theorists.

Indeed, Baucham shows that as recently as 2008, key black leaders such as Barack Obama publicly spoke on problems plaguing the black community that had nothing to do with alleged racism. Key among those problems are fatherless homes, which, as Obama pointed out, produce children who are far more likely to get involved in crime and live in poverty.

Incidentally, the high crime rates and high rates of illegitimacy came after black Americans were freed from slavery and after the end of Jim Crow laws in Southern states, strongly suggesting something other than “racism” is to blame for the contemporary problems.

In response to those problems plaguing black communities, Baucham also shows,  it was black leaders who demanded a tough-on-crime approach by government to protect black communities from the terror of gangs, criminals, and drugs. And yet today, the high rates of incarceration are offered as proof that America is systemically racist. Meanwhile, actual racist attacks on the black community such as the abortion genocide inspired by eugenicists such as Planned Parenthood founder Margaret Sanger are ignored or even celebrated by the same forces peddling CRT.

Baucham’s praise for America, his love for his country, and his appreciation for the blessings America has provided run through the entire book. “I believe America is one of the least racist countries in the world,” he says, comparing it to his current nation of residence (Zambia) and other nations around the world. In fact, he argues, even though there are some individual racists left, America does not have a “racial injustice problem” at all.

Indeed, as Baucham points out, CRT is just one facet of the Marxist effort to divide and conquer America. Other categories of alleged “oppressors” to be overthrown include men, heterosexuals, “cisgender” individuals (those who accept their biological sex), the able-bodied, the native-born, and even Christians. “That’s right: Christianity is part of the oppressive hegemony,” he warns his fellow Christians, sounding the alarm about what is coming as CRT and social-justice ideology continue ripping through the church and the nation.

Baucham’s words on America are enough to warm the heart of any patriotic American demoralized by the ubiquitous lies. “I am not an African. I am not an African American. I am an American, and I wouldn’t want to be anything else,” he says in his concluding pages. “America doesn’t owe me anything. America has blessed me beyond measure. If anything, I owe America.” More importantly, he adds, he owes his Savior and his brothers and sisters in Christ. ”