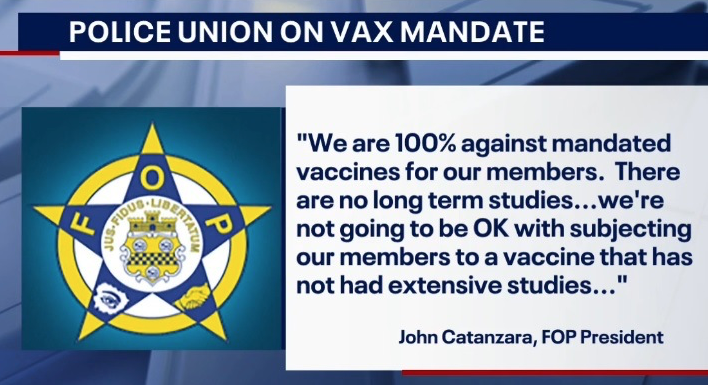 “A leading Chicago police union opposed an impending mandate from Mayor Lori Lightfoot that requires all city officers to get the COVID-19 vaccine.

John Catanzara, president of the Chicago Fraternal Order of Police, said his group is “100% against mandated vaccines for our members,” according to a statement given to Fox 32 .

“This vaccine has no studies for long-term side effects or consequences. None,” Catanzara told the Chicago Sun-Times . “To mandate anybody to get that vaccine, without that data as a baseline , amongst other issues, is a ‘Hell, no’ for us.”

He also insisted all police unions in the city oppose such a mandate.

“It ain’t just our guys. It’s the sergeants, lieutenants, and captains. This is a united front. All four of the unions. It’s no longer John Catanzara’s big mouth, like they like to spin it all the time,” he told the outlet.

Lightfoot confirmed on Wednesday all city employees would be required to get fully vaccinated against the virus, effective Oct. 15. She first announced her intention to issue a vaccine mandate for city employees earlier this week.”