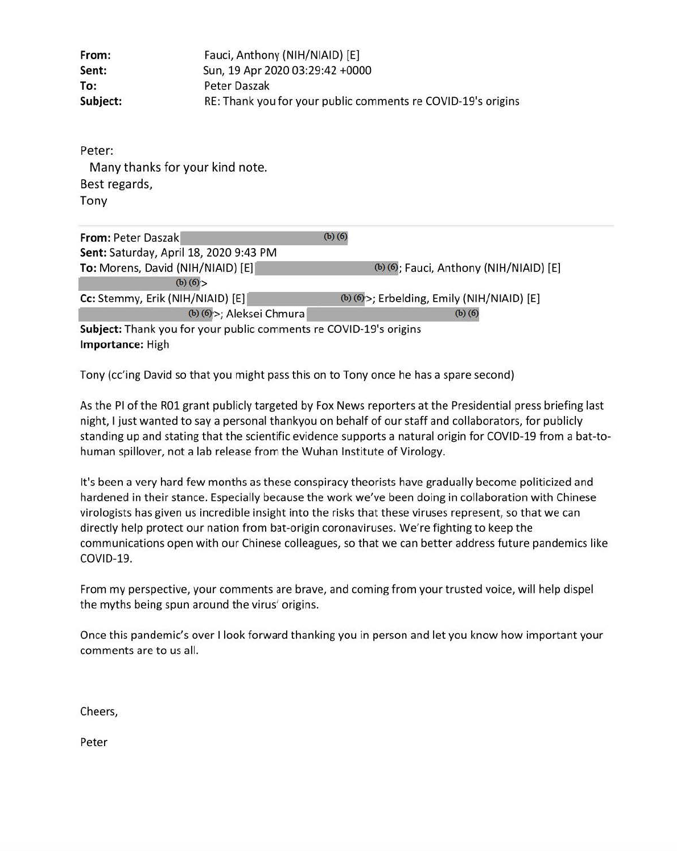 “On April 29, 2020, ICAN submitted a FOIA request to the National Institutes of Health (NIH) and requested copies of Dr. Anthony Fauci’s emails related to COVID-19.

After the NIH failed to produce responsive documents, ICAN sued the NIH in federal court.  In response, the NIH produced, among other things, a redacted copy of an email from Peter Daszak to Dr. Fauci and others. Mr. Daszak is the President of EcoHealth Alliance which is the group through which Dr. Fauci’s agency funneled money to the virology lab in Wuhan, China.

This email was sent on April 18, 2020, early in the coronavirus outbreak. The redacted copy originally produced to ICAN disclosed a portion of the email in which Mr. Daszak stated that he

just wanted to say a personal thank you on behalf of our staff and collaborators, for publicly standing up and stating that the scientific evidence supports a natural origin for COVID-19 from a bat-to-human spillover, not a lab release from the Wuhan Institute of Virology.

A significant portion of the email, however, was redacted in the original production.

the work we’ve been doing in collaboration with Chinese virologists has given us incredible insight into the risks that these viruses represent, so that we can directly help protect our nation from bat-origin coronaviruses.  We’re fighting to keep the communication open with our Chinese colleagues, so that we can better address future pandemics like COVID-19.

Mr. Daszak, in this unguarded email, reveals a clear truth: Fauci, directly or indirectly through Daszak, was collaborating with Chinese virologists to study bat-origin coronaviruses.  This further supports that Dr. Fauci provided false testimony to Congress regarding his and his agency’s involvement with Chinese virologists and their research on bat-origin coronaviruses, including further supporting Senator Rand Paul’s accusation that Dr. Fauci lied to Congress in claiming that NIH was not involved in funding gain of function research at the Wuhan lab.”