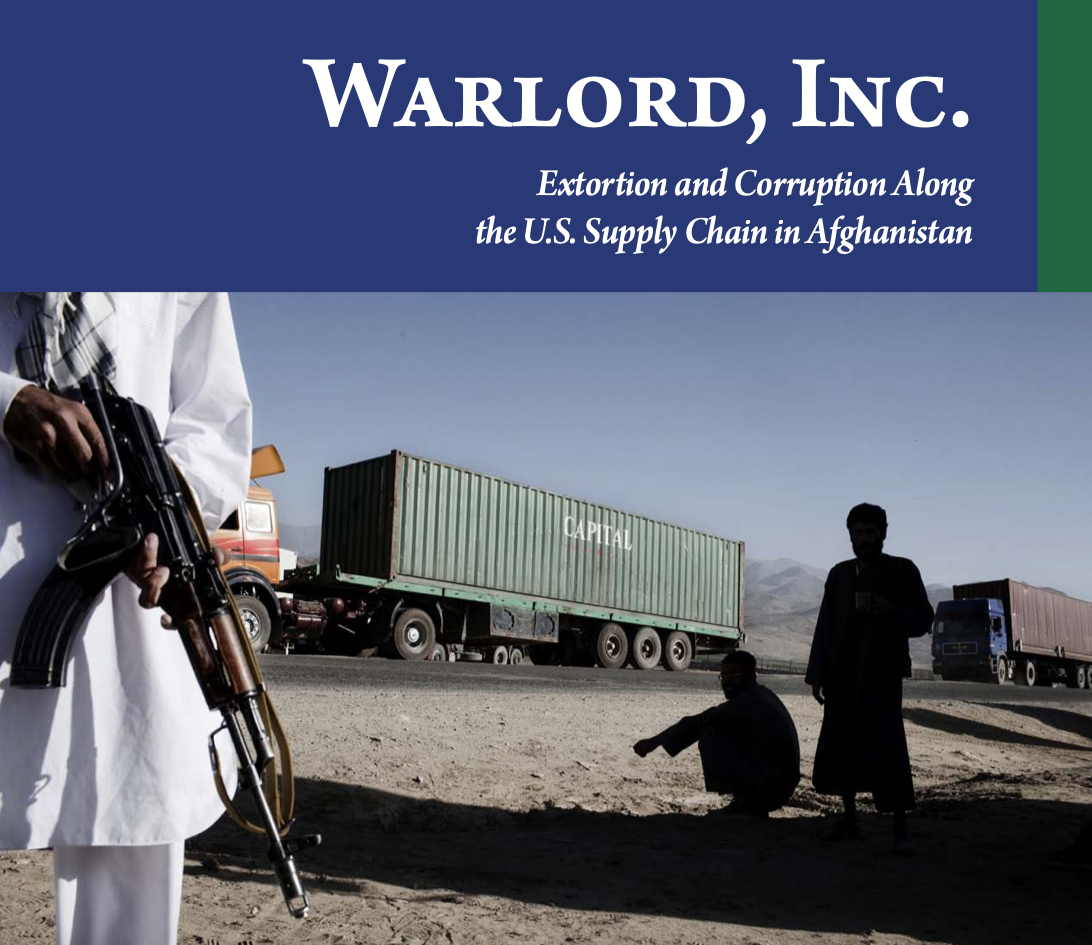 “A congressional report obtained by CBS News indicates that, through a government contract, U.S. taxpayer dollars could wind up in the hands of the Taliban in Afghanistan.”  Video

“The establishment of Task Force 2010 shows that the Department of Defense is well aware, at the highest levels, of concerns that U.S. contractors are funding warlordism and corruption in Afghanistan.” p.66  –Warlord, Inc

“We have to do a better job in the international side to coordinate our aid, to get more accountability for what we spend in Afghanistan. But much of the corruption is fueled by money that has poured into that country over the last eight years. And it is corruption at every step along the way, not just in Kabul.

You know, when we are so dependent upon long supply lines, as in Afghanistan, where everything has to be imported, it’s much more difficult than it was in Iraq, where we had Kuwait as a staging ground to go into Iraq. You offload a ship in Karachi and
by the time whatever it is – you know, muffins for our soldiers’ breakfasts or anti-IED equipment – gets to where we’re headed, it goes through a lot of hands. And one of the major sources of funding for the Taliban is the protection money.”

Link To_Congressman Jim McDermott on CNN Crossfire Sept. 10. 2002 Admit the US placed the Taliban in Afghanistan in 1996

“A recently released and highly critical report by the US congress says the expanding US war in Afghanistan has had an unintended and expensive consequence. Money being paid to Afghan firms providing security to supply convoys, is ending up in the pockets of the Afghan warlords and corrupt officials. Congressional investigators say some money may even be finding its way into the hands of the Taliban.”

“Billion Dollar Base: Dismantling Camp Bastion tells the story of the team dismantling the British Army base in Afghanistan. For eight years it’s been the powerhouse of UK and US military operations. Now Britain’s biggest overseas base since World War II is closing down for good. This documentary was given exclusive access to the men and women whose job it was to pack up this giant jigsaw puzzle, ending one of the longest wars in British history. A town bigger than many in Britain, with a massive infrastructure – airport, hospital, fast food restaurants – is being dismantled bolt by bolt and sent back to the UK. What is left will be handed over to the Afghans. But with defences and manpower depleting daily, in the face of a constant threat from the Taliban, it’s a dangerous race against time to close this city in the sand.”