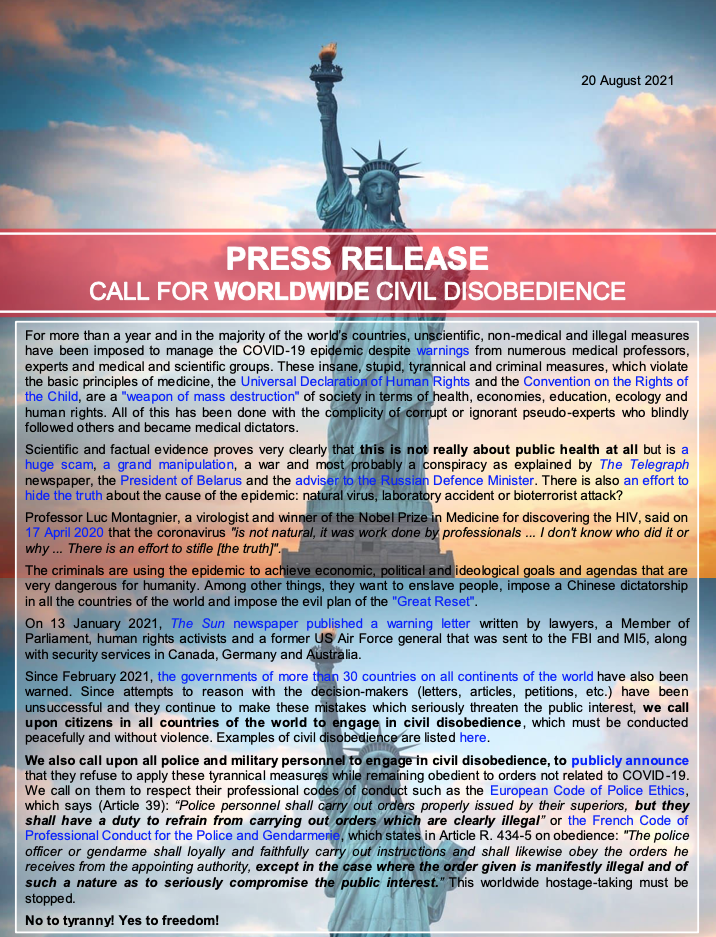 “For more than a year and in the majority of the world’s countries, unscientific, non-medical and illegal measures have been imposed to manage the COVID-19 epidemic despite warnings from numerous medical professors, experts and medical and scientific groups. These insane, stupid, tyrannical and criminal measures, which violate the basic principles of medicine, the Universal Declaration of Human Rights and the Convention on the Rights of the Child, are a “weapon of mass destruction” of society in terms of health, economies, education, ecology and human rights. All of this has been done with the complicity of corrupt or ignorant pseudo-experts who blindly followed others and became medical dictators.

Scientific and factual evidence proves very clearly that this is not really about public health at all but is a huge scam, a grand manipulation, a war and most probably a conspiracy as explained by The Telegraph newspaper, the President of Belarus and the adviser to the Russian Defence Minister. There is also an effort to hide the truth about the cause of the epidemic: natural virus, laboratory accident or bioterrorist attack?

Professor Luc Montagnier, a virologist and winner of the Nobel Prize in Medicine for discovering the HIV, said on 17 April 2020 that the coronavirus “is not natural, it was work done by professionals … I don’t know who did it or why … There is an effort to stifle [the truth]”.

The criminals are using the epidemic to achieve economic, political and ideological goals and agendas that are very dangerous for humanity. Among other things, they want to enslave people, impose a Chinese dictatorship in all the countries of the world and impose the evil plan of the “Great Reset”.

On 13 January 2021, The Sun newspaper published a warning letter written by lawyers, a Member of Parliament, human rights activists and a former US Air Force general that was sent to the FBI and MI5, along with security services in Canada, Germany and Australia.

Since February 2021, the governments of more than 30 countries on all continents of the world have also been warned. Since attempts to reason with the decision-makers (letters, articles, petitions, etc.) have been unsuccessful and they continue to make these mistakes which seriously threaten the public interest, we call upon citizens in all countries of the world to engage in civil disobedience, which must be conducted peacefully and without violence. Examples of civil disobedience are listed here.

We also call upon all police and military personnel to engage in civil disobedience, to publicly announce that they refuse to apply these tyrannical measures while remaining obedient to orders not related to COVID-19. We call on them to respect their professional codes of conduct such as the European Code of Police Ethics, which says (Article 39): “Police personnel shall carry out orders properly issued by their superiors, but they shall have a duty to refrain from carrying out orders which are clearly illegal” or the French Code of Professional Conduct for the Police and Gendarmerie, which states in Article R. 434-5 on obedience: “The police officer or gendarme shall loyally and faithfully carry out instructions and shall likewise obey the orders he receives from the appointing authority, except in the case where the order given is manifestly illegal and of such a nature as to seriously compromise the public interest.” This worldwide hostage-taking must be stoppe d.

No to tyranny! Yes to freedom!”

Our names and professions (from page 19):

For Life On Earth

The FLOE Show 1: Who’s pulling the strings on the Great Reset global putsch?