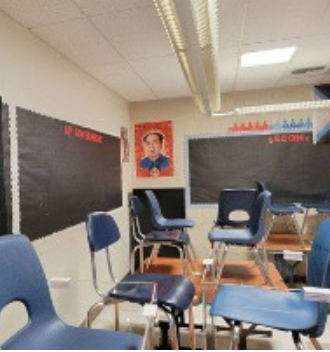 “Project Veritas published an undercover video featuring Gabriel Gipe, a high school teacher in Sacramento who admitted being a member of Antifa and working to turn his students into leftist revolutionaries. He told the reporter he has “180 days to turn them [students] into revolutionaries.” When asked how he accomplishes this goal, he said, “Scare the f**k out of them.” He motivates his students to join Antifa protests and activities by giving extra credit to those who attend. Gipe teaches government classes to advanced students at Inderkum High School in the Natomas Unified School District. Project Veritas will live stream the Natomas School Board meeting on Wednesday, September 1st, at this link: https://natomasunified.org/board-of-trustees/videos/ -GEG”

“This is a recently discovered excerpt from G. Edward Griffin’s 1984 interview with KGB defector, Yuri Bezmenov, who explains the four stages of communist strategy for taking over the U.S. from within. It is sobering to realize that stage three is almost complete. Stage Four is martial law from which there is no escape. Americans are running out of time to take the Red Pill.”