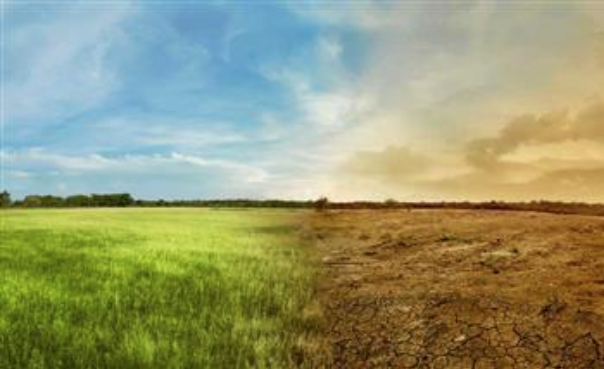 Geoengineering Is No Longer a Secret Conspiracy

Climate change may be at the point of no return, with heat waves, hurricanes and other extreme weather likely to worsen as global warming spirals out of control, a report by the United Nations Intergovernmental Panel on Climate Change (IPCC) warned in August 2021.1,2

In response, the U.N. is now considering a controversial form of geoengineering, involving spraying sulfate aerosols into the Earth’s stratosphere in order to modify climate3 — with unknown, and potentially disastrous, effects.

Weather modification and climate control have long been labeled as science fiction fantasy or conspiracy theory, but the large-scale manipulation of the Earth’s climate, known as geoengineering,4is becoming increasingly mainstream.

While geoengineering could have the intended effect of altering climate, including lowering global temperatures, its unintended consequences, which include altering rainfall and potentially rendering some regions of Earth unable to grow food, could be permanent, and catastrophic.

One of the controversial geoengineering techniques being considered by the U.N. involves spraying sulfate aerosols about 12 to 16 miles above the Earth’s surface. The tiny reflective particles would act as reflectors, bouncing sunlight back into space instead of onto the Earth’s surface.5

Earth’s climate is largely controlled by how much solar radiation reaches the Earth and how much is absorbed by its surface or reradiated to space. Cloud coverage and greenhouse gasses are examples of factors that influence the reflectance of solar radiation.6

“If geoengineering proposals are to influence global climate in any meaningful way, they must intentionally alter the relative influence of one of these controlling mechanisms,” Britannica explains.7

As a result, additional geoengineering techniques — such as thinning out cirrus clouds in the upper atmosphere — would be necessary to counteract the decrease in precipitation. What could possibly go wrong?

Supercomputers have run models to predict how solar radiation management may affect different parts of the Earth, not only in terms of temperature but also rainfall and snowfall. Report author Govindasamy Bala, from the Indian Institute of Science, said “the science is there,”9 but it’s far from an exact one.

“I think the next big question,” Bala told Reuters, “is, do you want to do it? … That involves uncertainty, moral issues, ethical issues and governance.” As Reuters reported, “That’s because every region would be affected differently.

While some regions could gain in an artificially cooler world, others could suffer by, for example, no longer having conditions to grow crops.”10 Paulo Artaxo, environmental physicist at University of Sao Paulo and another report author, added:11

“Basically the message is more or less the same as (the previous report): The science is not mature enough. The side effects of any of the known geoengineering techniques can be very significant … Society has to consider if these side effects are too big to try any strategy.”

Geoengineering in the Works Since Mid-20th Century

It was the middle of the 20th century when geoengineering was first developed, using World War II technologies. Cloud seeding, for instance, has been used for decades12 and involves “seeding” clouds with silver iodide or solid carbon dioxide to promote rain and snow or weaken tropical storms. At least eight western U.S. states and dozens of countries use cloud seeding to enhance precipitation.13

“In addition, the U.S. military suggested that nuclear weapons might be used as tools to alter regional climates and make certain areas of the world more favorable for human habitation. This proposal, however, was not tested,” Britannica reports.14

The possibility of floating giant spaceships over the Earth to reflect sunlight has even been considered.16

In 2010, Bill Gates funded research to develop machines that would spray seawater into the clouds with the goal of increasing the ability to reflect sunlight into space, and therefore reduce global warming. The move triggered a call for a global ban on geoengineering experiments from the ETC Group and a comment from then co-executive director Jim Thomas:17

“We knew Microsoft was developing cloud applications for computers but we didn’t expect this. Bill Gates and his cloud-wrenching cronies have no right to unilaterally change our seas and skies in this way.”

Further, since at least 2012, Gates has funded climate scientists’ lobbying efforts to advance geoengineering in order to manipulate the global climate.

The scientists argued that spraying reflective particles of sulphur dioxide 30 miles above the Earth would be necessary to avoid catastrophic climate change, but critics argued the technologies could be used as a weapon or to advance wealthy societies at a disadvantage to poorer countries. At the time, The Guardian reported:18

“Concern is now growing that the small but influential group of scientists, and their backers, may have a disproportionate effect on major decisions about geoengineering research and policy.

‘We will need to protect ourselves from vested interests [and] be sure that choices are not influenced by parties who might make significant amounts of money through a choice to modify climate, especially using proprietary intellectual property,’ said Jane Long, director at large for the Lawrence Livermore National Laboratory in the US, in a paper delivered to a … geoengineering conference on ethics.

‘The stakes are very high and scientists are not the best people to deal with the social, ethical or political issues that geoengineering raises,’ said Doug Parr, chief scientist at Greenpeace. ‘The idea that a self-selected group should have so much influence is bizarre.’”

In 2018, Gates again agreed to help fund experiments for Harvard scientists, who proposed spraying the stratosphere with calcium chloride to help slow the Earth’s warming by blocking out the sun.19

Is Geoengineering Another Form of Social Control?

The concerns raised in 2012 have only grown more significant, as Gates remains heavily invested in climate modification technologies that not only will destabilize the Earth’s climate systems more, but also can be weaponized against the people by controlling rainfall and drought. In a previous interview I conducted with Vandana Shiva, Ph.D., she explained:

“The company that collects patents on gene-edited organisms, both in health and agriculture, is Editas, founded by a main financial investor for the Gates Foundation. Gates is also a big investor in Editas.

So, here’s a company called Editas to edit the world as if it is a Word program. The two scientists who got the Nobel Prize this year have both been funded in their research by Gates. My mind went back to how Rockefeller financed the research, got the Nobel Prize, and then made the money.

So, you finance the research. Then you finance the public institutions, whether they be national or international. You invest and force them down the path where they can only use what is your patented intellectual property. And, as he has said in an interview, his smartest investment was vaccines, because it is a 1-to-20 return. Put $1 in and make $20. How many billions of dollars have been put in? You can imagine how many trillions will be made.

At the end of it, where does food come from? It comes from seed. He wants to control it. It comes from land. He’s controlling that. He’s became the biggest farmland owner [in the U.S.]. But you need weather [control]. You need a stable climate.

So, what could be a weapon of control of agriculture? Weather modification. He calls it geoengineering. This is engineering of the climate. Again, making it look like he’s going to solve global warming by creating global cooling.”

Climate Crisis as an Alibi for Social Control

One of Gates’ long-term goals seems to be mastering control of global agriculture and food production. This strategy began with his support of GMOs in 1994 and has continued with “solutions” that target hunger via technology, chemicals and industry partners.

Now, as the largest owner of farmland in the U.S., he’s uniquely positioned to benefit heavily from the targeted use of geoengineering practices. Writing in The Defender, Robert F. Kennedy, Jr. noted, “For a man obsessed with monopoly control, the opportunity to also dominate food production must seem irresistible.” He continued:20

“His investment history suggests that the climate crisis, for Gates and his cronies, is no more than an alibi for intrusive social control, ‘Great Reset’-scale surveillance, and massive science fiction geoengineering boondoggles, including his demented and terrifying vanity projects to spray the stratosphere with calcium chloride or seawater to slow warming, to deploy giant balloons to saturate our atmosphere with reflective particles to blot out the sun, or his perilous gambit of releasing millions of genetically modified mosquitoes in South Florida.

When we place these nightmare schemes in context alongside the battery of experimental vaccines he forces on 161 million African children annually, it’s pretty clear that Gates regards us all as his lab rats.”

Zuzana Janosova-Den Boer experienced Communist rule in Czechoslovakia before moving to Canada. In her article, ”I Survived Communism — Are You Ready for Your Turn?” she detailed the “all-too familiar signs of the same propaganda” starting to permeate her adopted country.21

In relation to geoengineering, she points out that communism has been subverting the environmentalist movement since the 1970s, when then-chairman of the Communist Party USA, Gus Hall, published a book called “Ecology,” in which he stated:22

“Human society cannot basically stop the destruction of the environment under capitalism. Socialism is the only structure that makes it possible … We must be the organizers, the leaders of these movements.”

“This idea was incorporated into the U.S. Green Party program in 1989 (the same year soviet communism collapsed), in which the fictitious threats of ‘global warming’ and ‘climate change’ are used to scare the public into believing humanity must ‘save the planet’:

‘This urgency, along with other Green issues and themes it interrelates, makes confronting the greenhouse [effect] a powerful organizing tool … Survival is highly motivating, and may help us to build a mass movement that will lead to large-scale political and societal change in a very short time …

First of all, we [must] inform the public that the crisis is more immediate and severe than [they] are being told, [that] its implications are too great to wait for the universal scientific confirmation that only eco-catastrophe would establish.’”

The IPCC, Den Boer suggests, is promoting not climate science but socialist ideology, citing as evidence comments made by Ottmar Georg Edenhofer, former co-chair of the IPCC Working Group III, who in a 2010 interview stated that climate issues are about economics, and that:24

“We must free ourselves from the illusion that international climate policy is environmental policy … We must state clearly that we use climate policy de facto to redistribute the world’s wealth.”

Even without factoring in social control, the practical risks of geoengineering are impossible to ignore. It does nothing, for instance, to stop ocean acidification and rising carbon dioxide levels. And, if the chemicals used for “shading” the Earth are stopped for any reason, a “termination shock” is likely that would cause the planet to rapidly heat up, likely resulting in “massive death.”

It’s also unlikely that the cooling effect would be evenly distributed. While some of the planet would benefit, other parts could be negatively affected by droughts or flooding. The risks and the unknowns are immense in scale.

Even Christopher Field, chairman of the National Academy’s solar geoengineering committee, who said he supports further research into solar radiation management, told Yale Climate Connections, “If you can’t tell whether or not a bomb works until you set it off, that’s a really good reason to not build the bomb.”25″

Link To Send Message To Your Legislator To Ban Geoengineering, Weather Modification, and Cloud Seeding

Email: A4ZGinfo@aol.com if you’re interested in pushing for legislation in your State to end cloud seeding, weather modification and other geoengineering activities

Find out how to get your rain analyzed: