Do you remember?  September 11, 2001  America was recipient of a false flag incident collectively known as 9-11, “The Big Wedding,” or The New Pearl Harbor.

“Recall Donald Rumsfeld chose the date of September 10, 2001 to announce that a Pentagon audit, ordered by Undersecretary Dov Zakheim and conducted by a Halliburton subsidiary, had discovered that the Defense Department can no longer account for $2.3 trillion in past transactions. (Note: You are not hallucinating: two point three trillion dollars, or the equivalent of six annual Pentagon budgets.)

This matter was presented by CBS as a question of waste and incompetence, as though it were possible to lose $2.3 trillion under a couch somewhere. (It had earlier been covered on PBS in February 2001. Interestingly, the Bush Administration did not seek to place any blame on the Clinton administration for the missing assets, which should prompt questions about how much of the shortfall was invented in the course of the audit itself.)

One day after Rumsfeld’s admission of Sept. 10, this mother-of-all-scandals in the making disappeared from the corporate media’s vision. For good.”   Link 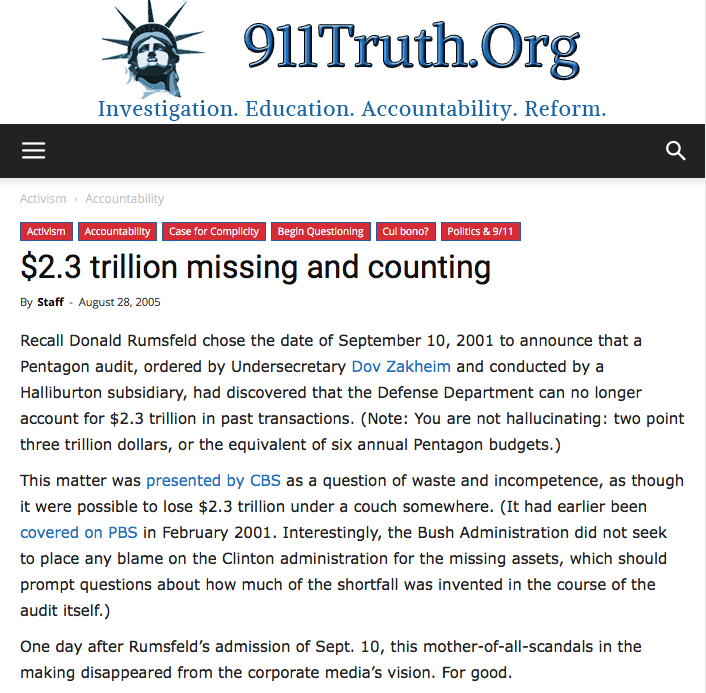