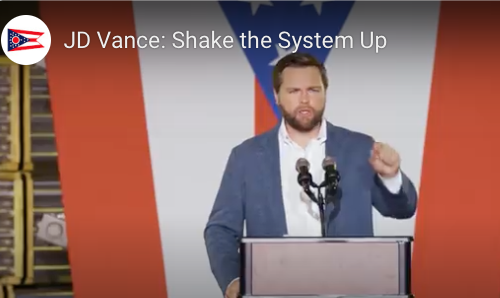 “No American citizen should ever be forcibly segregated by the government over their vaccine status.” JD Vance, candidate for U.S. Senate in Ohio, has one message in response to Joe Biden’s tyrannical vaccine mandate: #DoNotComply.  LINK

‘Only Mass Civil Disobedience Will Save Us’: JD Vance Shreds Biden’s Vaccine Mandate On American Businesses

Biden announced Thursday that the Labor Department is developing a new policy to require all private companies consisting of 100 plus employees to mandate COVID-19 vaccines or require weekly testing. Under the new regulation, private businesses that violate the rule could face thousands of dollars in fines per employee. (RELATED: FLASHBACK: Biden Said ‘I Wouldn’t Demand [Vaccines] To Be Mandatory)

“Joe Biden’s proposed covid mandates are not only illegal and unconstitutional, they’re morally reprehensible. While Joe Biden likes to talk about millions of American citizens as if they’re nothing more than vermin to be ruled by him and his friends, he’s revealed himself to be nothing more than a geriatric tyrant,” Vance said. “No American citizen should ever be forcibly segregated by the government over their vaccine status.”

“The Federal Government’s attempt to bully and coerce citizens into choosing between their livelihood and their own bodily autonomy must be resisted. I have a message for America’s business community: DO NOT COMPLY. Do not comply with the mandates. Do not pay the government fines. Don’t allow yourself to be bullied and controlled. Only mass civil disobedience will save us from Joe Biden’s naked authoritarianism.”