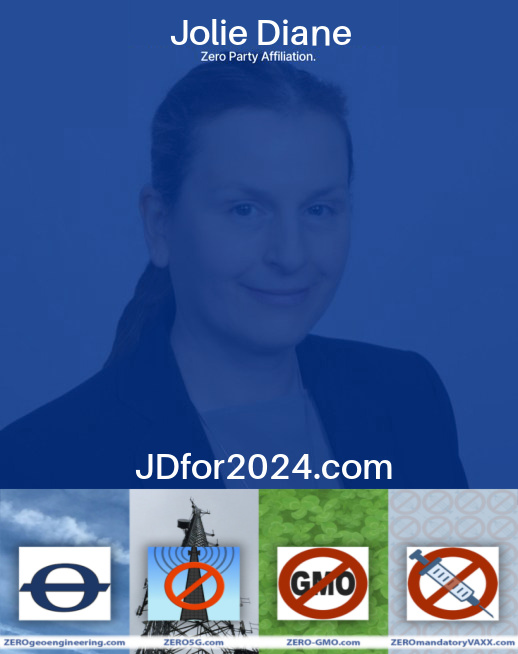 Dear Friends,
It’s me Jolie Diane. You may remember that I ran for President of the United States of America last election along with approximately 2,000 other candidates who did not subscribe to the official narrative of the corrupt duopoly of the Democrat/Republican crime syndicate.
Now, I don’t know about you, but I’m watching a slow motion train-wreck.  And with bittersweet emotion I am witnessing millions of people sadly waking up to the fact that decades of corruption and government lawlessness has led to the current state of affairs.
​
Specifically, Americans have been betrayed by trusted public servants in our councils of government.
I’m here to let you know that We The People have the opportunity and responsibility to restore our government peacefully and lawfully based upon freedom and sovereignty guaranteed by Constitutional authority. The U.S. government, currently acting on behalf of foreign corporations, in Maritime Law, is operating outside of the proper jurisdiction of the land and our lawful Constitution. [1]
Maritime law was devised for corporations not for The People.
It’s no wonder almost every bit of information being issued is contradictory, confusing and doesn’t make logical sense to the common person.
We the People are not machines, we have free will and free thought, creativity and the gift of empathy. Corporations by contrast are machines designed to enhance shareholder value. The board of directors at a corporation must make decisions based solely on financial terms. For the corporation, stock price on the open Stockmarket is literally the only thing that matters and gains in that regard are rewarded handsomely. Hence, the salaries of the CEO, CFO and Sales and Marketing Team. Unfortunately for us, Corporations hold “People” status and as many living men and women are aware the Corporate People working our system are by definition psychopaths.
Why are we allowing ourselves to be ruled under psychopathic corporate Maritime law?  When has it been OK for governors, corporate controlled alphabet agencies and even our own President to issue mandates about medicine? Not to mention experimental new forms of pharma-technology marketed as vaccines?
It is totally acceptable and normal to resist and refuse such outright corporate coersion.  And people should! Honestly, do not comply.
This is not the system of government we were promised. The US has been operating as a lawless corporation[2] instead of a lawful constitutional republic since 1871, not for the benefit of “saving Grandma and the Children” but for keeping the value of the US dollar up and empowering international central banks.
We the People must get the reigns back from this completely out of control situation.  I mean, Flint Michagan STILL does not have clean drinking water, yet the Democratic National Committee and the White House both have budgets of millions of  dollars each to promote the coronavirus19 experimental “vaccines”.
What Is Missing and Absolutely Essential?  I’ll tell you in my next communication. Until then, make time to smile and appreciate the moment. Get out in the sun and take deep breaths. Hug your friends and your family, even hug your pets.
Surround yourself with as many positive people as you can.  You got this because humans have the gift of empathy.
If someone makes you feel like the enemy as you rightfully refuse corporate coercion, stay away from that and just be you.  That’s what you were put here to be all along.
Until next time,
In Freedom

[2] THE UNITED STATES BECAME A FOREIGN CORPORATION IN 1871