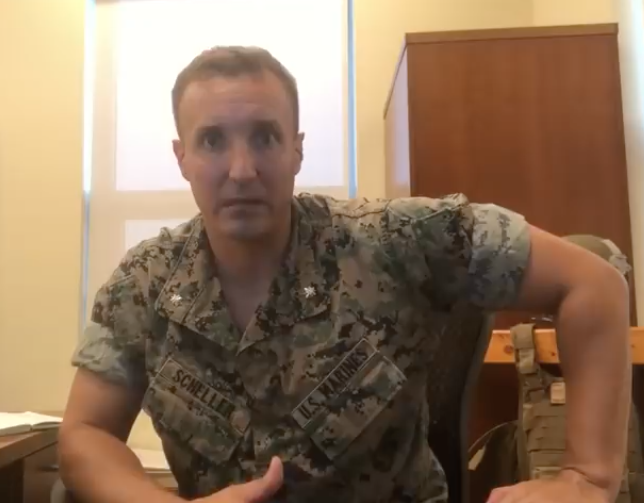 “All our son did is ask the questions that everybody was asking themselves, but they were too scared to speak out loud.”

“Lt. Col. Stuart Scheller, the Marine officer whose meteoric rise to internet fame began with a video criticizing military leadership over Afghanistan, is currently in the brig, his father told Task & Purpose.

“All our son did is ask the questions that everybody was asking themselves, but they were too scared to speak out loud,” said Stu Scheller Sr. “He was asking for accountability. In fact, I think he even asked for an apology that we made mistakes, but they couldn’t do that, which is mind-blowing.”

He said that his son is expected to appear before a military hearing on Thursday.

“They had a gag order on him and asked him not to speak,” the senior Scheller said. “He did, and they incarcerated him. They don’t know what to do with him.”

After this story was first published, the Marine Corps issued a statement confirming that Scheller has been sent to the brig.

“Lt. Col. Stuart Scheller Jr. is currently in pre-trial confinement in the Regional Brig for Marine Corps Installations East aboard Marine Corps Base Camp Lejeune pending an Article 32 preliminary hearing,” said Capt. Sam Stephenson, a spokesman for Training and Education Command. “The time, date, and location of the proceedings have not been determined.  Lt. Col. Scheller will be afforded all due process.”

(After publication the Marine Corps confirmed that Scheller is accused of the following offenses under the UCMJ: Article 88: Contempt toward officials, Article 90: Willfully disobeying superior commissioned officer, Article 92: Failure to obey an order, and Article 133: Conduct unbecoming an officer and a gentleman.)

Scheller first gained notoriety on Aug. 26, when he posted a video on Facebook and Linkedin criticizing the handling of the U.S. withdrawal from Afghanistan. In the video, Scheller accused senior military leaders of shirking their responsibilities, and questioned some of the command decisions that were made leading up to, and during, the final moments of America’s longest war.

“People are upset because their senior leaders let them down, and none of them are raising their hands and accepting accountability or saying, ‘We messed this up,’” Scheller said in the video.

Stu Scheller Sr. described his son as a proud American who loves the Marine Corps and has served proudly for the past 17 years.

“He’s asking for the same accountability that is expected of him and his men,” Scheller Sr. said.”

Democrat Senator On Biden Afghanistan Debacle: “No One Is in Charge”   LINK TO ARTICLE_Summit News

“Democratic Senator Richard Blumenthal blasted the Biden administration Tuesday over the botched US withdrawal from Afghanistan, urging that the chain of command has broken down.

During a Senate hearing Tuesday in which military generals claimed they advised against the timeline to pull out troops from the country, in contradiction to Joe Biden’s own statements, Blumenthal issued a scathing assessment.

Sen. Blumenthal on Americans stranded in Afghanistan: "We don't have an estimate on the number, because nobody is in charge right now." pic.twitter.com/1AH29fGu7S

The Senator focused on stranded Americans, noting that it was a “moral imperative” to get them out, yet the State Department passed the buck to the Department of Defense.

During a later MSNBC interview, Blumenthal repeated the comments, noting that Defense Secretary Lloyd Austin provided “no real responses,” because “there is nobody in charge.”

During the hearing, Commander of U.S. Central Command Gen. Kenneth McKenzie and Joint Chiefs of Staff Chairman Mark Milley both stated under oath that they objected to Biden’s withdrawal timeline, reasoning that the impending collapse of the Afghan government would cause chaos.

Lloyd Austin and McKenzie also claimed that Biden waited a full ten days after the Taliban took Kabul before he even asked for an assessment on the withdrawal deadline.

The claims directly contradict what Biden told reporters in August:

FLASHBACK: In August, Biden insisted that “no, no one” advised against his withdrawal timeline.

Today under oath, Generals Milley & McKenzie confirmed they recommended against Biden’s withdrawal timeline and warned him about the impending collapse of the Afghan government. pic.twitter.com/HejzUb5FIf