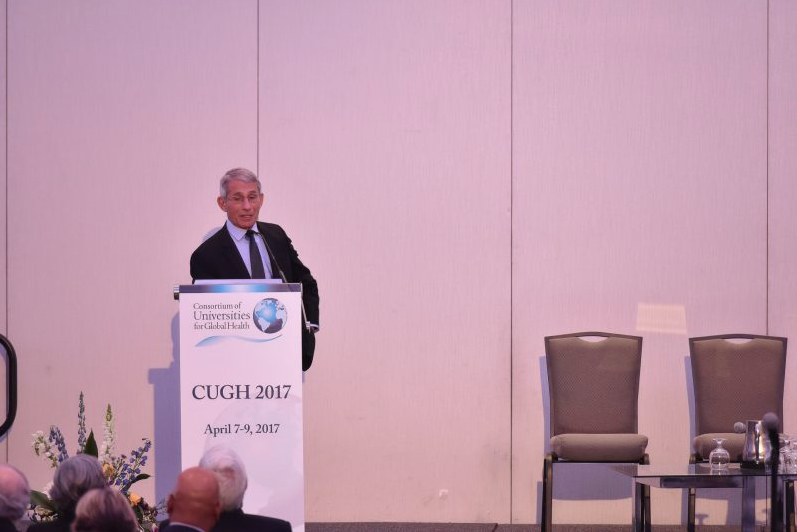 “It may seem too convenient to be true, but this event actually happened in 2017. The full video follows the article.”

“Speaking at the 2017 Consortium of Universities for Global Health conference on a panel alongside Anthony Fauci, EcoHealth Alliance President Peter Daszak admitted his controversial “work on coronaviruses in China” was carried out with “funding through” Fauci’s National Institutes of Health agency.

The unearthed conference follows Fauci’s repeated attempts to distance his agency from the controversial New York-based non-profit, which, as the National Institutes of Health (NIH) grant registry shows, used the money to collaborate with the Wuhan Institute of Virology.

The National Pulse has previously uncovered footage of Daszak describing the viruses he manipulated as part of his “longtime” collaboration with the Chinese Communist Party-run lab as “killers.”

The 2017 event, the “Healthy People, Healthy Ecosystems” conference hosted by the Consortium of Universities for Global Health (CUGH), took place in Washington, D.C. In its description of the conference, CUGH notes that the conference supports its vision for a “world without borders”:

“CUGH believes in a world without borders, because the desire for health and well-being is universal and doesn’t change based on race, ethnicity, national, socioeconomic status, sexual identity, or geographic location.”

The conference’s unearthed agenda reveals the attendance of EcoHealth President Peter Daszak, National Institute of Allergy and Infectious Diseases (NIAID) Director Anthony Fauci, and Principal Deputy Director of the Centers for Disease Control and Prevention (CDC) Anne Schuchat. The three individuals participated in a panel – “Future of Infectious Disease Pandemics: From Ebola to Zika, and Beyond” – where they discussed pandemic preparedness.

“Although much is known about how to detect and respond to existing infections, more research is needed to predict the likelihood of their emergence and spread, and to improve the precision and timeliness of public health responsiveness,” notes the panel description.

During Daszak’s presentation, given with an accompanying slideshow, he states his coronavirus work in China was carried out with “funding” from Fauci’s NIAID along with the United States Agency for International Development (USAID) Emerging Pandemic Threats (EPT) program:

“Working with the USAID EPT PREDICT Program and funding through NIAID to work on coronaviruses in China, we were able to test out this idea of predicting what the next emerging diseases might be. So we’ve all heard of SARS. We know that SARS is carried by civets. Well, actually, the host of SARS-like viruses, the viruses that the SARS coronavirus emerged from are bats.”

“We worked in China to go out and do surveillance in other bat species and say how many other SARS-like viruses are there. Is there something even close to SARS? And sure enough, there was,” he adds.

“We’re now doing surveillance of the people and we’ve found using NIAID funding that actually there is potential of spillover into those peoples,” he reiterates while outlining the global increase of human-animal interaction.

“A key lesson was that cover-ups are not worth it. You may recall the Minister of Health and the Mayor of Beijing were both removed during the SARS epidemic and that being transparent and open with your situation is a lot better.”

“Beijing did an incredible job of responding once the political level let them respond. They took over the healthcare system,” she adds.

Another panel at the event – “The Global Virome Project: A First Step Toward Ending the Pandemic Era” – featured Daszak and the Chief Scientific Officer of Metabiota, a pandemic tracking and response firm whose lead financial backer was a Hunter Biden-led investment group.

Biden served as Managing Director of Rosemont Seneca Technology Partners (RSTP), which led the company’s first round of funding worth $30 million.

The panel summary predicts that “over the coming century we will witness spillover from a pool of more than 1,000,000 “unknown” viruses into human populations”:

“The frequency of pandemics is increasing, driven by surging populations, environmental change and globalized trade and travel. Disease outbreaks illustrate that we are ill-prepared to mitigate the impact of a novel virus or prevent its emergence. Only a small proportion of viral threats have been identified. Over the coming century we will witness spillover from a pool of more than 1,000,000 “unknown” viruses into human populations. A global initiative to identify and characterize every significant viral threat circulating in the world is achievable over the next ten years – a critical and essential step towards ending the pandemic era.”

Both Daszak and Fauci have repeatedly lied about the type of research occurring at the Chinese Communist Party-run lab, as a host of Fauci’s emails obtained via the Freedom of Information Act (FOIA) reveal the facility was carrying out “gain-of-function” research and deleted articles reveal the lab worked with live bats despite Daszak stating otherwise.

Daszak, who failed to disclose his extensive ties to the Wuhan lab and the Chinese Communist Party, was recused from the Lancet medical journal’s COVID-19 commission yet still appears on mainstream news networks.

“The Defense Department doled out millions of dollars to the same nonprofit that funneled federal grant money to the Wuhan Institute of Virology for bat coronavirus research — with most of the Pentagon money going toward murky research on countering biological weapons.

New York City-based EcoHealth Alliance has already come under scrutiny for redirecting funds from the National Institutes of Health (NIH) to the Chinese lab, from where many believe COVID-19 leaked to set off the worst pandemic in a century.

But federal spending data shows that EcoHealth has a long and profitable relationship with the Pentagon, receiving $41.91 million in awards since fiscal year 2008. That’s more than three times the next-largest amount awarded to it by any other agency over the same period ($13.17 million from the Department of Health and Human Services).

Of the $41.91 million, $37.61 million was awarded to EcoHealth Alliance by the Defense Threat Reduction Agency (DTRA), which describes its mission as “to protect the United States and its allies by enabling the DoD and international partners to detect, deter, and defeat WMD and threat networks.” 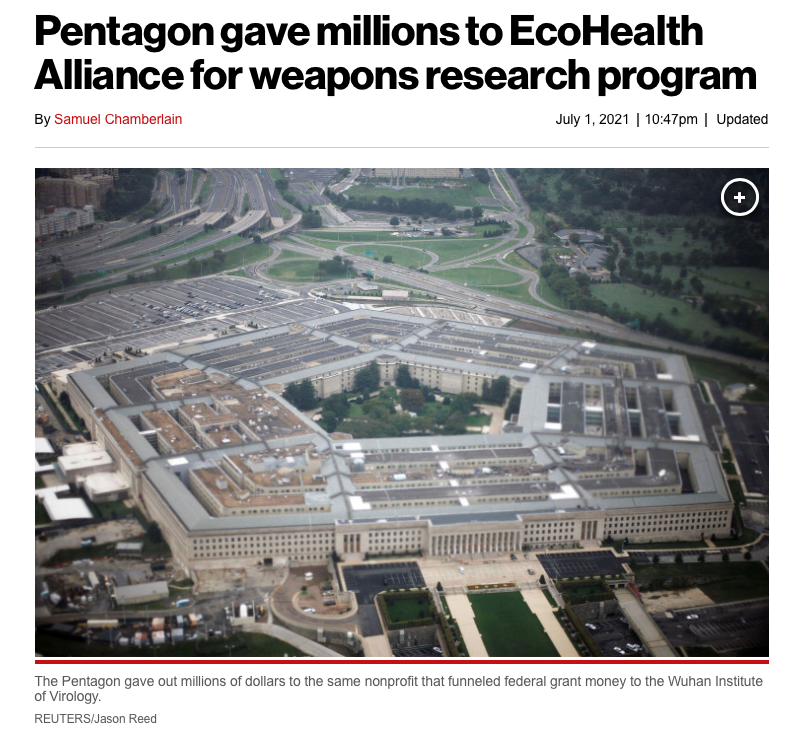