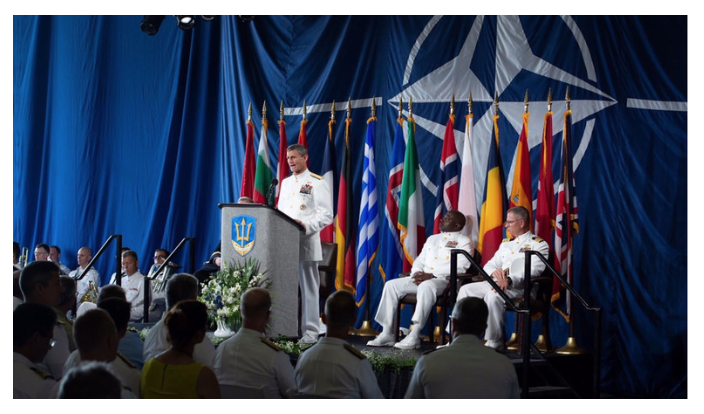 “US Sovereignty”: NATO Takes over Norfolk Naval Base

“Some Americans may be unaware that efforts to create a sovereign country in the New World began a century before our Founding Fathers fought a revolution to give form to that desire.

Without fully understanding its long term implications or its ultimate impact upon the entire planet, the American colonists knew instinctively, as if directed by divine guidance, that in order to free themselves from the strangling yoke of the British Empire, they had the right, the duty to establish their own country based on natural law, to define their own borders, to create their own laws and their own authority.

Little did those Founders of what became the greatest country in the world realize they had birthed the essential concept of national sovereignty as a self-governing ideal for an American Republic which would then become the motivation for many  countries around the world to emulate.

The rest, as they say, is history.

Fast forward two hundred years as US sovereignty is threatened today at multiple levels.  In what may be another chapter in the formation of a New World Government, the question remains how NATO asserted its omnipotent authority to establish a new Atlantic Command at the Norfolk Naval Base with the apparent acquiescence of the US military and Congressional leadership.

Once the largest naval port in the world, significant questions persist about how the Pentagon allowed this travesty against the Republic to occur with what appears to have been a black-out of national media attention, no Congressional scrutiny and no Trump Administration participation. I am still wrapping my mind around how easily the usurpation of an American military facility of such prominence could be so quietly accomplished with such finesse requiring so many accomplices.

Stepping back to May, 2017 newly elected President Donald Trump first met with NATO leaders in Brussels.  He wasted no time by questioning NATO’s relevance and asserting that “Twenty-three of the 28 nations are still not paying what they should be paying and what they’re supposed to be paying for their defense,” Trump said. “This is not fair to the people and the taxpayers of the United States.”

In January, 2018, seemingly out of the blue, the city of Norfolk  adopted an ordinance to accept a donation of three traffic signs.  Those signs acknowledged Norfolk as Home to the North American NATO Headquarters.   For some residents that may have come as a shock but city documents reveal that Norfolk has been ‘home’ to the only North American headquarters for the North Atlantic NATO since 1953.  By early 2018, NATO sought to ‘formalize’ the details with the donation and a letter of acceptance.

Yet it was not until six months later in June, 2018 that NATO’s North Atlantic Defense Ministers formally adopted the Alliance’s command structure to establish a new Atlantic Command in Norfolk as the only operational NATO Atlantic Command in North America.  As one of three regionally focused joint, operational-level commands, all Commands would report directly to the Supreme Allied Commander Europe.

In other words, what was once the US Navy’s largest and most sophisticated naval base in the world and on US soil would now be under the command of NATO.  Yet there is no real substantive background to know exactly how the United States agreed to relinquish its historic  naval claim on Norfolk.

As any engaged citizen might ask, where was President Donald Trump when all this was going on in 2018?

By July 2019, NATO’s newest operational command at Norfolk was created as part of the Alliance’s command structure adaptation and serves as the first NATO headquarters dedicated to the Atlantic Ocean since 2003.  Its assigned mission was to protect the Strategic Lines of Communication across all domains, protect sea-lanes between Europe and North America and enable the reinforcement of Europe, as necessary.

On September 17, 2020, six weeks before the 2020 Presidential election, Royal Navy Rear Admiral Andrew Betton, Deputy Commander of the Joint Force Command Norfolk and US Vice Admiral Andrew Lewis, Commander of the Command, cut the ribbon during the Initial Operational Capability ceremony at NATO’s New Norfolk Command Center.  Neither President Trump nor any representative from his Administration were in attendance.

On October 16, 2020, seventeen days before the 2020 election, the City of Norfolk unveiled a new sign at its arrival airport terminal which read “Welcome to Norfolk – NATO’s Home in North  America”. By that date, the US Navy’s base in Norfolk became known as home to both NATO-Allied Command Transformation (ACT) and the Joint Force Command Norfolk (JFC).   Hundreds of civilian and military personnel representing over 30 Member NATO countries had already relocated to Norfolk area.

On May 28, 2021, the North Atlantic Council approved the nomination of General Phillippe Lavigne, French Air and Space Force, as Supreme Allied Commander Transformation at the Norfolk base.

On June 4, 2021, NATO Chief Jens Stoltenberg called for more investment from members of the Alliance and adherence to NATO’s 2030 agendaissued in 2020 “making sure [that] NATO remains strong militarily, becomes even stronger politically and takes a ‘more global approach.”

On July 15, 2021, with little public fanfare or awareness, the Allied Joint Force Command Norfolk declared its NATO base at Norfolk to be at Full Operational Capability.  During a ceremony on board the USS Kearsarge which was largely a formality since NATO’s presence  achieved initialoperational capability in September, 2020 – less than two months prior to the 2020 Presidential election.

According to Vice Adm. Lewis who leads the US Second Fleet and the JFC Norfolk, its NATO mission is in response to increased Russian submarine activity in the Atlantic, increased military traffic including Chinese warships cruising the Aleutian Islands and an interest in securing the Atlantic Ocean’s sea-lanes between Europe and North America.

Also in attendance on the Kearsarge was Chair of the Joint Chiefs of Staff General Mark Milley, now revealed as an insurrectionist,  who gave a twenty minute dissertation during which he never once mentioned the word ‘peace.”  Obviously aware of the imminent NATO-Norfolk union, and as the President’s Chief military advisor, did General Milley ever inform President Trump of NATO’s move to Norfolk or that he would be attending the ceremony to celebrate NATO’s operational status at what was once the US Norfolk Naval Base.

As Milley described it,

Again, President Trump’s absence is noted and alarming, given that we now know of Milley’s penchant to assume decision-making which he has no authority to assume and without informing his Commander in Chief.   Or was Trump asleep at the wheel or the victim of his own flawed official appointments – too many of whom were less than loyal to their President?”