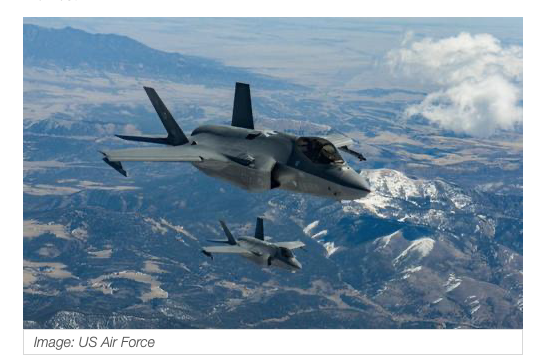 “The deadline is looming for US Air Force personnel to be fully vaccinated against COVID-19 and many thousands are still refusing, according to the latest reports. For many at this point, it’s also too late to receive both jabs by the next Tuesday, Nov. 2 deadline. Other branches like the Navy have deadlines coming later in November, but the Air Force will be the first test case as it set the earliest deadline.

The Washington Post is now at the end of the week reporting that up to 12,000 Air Force personnel are still declining the vaccine, causing alarm within the top chain of command who are worried it will impact force readiness, particularly as some forces in key positions face discharge over their vax refusal. “The fact that it’s a choice leading to potential loss to readiness is striking,” a military policy analyst with the Center for a New American Security Katherine L. Kuzminski, told the Post.

Short of full discharge, those refusing the mandate could be charged under the Uniform Code of Military Justice (UCMJ), based on prior Defense Department statements. Currently some class action lawsuits are said to be underway among troops – including reservists – who argue the mandate violations their individual medical freedom and Constitutional rights.

When it comes to the Air Force especially, there’s a risk of losing pilots and technicians – people in elite and highly skilled positions – who have undergone years of prior training at a government and taxpayer cost of millions of dollars. The Hillsummarizes the dilemma facing military top brass as follows:

However, with such a significant amount of service members rejecting the vaccine mandate, officials are faced with a dilemma — take action against those who rejected the mandate and possibly face serious setbacks within units that should be ready for a crisis, or go back on a wide-scale requirement established in August by the top military leaders.

If military leaders back down, it could set a precedent allowing personnel to more readily push back against future mandates – for example if a booster shot is ordered – something the Biden administration has signaled it may be prepared to do.

“The Air Force is the third-largest military service at 324,000 members, the Post noted. So even a small percentage of the ranks can be substantial,” The Hill summarizes further of the situation.

The US Navy is of similar size in terms of active duty members. The Navy and other branches are also at risk of seeing a mass exodus. Earlier this month a report in AFP underscored that “If all the services take the same hard line that the navy is taking, it risks losing as many as 46,000 troops, though presumably more will accept vaccinations before the deadline.” The Navy’s deadline is Nov.28 for all to be in full compliance.”

“There are about 19 million military veterans in the United States, and more and more are being added to that number every day as thousands of active duty military are refusing to comply with COVID vaccine mandates and being discharged.

A group of these veterans have banded together to produce some documentaries, and to issue a “National Security Alert.”

They claim to be non-partisan, and representative of all Americans regardless of ethnicity, religion, or political affiliation.

They have produced a 4.5 hour video documentary, and a shorter 38 minute one about “Preparing for War,” which I will embed here in this article from their channel. I have also uploaded a copy to the Health Impact News Bitchutechannel as well, for greater exposure.

Be forewarned that the language is graphic, as can be expected when a bunch of military vets get angry.

Here is the description of the video from their Rumble channel:”

The Biden administration is denying VA healthcare to all non-vaxxed veterans.

The tactical fascist vaxx purge of the U.S. military is now happening.

Make no mistake, it is the most devastating blow to military readiness in the history of the United States, and it is a blatant act of war against the American people.

Hundreds of thousands of newly discharged U.S. military service members, police, doctors and nurses are now joining forces with veterans to defend our country against this global fascist takeover attempt.

They are presently forming a decentralized asymmetric defense of our homeland.

Here’s a brief statement to give you a little taste of what is featured in this courageous and awe-inspiring video:

“This is the land of the free.

We will not allow forced injections, segregation or an authoritarian surveillance and control grid passport system.

We have sworn an oath to defend the Constitution of the United States against all enemies.

We will do everything in our power to keep the peace. We, the combat veterans and Special Forces veterans of America, know the horrors of war all too well.

We will be strategic, disciplined and surgical.

We know who the leading perpetrators are, and if they do not stand down, cease and desist, if they keep trying to oppress our people and enslave our nation, if they keep striping away our freedom and rights, those fascist enemy combatants will be held personally accountable.

Do you think we do not know what is going on?

You released a bio-weapon.

Then you systemically shutdown life-saving treatments leading to millions of unnecessary deaths.

Now you are injecting millions of people with a weaponized spike protein in an immune system degrading, gene-altering nanotech vax.

You have committed Crimes Against Humanity on a global scale.

Your power-addicted pathological shortsighted greed has destroyed our economy and severally inhibited people’s abilities to provide for their families.

You have rigged our political and economic system, burying people in inescapable debt.

You have captured and corrupted both of our political parties and the government agencies that are supposed to protect the civilian population from predatory global interests.

You have captured and corrupted our information and communication systems.

You are trying to cut off our ability to get healthcare and move freely throughout our communities.

You are contaminating our water supply and now you are systematically destroying our food supply, which you have been systemically poisoning for years as standard operating procedure.

Your long list of systemic abuses and usurpations amount to absolute Despotism.

Your wickedly evil corruption is now infecting all aspects of our lives.

We Have Had Enough!

The Line Has Been Drawn.

We represent every race, creed and ethnicity.

We know how you tactically deploy PSYOPS and stoke identity politics to silo off regional civilian populations into the smallest possible demographics to incite tribalism and make us fight amongst each other, while distracting us from being laser-focused on you, the head of the snake.

We have found common ground against you, our common enemy.

We all want to live in a free and healthy community that gives our children the opportunity to fulfill their potential.

We will defend our country, our communities and our families.

We will defend our homes from this fascist invasion.

Join our social network here, let us know what you are doing to defend your family: https://pogsof.com/

How will our military function once all these honorable service members are discharged?

The truth is the military needs these fine men and women more than they need the military.”