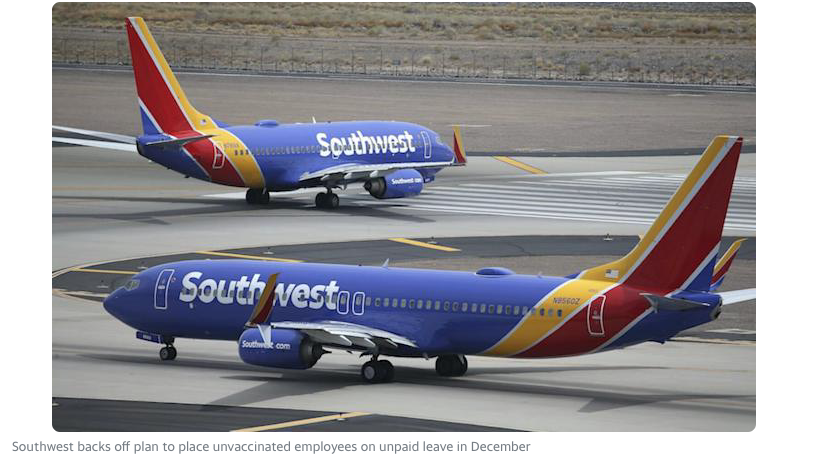 “Southwest Airlines has reversed course on a plan to put all unvaccinated staff on unpaid leave in early December.

The airline had previously said that all staff members who haven’t gotten vaccinated or received a medical or religious exemption by Dec. 8 would be placed on unpaid leave, a position that had been met with anger and protests from some employees. Labor unions for airline pilots have also expressed opposition to vaccine mandates.

Julie Weber, Southwest’s vice president and chief people officer, and Steve Goldberg, senior vice president of operations and hospitality, told employees that they can continue working after Dec. 8 if their exemption requests have still not been approved.

“This is a change from what was previously communicated. Initially, we communicated that these Employees would be put on unpaid leave and that is no longer the case,” the duo said in the internal communique , according to CNBC.”

“We’re getting it done, friends. Together, we delved into Title 7 and how to invoke your rights as contractors, teachers, employees, and federal workers this week. We also investigated some of the tactics corporations and employers were using to deny your religious exemptions by hiring lawyers to teach your HR representatives how to usurp the law. As horrific as this sounds, you were not deterred. Each and one of you took a hold of your circumstance, learned the laws and methods I teach, and stood for freedom as you educated your employer on your rights.

Last week we had a live class on my daily youtube show “Peggy to the Rescue” where thousands of Southwest Airlines employees tuned in as we reviewed the illegal measures imposed upon the exemption process. Line by line, we examined their unlawful demands and stipulations as we prepared our strategy and answers. We applied what we learned and took it to the line.

The outcome, is simply extraordinary. Together, we are turning the tides, my friends and I admire you and applaud you for your courage and tenacity. Your faith in God, your stance on freedom, and willingness to speak up is what shines a light in the darkness and it is the glimmer of hope for the world that is watching. What an incredible journey we are on!

We’re brining freedom back and I’m never going to stop! I know you won’t either. With that, my friends, I leave you with a testimonial from a wonderful Healthy American and SWA employee who shares updates on the turn of events from the inside!

Have a wonderful weekend everybody. See you next week.”

Dear Awesome Peggy !
I LOVE YOU. You are famous here at Southwest airlines and we all love you. You have done us all such a great service. We are all Angry and deflated. Even the pro Vax crowd is outraged at the mandate. Your video changed the companies position slightly. They softened there posture on the exemptions. Un paid leave has been removed! If the exemption is denied we can change it up and re submit it. Now if we miss the deadline we are still allowed to work until it’s approved. It is my understanding that you are responsible for that for us. I know of a handful of my co workers whose job you have saved. Prior to your video they were just going to go ahead and be terminated. The companies previous stance left them with no hope for an exemption, being so deflated they just threw in the towel and gave up.
If you ever need a friend. You have thousands over here .
God bless you!!!
SOUTHWEST AIRLINES MECHANIC