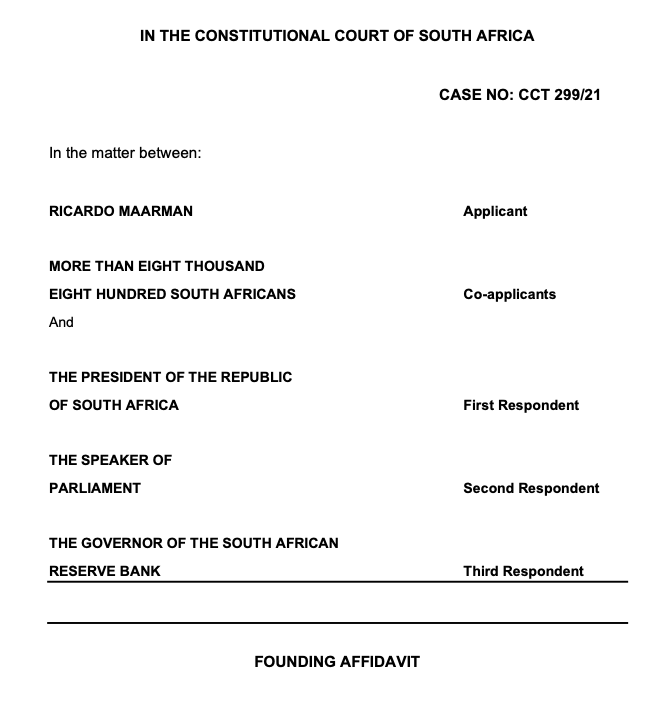 “Good Day, everyone. Today I have a very important message for the people of South Africa. We have filed our case with the Constitutional Court of South Africa, case number CCT 299/21.

Despite the many difficulties that we have faced along the way, we have successfully filed this case.

I would like to thank my wife for her loyal partnership, for her wavering commitment to the cause of truth, of justice and her service to God.

Finally, and most importantly, I would like to thank God in whom we put all our trust.

Now, what has the president done wrong? Why have we brought a case against him?

Well, the president heard claims made by the Chinese government that there was a virus that broke out in Wuhan. And subsequently, the World Health Organization has declared an international or global pandemic. He followed suit. He declared a national disaster in South Africa.

What the president should have done was to send scientists to China and to ask the Chinese government to provide a pure sample of the SARS-CoV-2 virus, separated and isolated from all other contaminants and substances. Once a scientist was in possession of this pure sample of the SARS-CoV-2, he should have instructed them to infect a living, healthy organism with this pure virus only to see whether it produces the symptoms of Covid-19 — and to see if Covid-19 is indeed as deadly as the Chinese and the World Health Organization claim it to be.

He should have repeated this a few times. After doing so, he should have presented his facts and his information to the people of South Africa, to Parliament. And then he should have declared a national state of disaster.

He also failed Section 52.1 of the Constitution that says if you take someone’s rights away then you should provide him information that could help him to understand why his rights have been taken away, or to fight for his rights to be restored. The president simply failed to do so.

What is the case that we have brought against the South African parliament?

Well, when the president declared the national state of disaster, Parliament went along without any question. That was wrong.

Parliament has failed the people of South Africa.

Before they provided such finance, what they should have done was to confirm whether the virus was real, confirm whether the virus was indeed deadly before they agreed to finance the government. They had a responsibility to do this under Section 224.2 of the Constitution. They have a responsibility to act independently without fear or favor. They have failed to do so.

Now we have great evidence against these responses.

The president and the scientists rely on the PCR test in order for them to demonstrate death rates and infection rates. But the inventor of the PCR test method they said that it shouldn’t be used for that. Yet they continue to use it for that.

The inventor of the PCR test method, Dr. Mullis [Kary Mullis, PhD], died shortly before the outbreak of the pandemic. But, luckily for us, that those who know him well, and who have the same expertise as him, have given a sworn testimony to verify and to confirm that he indeed has sent them that these tests should not be used for this. We have sworn testimony to this and we have presented this to the court.

The PCR test is not calibrated to find SARS-CoV-2 based on a pure genetic sample that was taken from a pure sample of the SARS-Cov-2 virus. Rather it is based on a computer-generated, genetic sequence.

The NICD [The National Institute for Communicable Diseases] has claimed that it had a photograph of the SARS-CoV-2 virus. Now how did they obtain this photograph?

According to their own version, found on their website, the NICD says that it took samples from patients that tested positive for SARS-CoV-2 using a PCR test. And then it took those samples and mixed it with green monkey kidney cells amongst other things. And then it took a picture of this mixture and claimed that this picture is a photograph of the SARS-CoV-2 virus.

Well, it is wrong. One cannot rely on such a picture because all you have is a picture of a mixture.

And this is exactly what the NICD has done in the supposed photograph. We placed this before the court and the court must consider this as per Section 39.1 of the Constitution.

This is overwhelming evidence that is supported by sworn testimony from scientific experts. Dr. Qureshi from Canada. Dr. […] from the United States, Dr. Corbett from the UK and, of course, the evidence that I have shown you from Christine Massey.

We thank them greatly for providing such sworn testimony to us. In addition to this sworn testimony, we also have incriminating evidence coming out of the mouths of the president, of the speaker of Parliament, and of the Reserve Bank governor themselves.

The president has admitted under oath at the Zondo commission, that his government has people or officials in high office that are captured. He admitted this.

He also said that members of Parliament from the African National Congress are in Parliament because of the party. And they are there to serve the party and represent the party, not the people of South Africa. This is out of his own mouth — sworn testimony.

Thandi Modise did not ask the president to show us the virus. And now Thandi Modise is the Minister of Defense.

He was working for the IMF and he was working with the South African government the same time — benefitting the IMF with this loan and it was eventually taken up. This was a clear conflict of interest. Highly unacceptable. How can we expect that the Reserve Bank would have acted independently without fear or favor in such circumstances, as it should have done, when its governor was so highly conflicted.

As you can see, we have a very, very strong case here against these respondents. And we are asking the court to grant the South African people relief.

And the relief that we are asking from the court is: Number one, for the national state of disaster and all its measures including the lockdown etc. to be declared invalid and to be set aside immediately.

We are asking the court that the Covid-19 budget, or the budget that was decided upon on the 24th of June 2020, in which the South African people incurred, indirectly, a good deal of debt, to fund the lockdown and the national disaster — that that budget must be declared invalid and set aside. And that the South African people must not be responsible for any debt incurred as a result of this unproven pandemic.

We are asking the Constitutional Court that all the respondents be held financially liable personally for all the financial losses suffered by South African people — because of their actions or their failures to act in the correct manner.

We are asking the court that the South African people be granted a referendum where they can decide whether to have a direct presidential election with individual candidates instead of party-based system that we have now, so that we can remedy this conflict of interest and this confusion that ANC party members have — whether they should represent the people or whether they should represent their party. We should have a referendum to solve this matter once and for all.

We are asking the court to grant the people a referendum so that the people can decide on a metal-based currency and the abolition of interest, to ensure that in future our financial system cannot be manipulated by anyone.

As you have seen here in my explanation for you, that our case is simple, clear and just.

We have faced many difficulties. Some of our witnesses that were supposed to give sworn testimony pulled out under threat, under coercion, under fear.

I ask all of you who are listening to this video that — should something happen to me — that all those co-applicants have the right to have this case continue to the end, until justice is done.