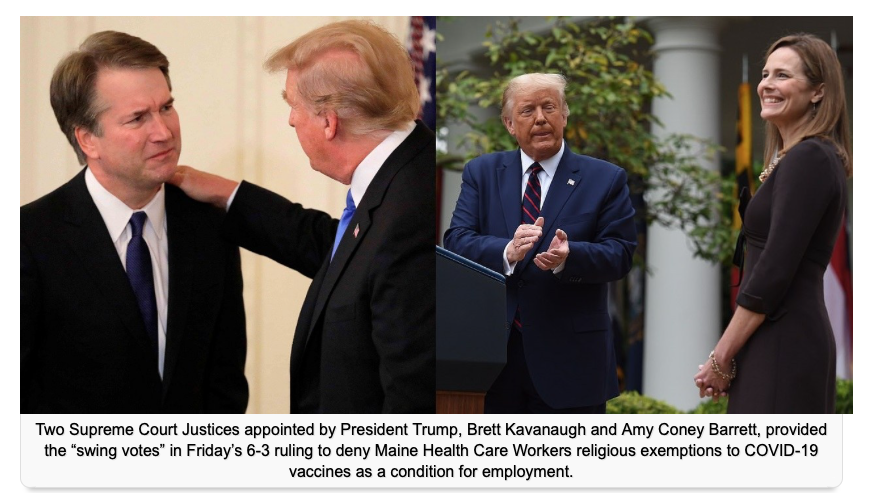 “For the first time this week, all 9 justices of the Supreme Court of the United States participated in an emergency hearing to stop COVID-19 vaccine mandates.

The case was a “religious exemption” case for Maine healthcare workers who were given until Friday, October 29, 2021 to comply with a COVID-19 vaccine mandate as a condition for employment.

The Right-wing Christian group, Liberty Counsel, represented about 2000 healthcare workers in Maine who claimed they were denied filing religious exemptions to the mandate, while medical exemptions were allowed.

Fetal tissue cells are used in the production of COVID-19 vaccines, and earlier this month Project Veritas published a video from a Pfizer employee whistleblower who claims that internal communication at Pfizer tried to hide this fact from the public, in an effort to reduce or eliminate religious exemption claims. See:

As a result, now thousands of healthcare workers in Maine face losing their jobs, and probably many more thousands, if not millions, nationwide.

Maine has adopted a new regulation requiring certain healthcare workers to receive COVID–19 vaccines if they wish to keep their jobs. Unlike comparable rules in most other States, Maine’s rule contains no exemption for those whose sincerely held religious  beliefs preclude them from accepting the vaccination.

The applicants before us are a physician who operates a medical practice and eight other healthcare workers. No one questions that these individuals have served patients on the front line of the COVID– 19 pandemic with bravery and grace for 18 months now. App. to Application for Injunctive Relief, Exh. 6, ¶8 (Complaint).

Yet,  with Maine’s new rule coming into effect, one of the applicants has already lost her job for refusing to betray her faith; another risks the imminent loss of his medical practice. The applicants ask us to enjoin further enforcement of Maine’s new rule as to them, at least until we can decide whether to accept their petition for certiorari. I would grant that relief.

Gorsuch also addressed the hypocrisy in allowing medical exemptions, but not religious exemptions:

Nor may any government blithely assume those claiming a medical exemption will be more willing to wear protective gear, submit to testing, or take other precautions than someone seeking a religious exemption.

He could have easily added that the vaccinated are at least as likely to spread COVID-19, if not more likely, based on available data.

He also addressed the hypocrisy of the State’s assertion that denying religious exemptions would “protect the State’s healthcare  infrastructure.”

That leaves Maine’s third asserted interest: protecting the State’s healthcare infrastructure. According to Maine, “[a]n outbreak  among healthcare workers requiring them to quarantine, or to be absent . . . as a result of illness caused by COVID–19, could  cripple the facility’s ability to Cite as: 595 U. S. ____ (2021) 5 provide care.” Shah Decl. 44, ¶56.

But as we have already seen, Maine does not dispute that unvaccinated religious objectors and unvaccinated medical objectors are equally at risk for  contracting COVID–19 or spreading it to their colleagues. Nor is it any answer to say that, if the State required vaccination for  medical objectors, they might suffer side effects resulting in fewer medical staff available to treat patients.

If the State refuses religious exemptions, religious workers will be fired for refusing to violate their faith, which will also mean fewer healthcare workers available to care for patients. (Full opinion here.)

This is now the fourth time the Supreme Court has refused to block a COVID-19 vaccine mandate via an emergency order, but it is the first one where all 9 justices were involved, and we can clearly see what the result was.

The facts and reasoning for this case, as written by Justice Gorsuch, are so simple and so basic, that the only explanation that can explain this denial of religious exemptions is that Corporate America, and not the judiciary, nor the presidency, nor Congress, are running the country now and calling the shots.

This has, of course, been going on for a very long time now, but this is so blatant and so arrogant, that it takes corruption in the United States to a whole new level.

The response to COVID-19, started by President Donald Trump and his Operation Warp Speed, has transferred $TRILLIONS to Big Pharma and Corporate America. They have never been so invested in something in the past that comes even close to comparing to the scale of the COVID-19 response and transfer of wealth they have received.

This IS the New World Order that we are watching unfold right before our eyes, and if you still think this is a “conspiracy theory” then you need to wake up, and wake up fast.

These world leaders that comprise this “Global Public-Private Partnership” that Iain Davis so eloquently exposed earlier this week, have made their intentions very clear, and they are so bold now that they could care less if a growing percentage of the public is waking up and is on to them now.

They truly believe that nothing can stop them now, and if the public does not arise in mass and start refusing their orders, they will be correct.

They control all aspects of U.S. Government now, including the CDC, FDA, NIH, and other federal agencies that determine health policies, and for those who do not follow their orders, they just get them into the courts and ultimately they will end up at the Supreme Court, which they obviously have firm control over.

The corporate Globalists running the United States, like the executives and investors behind Pfizer, need a divided public to accomplish their goals and prevent the public from acting in unison to oppose their takeover of this country.

They continue to do this through partisan politics, dividing the country as “republican” or “democrat,” “liberal” or “conservative,” etc.

What about the recent moves by some Red State Republican Governors who have issued executive orders, or perhaps even signed legislation, that seeks to prevent employers from mandating the COVID-19 shots as a condition for employment?

It makes for good rhetoric to keep the country divided, but as we clearly see now, ultimately it does not matter what they do or sign into law, because it will eventually make its way to the Supreme Court, and we know now how they will most likely rule on all similar cases involving vaccine mandates and exemptions.

I have previously stated that these Red State governors are wolves in sheep clothing, and I stand by that statement. See:

Not one of them took any action to protect the children in their state when the FDA and CDC gave approval to start injecting children between the ages of 12 and 15 with the experimental Pfizer shots last May. Many of these young people are now dead, or suffering from heart disease and lifelong disabilities, when they had an almost ZERO risk from dying from COVID-19.”