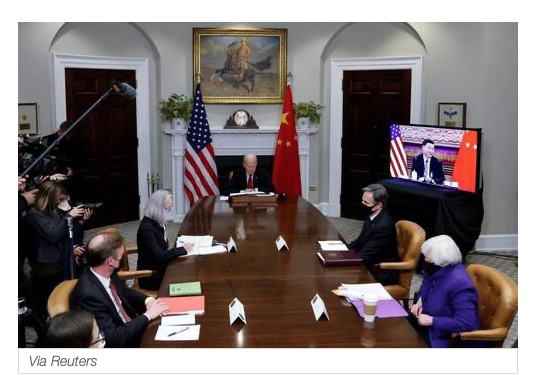 In light of orchestrated covid marketing campaigns of world nations, do The People need a healthy dose of skepticism?

Many have caught on to the covid pLandemic as being a well coordinated and highly politicized event designed to usher in one world government. (Masks, censorship, medical mandates, and segregation based on obedience to arbitrary and capricious government dictates, are some examples of weaponized totalitarian policies).

Why are Biden and Xi sitting between American and Chinese flags?  Perhaps to get the public used to the idea of merging these totally conflicting ideologies without questioning the calculated war on our population and the betrayal of The People and our constitutional republic.

Military tactics to intentionally deceive the population into accepting tyranny and communism by the skillful use of media propaganda meets the very definition of PSYOP (psychological operation) and the ongoing strategy of ideological subversion. Stay vigilant.  -JD

“Among the prime national security issues tackled in the three-and-a-half hour Monday evening Biden-Xi virtual summit were nuclear issues and cyberspace conflict, with FT reporting later on Tuesday afternoon that the US and Chinese leaders agreed to start talks over nuclear arsenals.

“The two leaders agreed that we would look to begin to carry forward discussions on strategic stability,” US national security adviser Jake Sullivan told a defense conference in Washington following the Biden-Xi meeting.

This is perhaps the first practical application and major breakthrough related to Biden’s call for each side to agree on “guardrails” that would ensure competition between the two largest economies and strongest militaries “does not veer into conflict”.” 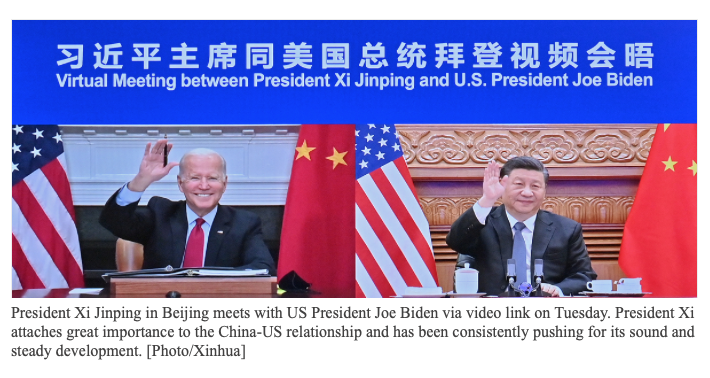 “Two sides should respect each other, pursue win-win cooperation, he says

President Xi Jinping set out priorities on Tuesday for relations between China and the United States for the new era, urging both sides to lead the international community in responding to key challenges and manage differences and sensitive issues in a constructive manner.

In his first virtual meeting with US President Joe Biden, Xi called upon the two nations to follow the principles of mutual respect, peaceful coexistence and win-win cooperation, highlighting the need to treat each other as equals, keep differences under control and seek common ground while putting aside their differences.

The meeting, which followed two phone calls between the two leaders in February and September, went on for three-and-a-half hours. The presidents had in-depth exchanges on issues of strategic, overarching and fundamental importance that shape the development of bilateral relations and on important issues of mutual interest.

The conversation opened on a friendly note from both leaders. Xi, who spoke with Biden from the East Hall of the Great Hall of the People, referred to the US president as “my old friend”.

Xi said he is willing to work with his US counterpart to build consensus and take active steps to move the relationship forward in a positive direction.”