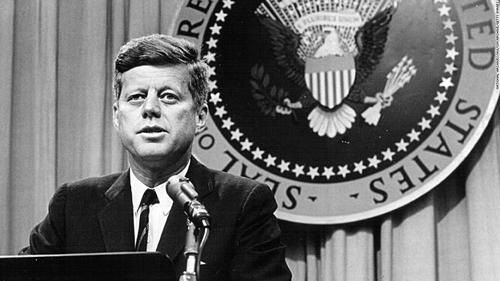 In Memory Of JFK: The First US President To Be Labeled A Terrorist & Threat To National Security

“In April 1954, Kennedy stood up on the Senate floor to challenge the Eisenhower Administration’s support for the doomed French imperial war in Vietnam, foreseeing that this would not be a short-lived war.

In July 1957, Kennedy once more took a strong stand against French colonialism, this time France’s bloody war against Algeria’s independence movement, which again found the Eisenhower Administration on the wrong side of history. Rising on the Senate floor, two days before America’s own Independence Day, Kennedy declared:

“The most powerful single force in the world today is neither communism nor capitalism, neither the H-bomb nor the guided missile – it is man’s eternal desire to be free and independent. The great enemy of that tremendous force of freedom is called, for want of a more precise term, imperialism – and today that means Soviet imperialism and, whether we like it or not, and though they are not to be equated, Western imperialism. Thus, the single most important test of American foreign policy today is how we meet the challenge of imperialism, what we do to further man’s desire to be free. On this test more than any other, this nation shall be critically judged by the uncommitted millions in Asia and Africa, and anxiously watched by the still hopeful lovers of freedom behind the Iron Curtain. If we fail to meet the challenge of either Soviet or Western imperialism, then no amount of foreign aid, no aggrandizement of armaments, no new pacts or doctrines or high-level conferences can prevent further setbacks to our course and to our security.”

In September 1960, the annual United Nations General Assembly was held in New York. Fidel Castro and a fifty-member delegation were among the attendees and had made a splash in the headlines when he decided to stay at the Hotel Theresa in Harlem after the midtown Shelburne Hotel demanded a $20,000 security deposit. He made an even bigger splash in the headlines when he made a speech at this hotel, discussing the issue of equality in the United States while in Harlem, one of the poorest boroughs in the country.

Kennedy would visit this very same hotel a short while later, and also made a speech:

“Behind the fact of Castro coming to this hotel, [and] Khrushchev…there is another great traveler in the world, and that is the travel of a world revolution, a world in turmoil…We should be glad [that Castro and Khrushchev] came to the United States. We should not fear the twentieth century, for the worldwide revolution which we see all around us is part of the original American Revolution.”

What did Kennedy mean by this? The American Revolution was fought for freedom, freedom from the rule of monarchy and imperialism in favour of national sovereignty. What Kennedy was stating, was that this was the very oppression that the rest of the world wished to shake the yoke off, and that the United States had an opportunity to be a leader in the cause for the independence of all nations.

On June 30th, 1960, marking the independence of the Republic of Congo from the colonial rule of Belgium, Patrice Lumumba, the first Congolese Prime Minister gave a speech that has become famous for its outspoken criticism of colonialism. Lumumba spoke of his people’s struggle against “the humiliating bondage that was forced upon us… [years that were] filled with tears, fire and blood,” and concluded vowing “We shall show the world what the black man can do when working in liberty, and we shall make the Congo the pride of Africa.”

Shortly after, Lumumba also made clear, “We want no part of the Cold War… We want Africa to remain African with a policy of neutralism.”

As a result, Lumumba was labeled a communist for his refusal to be a Cold War satellite for the western sphere. Rather, Lumumba was part of the Pan-African movement that was led by Ghanaian President Kwame Nkrumah (who later Kennedy would also work with), which sought national sovereignty and an end to colonialism in Africa.

Lumumba “would remain a grave danger,” Dulles said at an NSC meeting on September 21, 1960, “as long as he was not yet disposed of.” Three days later, Dulles made it clear that he wanted Lumumba permanently removed, cabling the CIA’s Leopoldville station, “We wish give [sic] every possible support in eliminating Lumumba from any possibility resuming governmental position.”

Lumumba was assassinated on Jan. 17th, 1961, just three days before Kennedy’s inauguration, during the fog of the transition period between presidents, when the CIA is most free to tie its loose ends, confident that they will not be reprimanded by a new administration that wants to avoid scandal on its first days in office.

Kennedy, who clearly meant to put a stop to the Murder Inc. that Dulles had created and was running, would declare to the world in his inaugural address on Jan. 20th, 1961, “The torch has been passed to a new generation of Americans.”

Along with inheriting the responsibility of the welfare of the country and its people, Kennedy was to also inherit a secret war with communist Cuba run by the CIA.

The Bay of Pigs set-up would occur three months later. Prouty compares the Bay of Pigs incident to that of the Crusade for Peace; the Bay of Pigs being orchestrated by the CIA, and the Crusade for Peace sabotaged by the CIA, in both cases to ruin the U.S. president’s (Eisenhower and Kennedy) ability to form a peaceful dialogue with Khrushchev and decrease Cold War tensions. Both presidents’ took onus for the events respectively, despite the responsibility resting with the CIA. However, Eisenhower and Kennedy understood, if they did not take onus, it would be a public declaration that they did not have any control over their government agencies and military.

Further, the Bay of Pigs operation was in fact meant to fail. It was meant to stir up a public outcry for a direct military invasion of Cuba.

On public record is a meeting (or more aptly described as an intervention) with CIA Deputy Director for Plans Richard Bissell, Joint Chiefs Chairman Lyman Lemnitzer, and Navy Chief Admiral Burke basically trying to strong-arm President Kennedy into approving a direct military attack on Cuba. Admiral Burke had already taken the liberty of positioning two battalions of Marines on Navy destroyers off the coast of Cuba “anticipating that U.S. forces might be ordered into Cuba to salvage a botched invasion.”[7] (This incident is what inspired the Frankenheimer movie “Seven Days in May.”)

“They were sure I’d give in to them,” Kennedy later told Special Assistant to the President Dave Powers.

“They couldn’t believe that a new president like me wouldn’t panic and try to save his own face. Well they had me figured all wrong.”

Incredibly, not only did the young president stand his ground against the Washington war hawks just three months into his presidential term, but he also launched the Cuba Study Group which found the CIA to be responsible for the fiasco, leading to the humiliating forced resignation of Allen Dulles, Richard Bissell and Charles Cabell. (For more on this refer to my report.)

Unfortunately, it would not be that easy to dethrone Dulles, who continued to act as head of the CIA, and key members of the intelligence community such as Helms and Angleton regularly bypassed McCone (the new CIA Director) and briefed Dulles directly.

But Kennedy was also serious about seeing it through all the way, and vowed to “splinter the CIA into a thousand pieces and scatter it to the winds.”