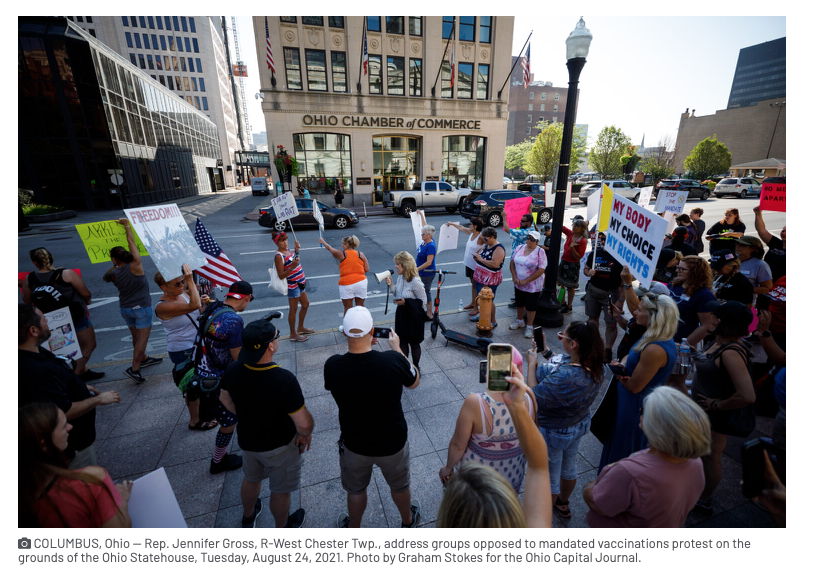 The legislation also extends a broad immunity for people and businesses against lawsuits alleging they negligently spread COVID-19. It passed with a nearly party line, 58-32 vote.

Republicans passed the bill over objections from the public health, private health care, manufacturing and general business associations who have all voiced opposition to any kind of vaccine mandate ban for months. With House passage, it now heads to the Ohio Senate for consideration.

Lawmakers first unveiled the bill just after 9 a.m. Thursday. It still technically allows schools, colleges, and employers to require vaccination from students and employees. However, it requires them to accept a broad enough range of exemptions as to dilute mandates into suggestions. The exemptions include:

The exemptions would not be available to people who work in intensive care units of hospitals or children’s hospitals. However, those employers or schools would still need to make a “good faith effort” to provide equitable instruction or employment for those who abstain from vaccination.

Rep. Al Cutrona, R-Canfield, framed the bill as a protection of personal autonomy. He criticized the “radical left” and “special interest groups” who opposed the bill. When asked about Ohio’s status as the 10th least vaccinated state in the U.S., he said the legislation will improve the health care system by preventing workers from quitting over vaccine mandates.

“I think this will make our state better in the sense of our health care system,” he said. “If we don’t have the necessary nurses to be able to treat and provide that good standard of care, how can we provide that for them if they’re walking off the job.”