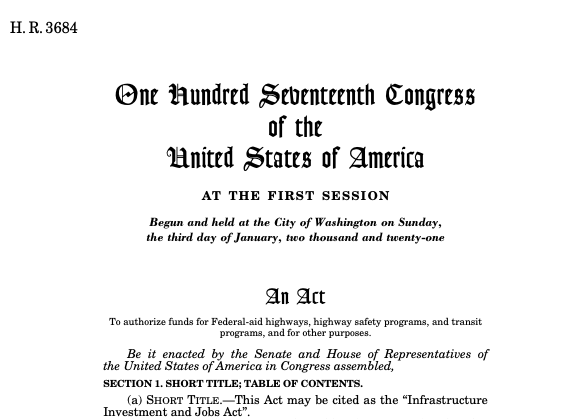 What’s in that infrastructure bill?

“That subhead is no joke. Watch this video (tuning out, if you prefer, those two unnecessary giggler-commentators). The Speaker of the House is incoherent, evidently plastered (as Biden’s second-in-command appears to be much of the time).

“But — far more important — what’s in that bill?

Read between the lines of this interview from the World Economic Forum, and you’ll see that this trillion-dollar boondoggle is, among other things, congressional preparation for the UN’s Agenda 2030.

Squeezing We the People from the country, and the suburbs, into huge “smart cities,” with 5G uniting your “devices” and appliances (against you), robot-dogs and other faceless AI goons relentlessly “protecting” you (having now replaced those “white supremacist” police), and icky cars phased out in favor of mass transit (for which you’ll certainly need “proof of vaccination,” though it will save you lots of “carbon credits,” as you take it to and from your deadly job, if any).

Under the provisions of this bill, moreover, new cars (many-if-not-most of them electric) will be equipped with highly sensitive surveillance systems, which “will track the driver’s eye mo[ve]ment and monitor signs of being distracted, impaired, or tired.”

Imagine yourself “tired” out by your wife’s long labor (assuming that they let you try to procreate, and her conceive), so when her waters break, and you try to drive her to the hospital, the car won’t let you start it.

And if you actually have had a few too many (even one may be too many), and maybe lose it, and curse out the car for its refusal to perform like one, it will report you, on “the internet of things,” for “hate speech,” and then “the cops” will get involved, to test your breath, and check your pulse, and scan your eyes, and tase you if you disrespect the law.

All of this, no doubt, is just the least of it. Further thoughts or observations always welcome.”

Mark Crispin Miller is Professor of Media, Culture and Communication at New York University and the author of several books, including Boxed In: The Culture of TV; Seeing Through Movies; Mad Scientists: The Secret History of Modern Propaganda; Spectacle: Operation Desert Storm and the Triumph of Illusion; and The Bush Dyslexicon. You can read more of his work through his newsletter, News from the Underground