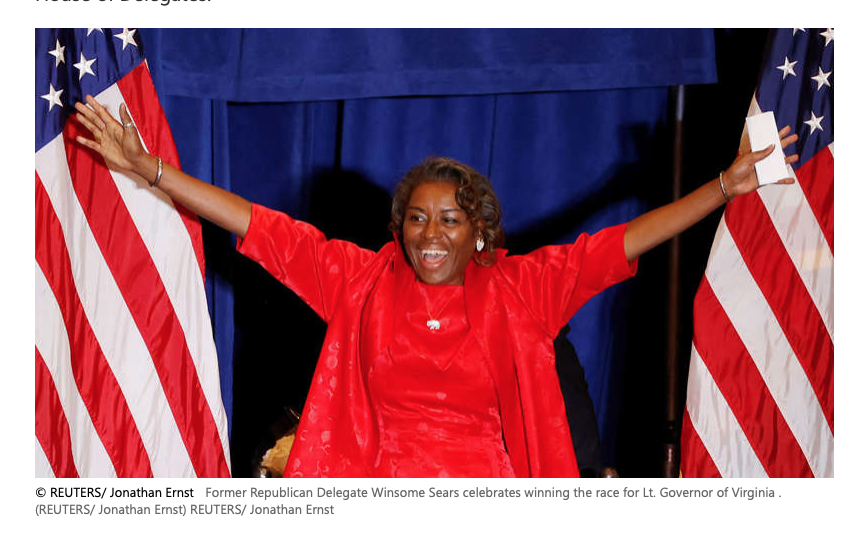 Wow! She’s amazing. No wonder the media suppressed coverage of her.

“Last night, projected winner Winsome Sears said, “I didn’t run to make history, I just wanted to leave it better than I found it.” Yet, her victory was historical. She’s the first African-American female to win the office of Lieutenant Governor in Virginia. She’s also the first female veteran, and she’s the first naturalized citizen to do so. She’s also a Republican.

So, who is Winsome Sears, and why did she garner the vote in a state that Joe Biden won by ten points in the 2020 election?

Winsome Sears is not someone new to politics. She has served as the Vice President of the Virginia State Board of Education. She’s received presidential appointments to the United States Census Bureau. While a part of the Census Bureau, she served as co-chair of the African-American Committee. She’s been on the Advisory Committee to the Secretary of Veterans Affairs. In 2001, she was elected to the Virginia House of Delegates.

Winsome was born in Kingston, Jamaica. Her family moved to the United States when she was six, settling in the Bronx, New York. Her father worked at most any job he could find. He did this while attending college himself. His dedication influenced Winsome; she received a degree in English (with a minor in economics) from Old Dominion University. She would earn a Master’s degree in organizational leadership from Regent University. During her time in the Marines, she worked as an electrician.

Winsome is a wife and mother, too. She is an entrepreneur as well, building a successful small business with her electrician training. She also makes working in the community a priority. She leads a men’s prison ministry and has volunteered as a director of a women’s homeless shelter in conjunction with the Salvation Army.

Now, Winsome can add defeating Democratic challenger Hala Ayala for the Virginia Lt. Governor to her list of accomplishments.

As the projections of her election were announced, Sears said, “What you are looking at is the American Dream.” She says that she had not yet become a naturalized citizen when she joined the Marines, but, she believed in this country so much that she “would have died for it.”