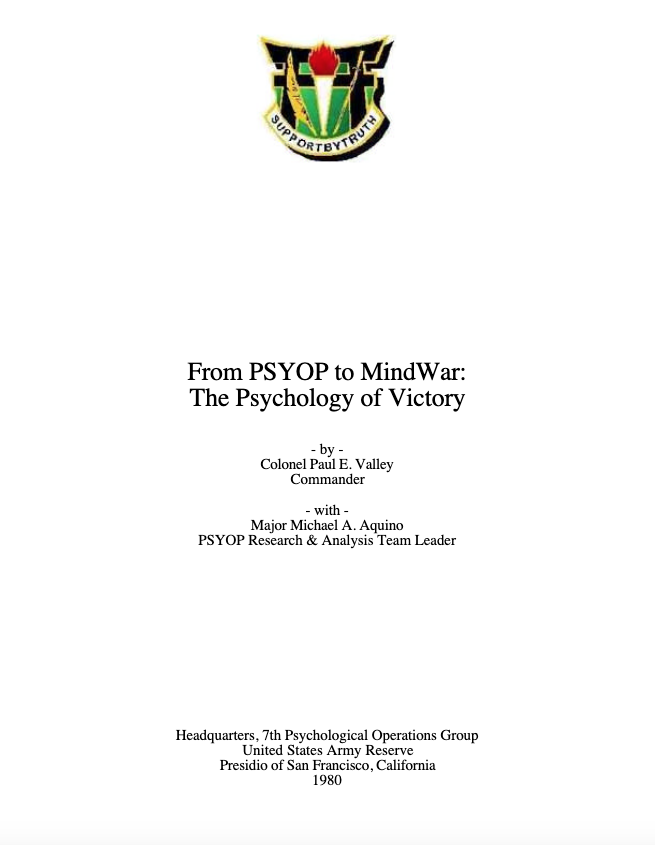 Good and decent people would never imagine that they are currently victims of mind control weapons, silently deployed worldwide over decades, by globalist corporations, corrupt politicians, and compromised military “leadership”.  Eisenhower warned of the military-[intelligence-pharmaceutical-media]-industrial-complex during his farewell address in 1961. The out-of-control CIA and other rogue alphabet agencies have enjoyed a blank check and total immunity from horrific crimes against humanity for far too long.

Recognizing the hardware of the mindwar hidden in plain sight, reigning in the wireless [MICROWAVE RADIATION] grid (4G-5G-6G+AI), and knowing the architects of these totalitarian control systems to be criminals, society can put an end to the mindwar and reclaim our health, freedom and sovereignty.  One of the original creators of the mindwar weapons that are violently attacking all life on the Earth, is the now deceased pedophile and war criminal, Michael Aquino.

“Well, then there was a man by the name of Michael Aquino. He was in the military. He had top Pentagon clearances. He was a pedophile. He was a Satanist. He’s founded the Temple of Set. And he was a close friend of Anton LaVey. The two of them were very active in ritualistic sexual abuse. And they deferred funding from this government program to use [in] this experimentation on children…”

2003 | From PSYOP to MindWar: The Psychology of Victory | by Colonel Paul E. Valley and Michael A. Aquino Lt. Colonel  |

“The advantage of MindWar is that it conducts wars in nonlethal, noninjurious, and nondestructive ways. Essentially you overwhelm your enemy with argument. You seize control of all of the means by which his government and populace process information to make up their minds, and you adjust it so that those minds are made up as you desire. Everyone is happy, no one gets hurt or killed, and nothing is destroyed.” -p.3 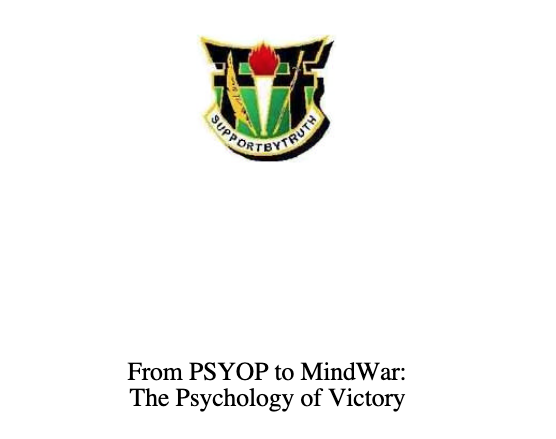 “ELF-waves are not normally noticed by the unaided senses, yet their resonant effect upon the human body has been connected to both physiological disorders and emotional distortion. Infrasound vibration (up to 20 Hz) can subliminally influence brain activity to align itself to delta, theta, alpha, or beta wave patterns, inclining an audience toward everything from alertness to passivity. Infrasound could be used tactically, as ELF-waves endure for great distances; and it could be used in conjunction with media broadcasts as well.”  -p.10

“* In November 1986, the San Francisco Police Department (SFPD), the Federal Bureau of Investigation (FBI) and the U.S. Army Criminal Investigation Division Command (CID) began investigating charges that Gary Hambright had sexually molested several of the children entrusted to his care as an employee at the Child Development Center on the Army base known as the Presidio. On August 12, 1987, Army Captain Larry Adams-Thompson reported to the authorities that his three-year-old daughter, who had attended the Child Development Center during the period of Hambright’s alleged crimes, had become visibly frightened upon seeing LTC Aquino and his wife at the Army’s post-exchange that day and called them “Mikey” and “Shamby.” In a subsequent interview by an FBI agent, the girl implicated “Mikey,” “Shamby” and “Mr. Gary” in the sexual molestation of her and other children at “Mr. Gary’s house.” The investigation of Hambright was expanded to include Aquino and his wife.”     Link 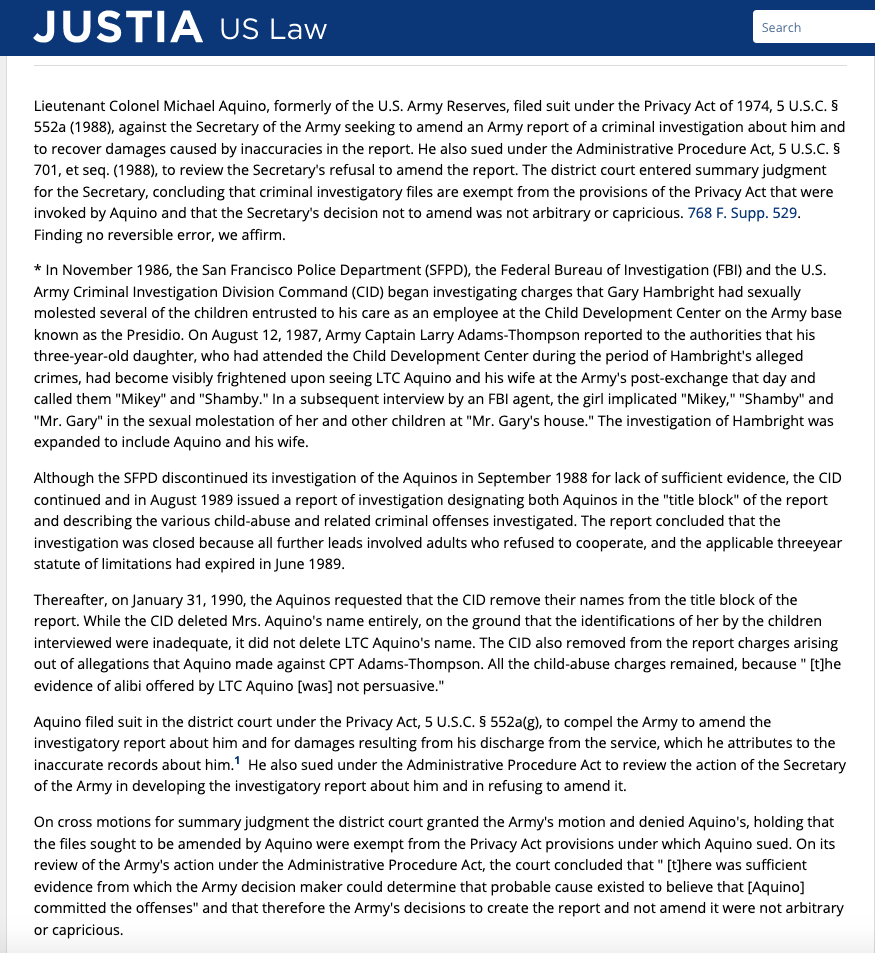 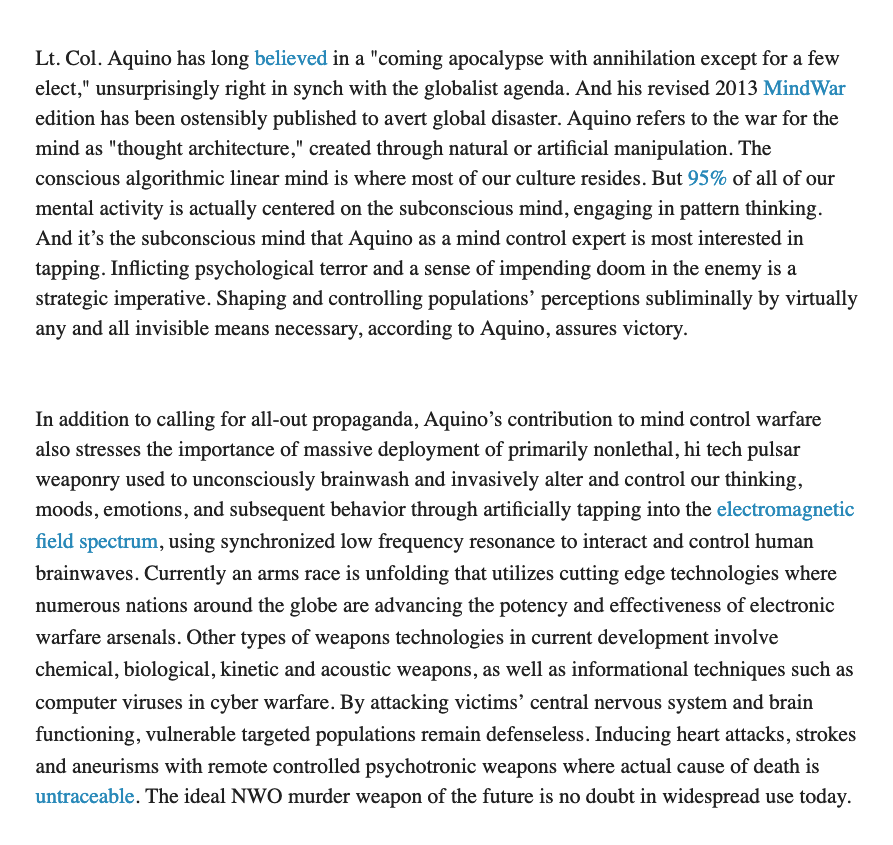