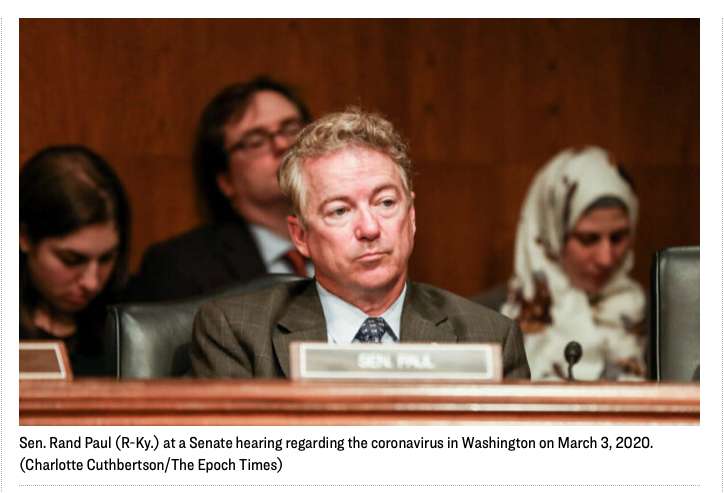 “Sen. Rand Paul (R-Ky.) has unveiled his annual “Festivus Report,” which tracks what he sees as “waste” spending by the federal government. According to the libertarian-leaning Kentuckian, that waste topped over $52 billion in 2021.

Since arriving in the Senate amid the Tea Party wave of 2010, Paul had made the federal budget one of his foremost concerns.

Like his father, 2008 and 2012 presidential candidate and former U.S. Rep. Ron Paul (R-Texas), the younger Paul has decried U.S. military adventurism, the excesses of the post-9/11 surveillance state, and the perpetually unbalanced budget of the federal government.

The Festivus Report has been a staple for Paul since 2015, when he released his first edition of the report.

In the 2021 report, Paul calculated that federal boondoggles added up to a total of $52,598,515,585—an amount Paul says could have been used to give everyone on Earth around $6.78, build 13,149 miles of four-lane highway, operate Veterans’ Affairs facilities for 4.5 months, or to fund the Department of Energy for nearly two years.

From ground-up ferrets to border walls for Middle Eastern countries to a federally-funded dinosaur film, these are some of the most striking examples of bizarre spending revealed by Paul.

Since January 2020, the U.S. government has spent more on relief packages for the CCP (Chinese Communist Party) virus than it spent on World War II. And these relief packages have cost taxpayers tens billions in waste and misappropriated funds, Paul argues.

By far the largest expense listed was a $36 billion loss to “improper CARES Act unemployment payments.” The CARES Act, signed into law in March 2020, was the first major pandemic stimulus bill.

At the time, when uncertainty about the disease was at its peak, the bill expanded eligibility opportunities for unemployment, allowing those who normally would not qualify to receive unemployment payments.

Though it has since become clear that most healthy adults under 50 years old are at little risk of severe disease, federal expenditures authorized by the CARES Act have lagged behind the science.

While employers across the nation are desperate for more employees, many not-at-risk Americans have continued to collect unemployment checks under CARES Act guidelines despite being able to work at workplaces enforcing their own COVID-19 safety measures.

The second largest expense detailed by Paul was also the result of COVID stimulus legislation.

The next largest expenses come from the Department of Defense (DoD).

According to Paul, the DoD has invested $3.4 billion into replacing the Bradley Fighting Vehicle, one of the military’s go-to tank-like assault vehicles that are used in part as troop transports. Efforts to replace the Bradley began in 2003, but the DoD has still not managed to build a viable replacement.

The DoD also lost quite a bit of taxpayer money during the chaotic and controversial withdrawal from Afghanistan.

Ordered to leave immediately by President Joe Biden, the military left behind not only hundreds of American citizens and billions of dollars in military equipment, but also billions of dollars of U.S.-financed infrastructure and buildings. The evacuation has left around $2.4 billion of buildings sitting unused.

“Why are we spending all this money to build them in the first place?” Paul wrote. “What was once a mission to seek out and destroy the people who perpetrated the 9/11 attacks has become an exercise in—well, it’s unclear exactly what.”

Additionally, $549 million was spent by the DoD on military aircraft for the faraway desert nation, but these were “later thrown away” and sold as scrap for $40,257, Paul found.

“DoD is responsible for billing and tracking countries’ usage of these goods and services,” Paul said of the discovery, noting that these aircraft were not supposed to be offered for free. “However, DoD apparently forgot about that part,” Paul quipped.”