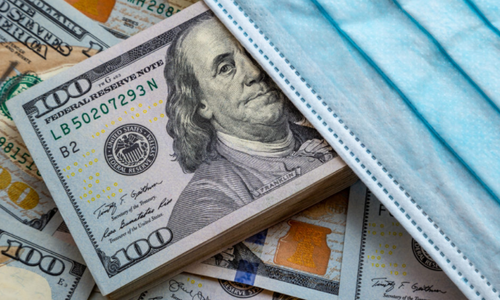 “When it comes to government waste, we’ve seen some pretty big numbers of recent – including $80 billion worth of military equipment that was left behind in Afghanistan just months ago.

But trumping that number, according to the Secret Service, is more than $100 billion that was stolen from pandemic relief funds. The $100 billion figure is “at a minimum,” a new report from AP says.

The estimate is based on “Secret Service cases and data from the Labor Department and the Small Business Administration,” the report says.

“The sheer size of the [$3.4 trillion dispersed] is enticing to the criminals”, said Roy Dotson, the agency’s national pandemic fraud recovery coordinator.

A majority of the figure comes from unemployment fraud, the report notes. About $87 billion in benefits may have been paid out improperly, The Labor Department says.

So far, the Secret Service has seized over $1.2 billion while investigating unemployment insurance and loan fraud. It has returned more than $2.3 billion in fraudulently obtained funds and has more than 900 active criminal investigations into pandemic fraud.

100 people have been arrested as a result of their investigations so far, the report notes.

Meanwhile the DOJ has seized more than $75 million in cash from improper PPP loans, it continues.

Dotson concluded, telling AP: “Can we stop fraud? Will we? No, but I think we can definitely prosecute those that need to be prosecuted and we can do our best to recover as much fraudulent pandemic funds that we can.”