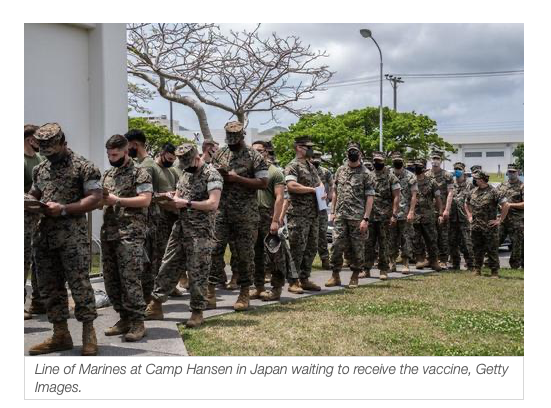 The unconstitutional DoD mandate that soldier’s are forced to get experimental c0v|d injections illustrates the deliberate, self inflicted wounding of the USA military by those holding positions of leadership.  Who benefits by potentially weakening or removing USA’s best trained warriors? This self defeating policy is unacceptable.  -JD

“Days ago it was first revealed that despite the Department of Defense offering a “religious exemption” as part of the Covid-19 vaccine mandate across all military branches, not a single one has yet to be approved – at a time at least 169 Marines were already discharged for their refusal to receive the shot.

A new investigative report by Fox News finds that multiple “thousands” of Marines are still set to be processed out over the mandate, and that the corps’ “best and brightest” are being “crushed” by the Biden vaccine order. “Marines are allowed to apply for a religious exemption, but so far not a single application regarding the COVID-19 vaccine, or any vaccine for that matter, has been approved, a Marine Corps spokesman told Fox News.”

For this reason the mandate is being likened to a “political purge” – which has seen a “blanket denial” of all formal requests for religious exemptions. In recent days official Marine Corps statements have underscored no exemptions are being given out, yet supposedly these are being considered on a case by case basis.

As of late last week, the Marine Corps confirmed that not a single religious exemption request has yet to be approved. It was further confirmed that at least a few thousand could be discharged based on the exemption denial:

So assuming these Marines will still refuse the jab, thousands are set to be booted from the Marine Corps. In its reporting, Fox extensively quotes Marine officers, whose names are withheld. The Daily Wire, citing the most recently available public data from last week, estimated that some 9,000 could still be set for early discharge from the service:

As of Thursday, 94% of active-duty troops were fully vaccinated and another 1% were partially vaccinated, according to data from the U.S. Marine Corps.

“There’s something fundamentally wrong at this point with our nation’s leadership,” a major with over 17 years of active service was cited as saying. “We are facing an unconstitutional edict that I think is very targeted as a political purge, taking out some of the best and brightest soldiers, sailors, airmen, Marines and guardians from the Space Force.”

Further, a lieutenant colonel who has served for almost two decades said the Marines are discharging service members “as fast as they can and as brutally as they can, damaging every Marine as much as they can on the way out.”

“The one message I got from the colonel above me was: ‘Tread very carefully, this is political, you will be crushed like an ant.’ And he told me that because he cares about me,” the lieutenant colonel said. “Do I want to continue serving in an institution that crushes people for bringing up reasonable points in defending their faith?”

One master sergeant said it seems that “the louder I speak the tighter the screws are turned against me.”

Additionally one Marine who ranks high on the enlisted side said, “When you’re expected to behave a certain way and to obey certain rules and follow certain processes, and then to see on the other end that that’s not a two-way street, that’s a violation of my morals that I can’t stand by and not speak out about.”