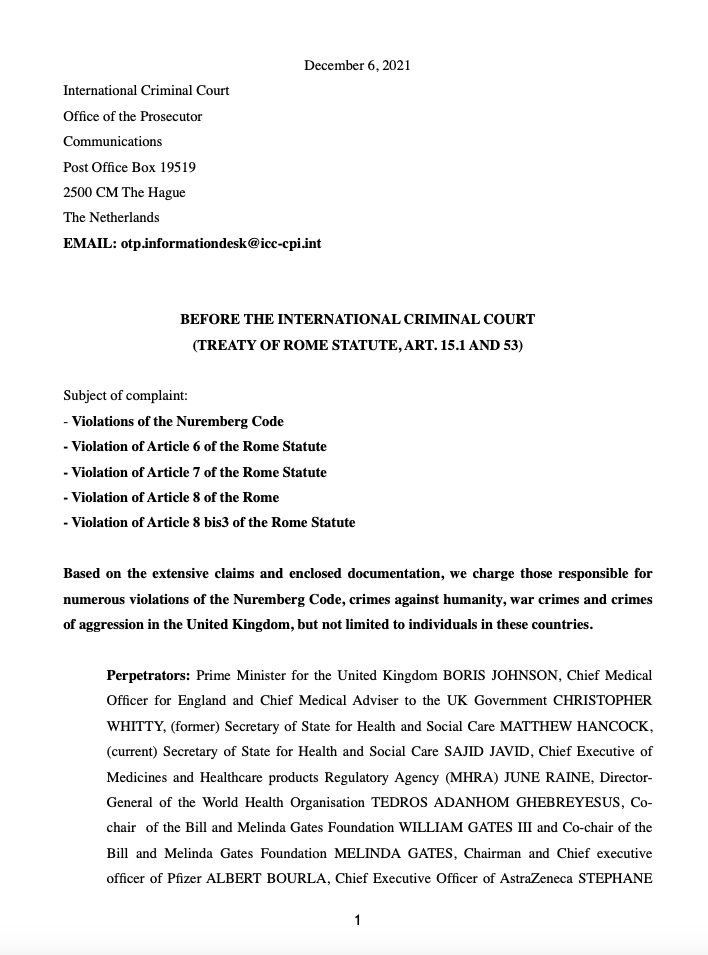 “A complaint has been filed with the Prosecutor of the International Criminal Court on December 6th, 2021 by a team from the UK on behalf of the people. They are alleging crimes committed by UK government officials and international world leaders of various violations of the Nuremberg Code, crimes against humanity, war crimes and crimes of aggression perpetrated against the peoples of the UK.

The team who are fighting for justice on behalf of us all state that:

“The seriousness and extent of the crimes committed in the United Kingdom, highlighted by the scope of people that these crimes affect, that these crimes continue to be committed, the wide range of perpetrators, the recurring patterns of criminality and the limited prospects for accountability at the national level, all weigh heavily in favour of an investigation”.

The news of the legal complaint has come at a good time for many (source). 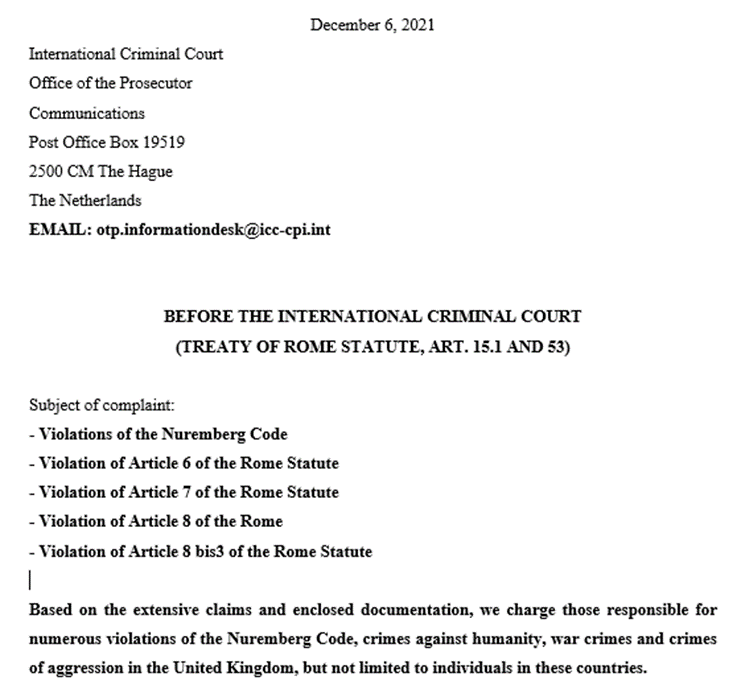 The perpetrators as listed on the document. below. 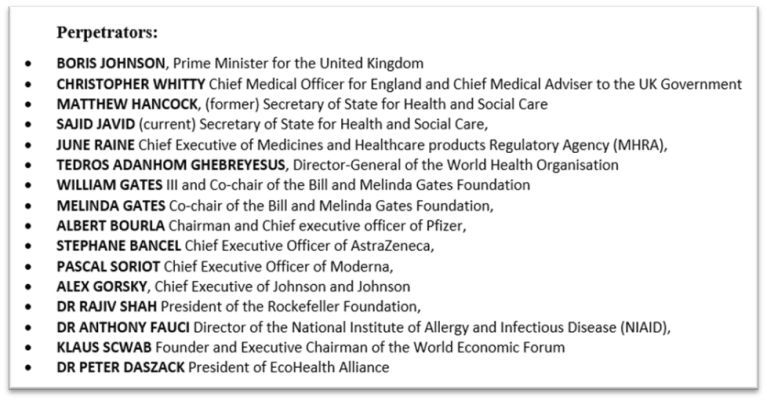 The applicants state that they have tried to raise their case through the local English police and the English Court system without success. The team is represented by lawyer, Hannah Rose, with co-applicants including:

This is exactly why the ICC has been addressed directly as if a state is unwilling or unable to carry out either an investigation or prosecution, the ICC is able to prosecute, not to replace national crime systems, but to complement them.

The team of applicants has provided the ICC with documentation detailing numerous claims which amount to violations of the Nuremberg Code, Crimes against humanity, war crimes, and crimes of aggression in the United Kingdom.

Within the complaint, the team argues that “based on the extensive claims and enclosed documentation, we charge those responsible for numerous violations of the Nuremberg Code, crimes against humanity, war crimes and crimes of aggression in the United Kingdom, but not limited to individuals in these countries”.

The applicants state that “It is our intention to present to you and detail how, in the United Kingdom this year, the Government of the United Kingdom, with its Ministers and senior officials have violated the Nuremberg Code not only in a single aspect but in many aspects”.

Through providing an over ten-thousand-word document, the team has gathered extensive evidence that are areas of concern have occurred under the guise of measures or interventions for the prevention of a “virus.”

A particularly notable and important area addressed within this documented complaint, is the fact that the number of covid-19 cases has been artificially inflated due to the inaccuracy and unreliability of the PCR testing.

Arguably, without these inflated figures, there would have been no need for the other measures and interventions that are now be classed as crimes against humanity.

The team highlight the fact that a covid death is recorded if an individual died for any reason within 28 days of a positive Covid-19 test (that was confirmed with the inaccurate and unreliable PRC tests).

The Rebranding of Flu, Pneumonia, and Respiratory Infections.

Additionally, another way the Covid-19 statistics have been artificially inflated is by the ‘rebranding’ of the common influenza, pneumonia, and other respiratory infections as covid -19. The applicants cited data from the ONS which showed that deaths in 2018 from influenza and pneumonia amounted to 29,516 and in 2019, was 26,398.”