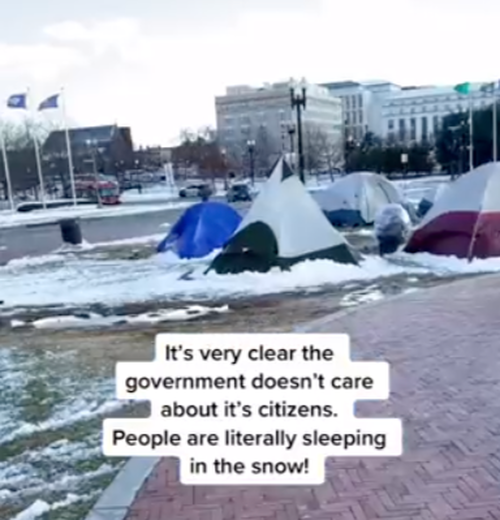 “Down the street from the US Capitol Building, right in front of Union Station, more than a dozen tents have been erected, highlighting the homeless problem in the nation’s capital.

The area outside the train station is a 16-minute walk from the Capitol Building. Lawmakers who take the train to work have to pass by this area and gaze upon the homeless who have been knocked out of the workforce and unable to afford shelter, food, and energy because of inflationary conditions produced by unorthodox monetary and fiscal policies.

RT News’s Rachel Blevins first reported on the homeless encampment outside the train station on Christmas Eve. She tweeted, “while the Mayor of DC puts an additional burden on businesses by requiring vaccine checks that divide the public into two classes of people… This is the scene outside Union Station. Dozens of tents are serving as a reminder of how bad the homeless crisis has gotten in this city.”

This is the scene outside Union Station. Dozens of tents serving as a reminder of how bad the homeless crisis has gotten in this city. pic.twitter.com/21u6SBKWLU

After two brutal snowstorms and wicked cold weather, another social media user captured the tent city in front of the train station.

The first piece I cropped put. It was a kid in SF making light of a tent city. *hence the music* The main video is of those at Union Station in DC. pic.twitter.com/DkkFjkciK1

What’s odd about this tent city, or rather a “Bidenville,” is that it’s not tucked away in an alley and empty parking lot but right in front of Union Station for the world to see.

So far, DC officials have yet to shut down the homeless encampment. There’s no word if the city has provided food and essential items for the homeless to survive the brutally cold winter.

The tent city reminds us of the sprawling homeless encampments throughout Los Angeles, San Francisco, Portland, and other West Coast cities. These metropolises have one thing in common: they’re run by liberal and progressive lawmakers. So far, handing out welfare and other services is failing as more and more people cannot rebound from rock bottom of living in tents back to everyday life. Maybe a different approach is needed.

Suppose CNN wanted to do real reporting. They should send one of their journalists to Union Station; it’s only a 5-minute walk from their DC studio.”