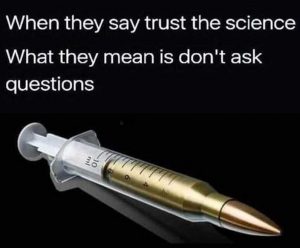 C0ViD Propaganda Roundup: How the Biomedical State Maintains the ‘All the Experts Agree’ False Consensus

The latest updates on the “new normal” – chronicling the lies, distortions, and abuses by the ruling class.

The purpose is to create a mirage of consensus in order to discourage real journalists or normal people from looking into matters themselves. This tactic is pervasive, but nowhere has it been more widely employed than in the COVID era.

Because, if three key facts were permitted to infect the public consciousness, they would inevitably result in mass upheaval of the ruling class that perches on top of society, feeding on it like vultures:

At every turn, the “experts” got it wrong.

So how does the biomedical establishment maintain the façade of legitimacy?

You’ve heard the talking point ad nauseam: “99% of scientists agree the vaccines are safe and effective.”

First of all, that figure is not vindicated by any actual polling; it’s just an offhand catchphrase.

Second, what happens to scientists who deviate from the “safe and effective” slogan?