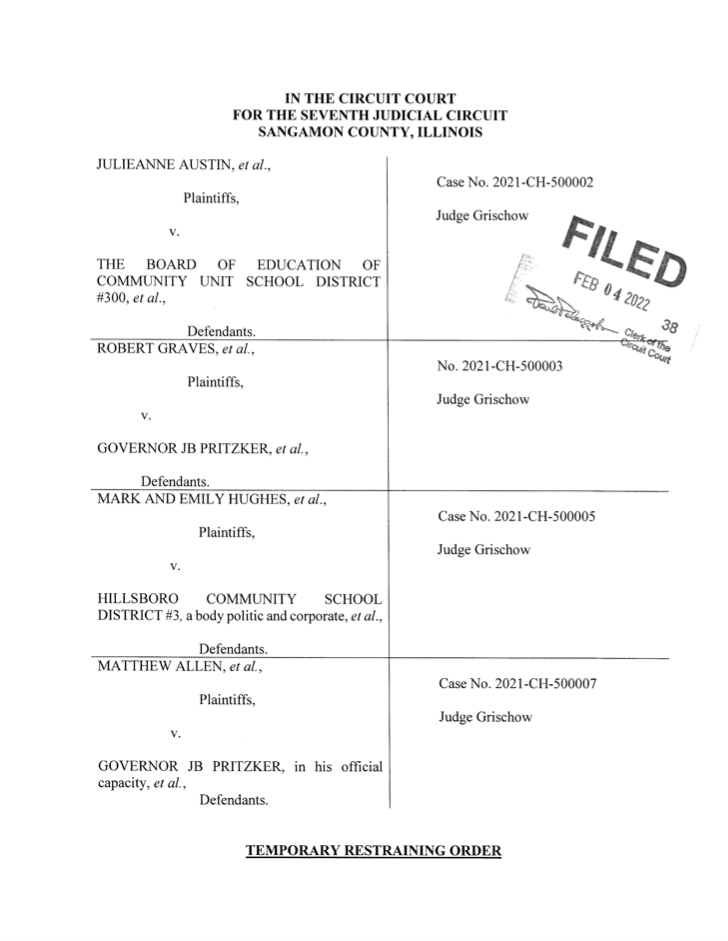 Illinois Court Halts Mask and Vaccine/Testing Rules for Schools Across the State!

“On Friday February 4, the Circuit Court in Sangamon County Illinois issued a state-wide Temporary Restraining Order, halting mask and vaccine-or-testing mandates for students and staff which had been implemented by 170 school districts. Judge Raylene DeWitte Grischow noted that since the governor declared a COVID-19 emergency in March, 2020, there have been “25 serial disaster proclamations” and 99 executive orders related to COVID-19, touching the lives of every citizen in Illinois.

The folks that filed the lawsuit include parents of kids across the state, as well as teachers. They are challenging the executive orders from Governor JB Pritzkers and the emergency rules that were set forth by Department of Public Health (DPH) and the state Board of Education implementing the orders.

The orders being challenged: 1.) directed school districts to require the use of masks, 2.) required unvaccinated school employees to show a weekly negative COVID-19 test, and 3). ordered the districts to exclude students and teachers for a set time if they were close contacts of a probable COVID-19 case and refuse to test.

Exclusion from School is a “Quarantine” Without Due Process

In reviewing these mandates, Judge Grischow focused on the right of due process, and said that during the Ebola scare in 2014, the Department of Public Health added a new definition of, “quarantine, modified” and “quarantine, isolated.” At that time, the DPH believed that exclusion from school was a type of “quarantine” and therefore subject to due process (notice and an opportunity to be heard) under Illinois law. This means that folks have a right to object to and be afforded due process.

Legislature Left Out of Decision Making

In September 2021, using emergency authority, the DPH had adopted regulations delegating the power to require vaccines, masks, and testing to local school districts. The judge pointed out that when the emergency rules were issued, COVID-19 had been around for 1 ½ years, and vaccines had been available for nine months. This time lag led the judge to doubt the existence of an “emergency.” Grischow noted that the issue she had to decide was if the governor can require agencies to issue emergency rules which, “go beyond what the Legislature intended or without utilizing the legislative branch of government.”

Grischow found that the students and staff had raised a “fair question” of likely success in their lawsuit because the state’s public health statute, and not the school Boards, are controlling authority regarding the masking, quarantine, isolation, vaccination, and testing rules made by the school districts in Illinois. She also held that the state legislature had been clear that school board authority was limited to “managing students” as opposed to public health measures. The state law is clear that the DPH cannot surrender its duties to school boards.

One Step Forward for Freedom

While this decision was based on a fairly technical statutory analysis of the authorities of the Governor, the state Public Health Department and local school boards, as opposed to a broad constitutional challenge, it does represent a stand against the COVID-19 potentials for abuse of power. Since Grischow relied on the lack of due process as set out in Illinois law, she also offered other litigants around the nation a possible path forward, depending on state laws.”